What Makes a Migratory Monarch? 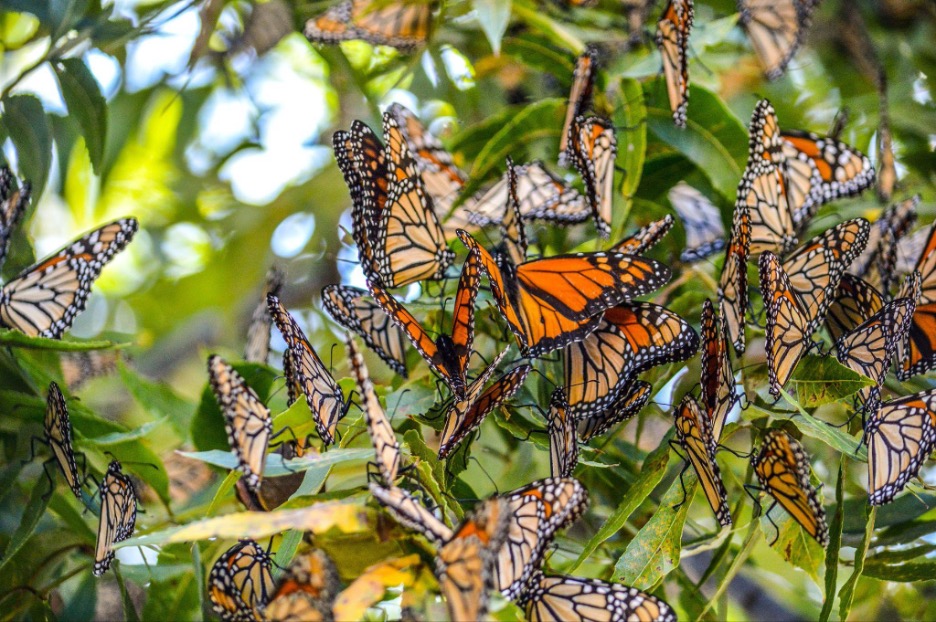 Migrating monarchs roost together in large groups that number in the millions and decorate trees with their characteristic orange and black wings. Image credit: Diann Bayes via Openverse.

When autumn arrives in the eastern United States and Canada, millions of monarch butterflies take flight, starting a 3000 kilometer journey toward their overwintering locations atop a few mountain ranges in Michoacán, Mexico. Unlike avian migrants that similarly escape North America’s cold winters by venturing south, the monarch butterflies’ migration is a generational one. The individuals that reach Mexico will never return to the northeast. Instead, their great-grandchildren return. Once spring begins, the overwintering butterflies start their mating rituals and travel north from Mexico to Texas, where they lay eggs. That new generation takes up the migration torch through the summer, following the progressive emergence of their host plant, milkweed, further north.

Each member of this summer population completes their entire life cycle within five to seven weeks, so it takes between two to four generations for the butterflies to complete their northward migration. The southward-migrating population in the fall is much longer lived. Something about their biology changes, allowing them to complete the southern journey within one lifetime. They also turn chaste, entering an altered state of reproductive stasis called diapause. When in diapause, monarchs do not produce eggs, they stop developing glands involved in reproduction, and their hormone levels change. It is almost as if a switch has been flipped at the start of fall to create a sexless, super-generation that lives two to four times longer and can travel further distances.

“You are deriving from the same population these dramatically different behaviors, but also different physiologies,” said André Green, a professor from the University of Michigan’s Department of Ecology and Evolutionary Biology. Part of Green’s research at Matthaei Botanical Gardens aims to better understand the physiological switch that is flipped in monarch butterflies to create migratory populations in fall. “Whether it’s changing gene activity, hormonal changes, or some other potential mechanism that generates the difference is what we are studying,” said Green. 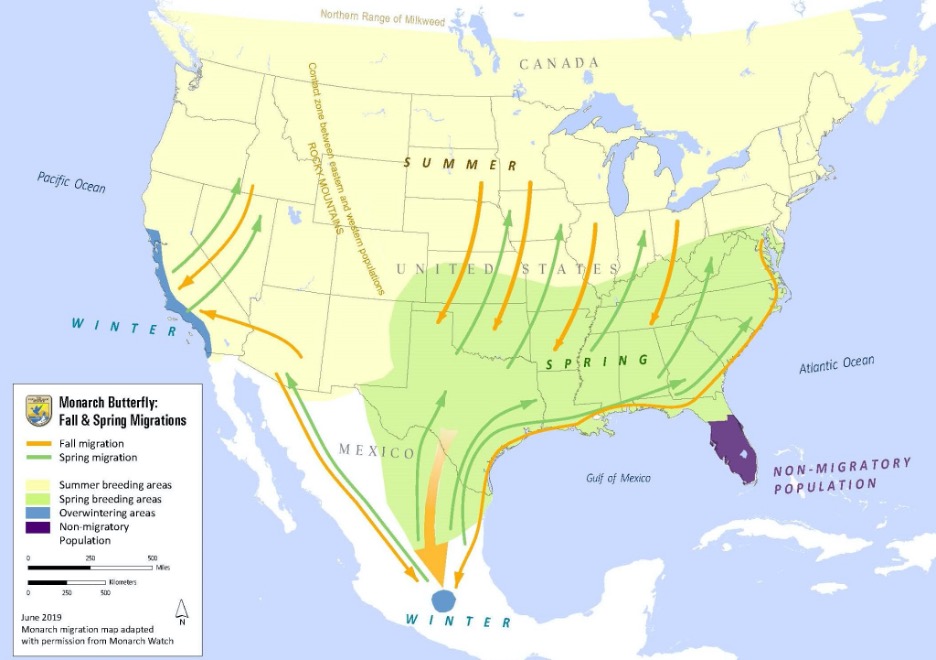 A map of the monarch butterfly migration routes in the spring and summer. Image credit: US Fish & Wildlife Service via Openverse, public domain.

Atul Pandey, a postdoctoral researcher in Green’s lab, is exploring how changes in the butterflies’ hormones might affect the onset of these migratory changes in the fall populations. His primary focus is juvenile hormones, a class of hormones that help time the metamorphosis of caterpillars to chrysalises and chrysalises to butterflies. Scientists think that juvenile hormone likely plays a role in controlling diapause because the levels of juvenile hormone in many insects decrease when they enter diapause.

But it’s not just about changes in hormones and other molecules inside the butterfly. Migratory butterflies may also perceive the world differently. That’s what Darene Assadia, a master’s degree student in Green’s lab, is testing.

“When migrating, they need to have enough lipids stored to make it to Mexico and survive the winter there,” said Assadia. “So, how they locate plants is very vital to their survival. How do they locate these plants, and is it different from how summer populations find their food?”

Assadia is testing how summer and fall monarch butterflies use their sense of sight and smell to find food plants. “These fall monarchs are migrating long distances and are exposed to many new and different environments, so we hypothesize that their senses change for that journey. In the summer, they just forage locally, and their main goal is mating,” explained Assadia. The summer populations also have to find food, but they do so in a familiar environment deemed suitable for egg-laying by their parents. Assadia thinks that these differences could necessitate a different sensory perception between the migratory and non-migratory populations.

Assadia is testing this idea by measuring how butterflies fly toward food plants using specific senses. She first places a food plant at one end of a tripod with a tethered butterfly, then films how the different monarch populations orient their flight with respect to the plant. Plants encased in transparent boxes isolate the butterflies’ sense of sight during the flight tests, and plant slurries provide the plant’s smell without any visual cues from foliage and flowers.

By experimenting with both summer and fall monarch populations, the Green lab hopes to better understand what makes a migratory monarch, but Green’s lab also takes advantage of tropical populations that don’t migrate when testing what is different about migrating monarchs. The team is still in the early stages of collecting data, so for now, we are left to marvel at one of nature’s great migrations. 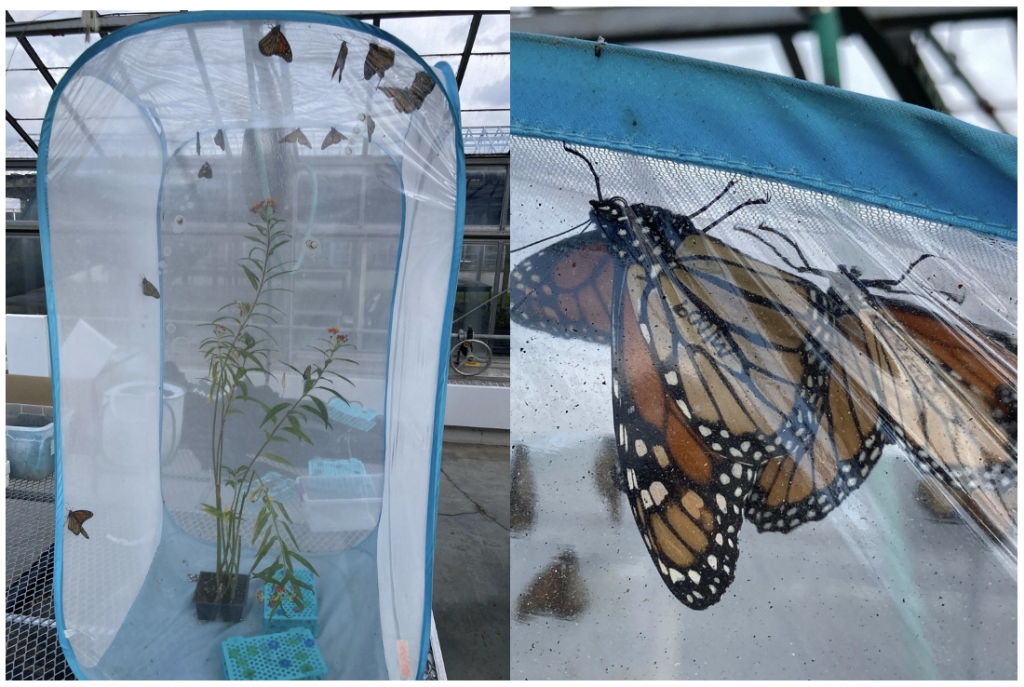 Left: A butterfly rearing chamber at Matthaei Botanical Gardens, where the Green lab breeds and raises butterflies for flight tests. According to Darene Assadia, experimenting with captive-bred butterflies is useful because wild-caught populations can have learned behaviors and experiences that could impact the study results. Right: A mating pair inside the rearing chamber. Each individual is labeled with a unique identification number.