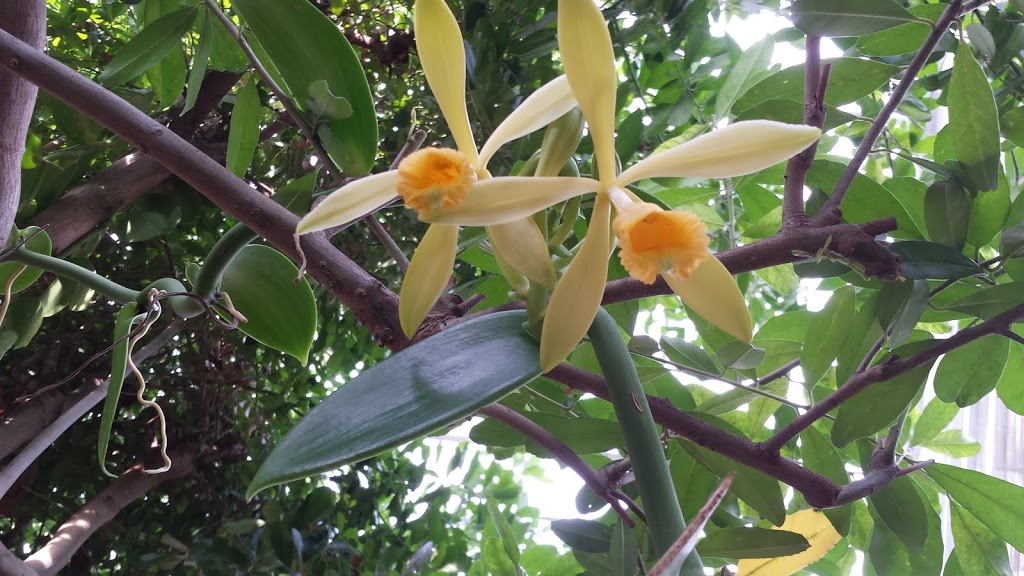 Several staff members recently noted that the vanilla orchid (Vanilla planifolia) growing in the tropical house of the conservatory had flower buds.

According to staff horticulturist Mike Palmer, it’s been close to 30 years since there’s been a blooming vanilla orchid in the conservatory. Mike says he thinks it was former staffer Connie Crancer who planted the orchid. The Vanilla planifolia orchid is native to Mexico. 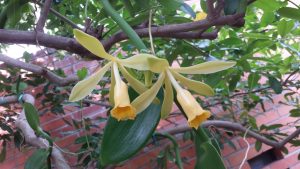 It’s not widely known that vanilla (the spice/flavoring) comes from an orchid, and a climbing vine at that. The first flowers of this orchid that was planted some 10 years ago are dangling from its vine on the yerba mate tree. Individual flowers only last a day or slightly more. Vanilla flavoring comes from the seed pod of the vanilla orchid. The pod is harvested and cured, which ferments and dries the pod. The result is the vanilla “bean” that we see in stores. Vanilla extract is made from beans that are soaked in an alcohol-based liquid such as brandy, rum, or vodka.

Mike attempted to pollinate the vanilla flower. In nature, the flower is pollinated by a native bee. In order to ensure a steady supply of pods to meet the demand for this one-of-a-kind flavoring, most vanilla orchids are pollinated by hand. It’s an elaborate, complicated process that instills a sense of appreciation for this flower and the bee that does the job in nature. Stay tuned for the result!
Some fun facts on vanilla:
1. It is the only orchid with an “edible” fruit.
2. It is difficult to get a fruit by hand pollination, unless you know the trick.
3. It is the second most expensive spice behind saffron.
4. The flowers or leaves do not smell like vanilla.