The Road More Traveled: When to Take or Change the Paths of Least Resistance

Joél Reyes-Klann
Desire path, as defined by Wikipedia: “a path created as a consequence of erosion caused by human or animal footfall or traffic. The path usually represents the shortest or most easily navigated route between an origin and destination. Width and erosion severity can be indicators of how much traffic a path receives. Desire paths emerge as shortcuts where constructed ways take a circuitous route, have gaps, or are nonexistent.”
Nichols Arboretum, the University of Michigan’s local nature temple, is a lush 123-acre landscape filled with wide valleys, rolling hills, and beautiful views, all connected by a network of trails covering more than three miles. In addition, there are countless unofficial “desire paths” created by visitors and animals traversing informal routes. The routes in turn become self-reinforced through continued use. These patterns commonly arise from a tendency of the user to exert minimal effort to get from one place to another. 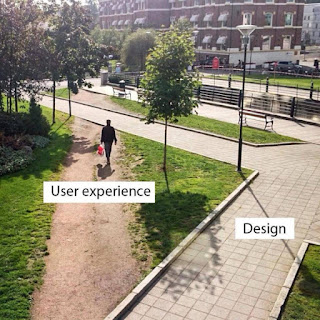 In some universities and college campuses such as Michigan State and Virginia Tech, and in countries like Finland, shortcuts have been used by landscape planners as heuristic tools for mapping out new paths, citing the idea that people will naturally choose the most efficient path and walk on it anyway. Rather than taking the foolhardy stance of always fighting back against the literal forces of nature, the thinking goes, sometimes accommodating makes more sense. For a contemporary reference that draws parallels to the natural constraints of land-use planning, lyricist Andre 3000 of Outkast says it well in an iconic line from the duo’s 2000’s album Stankonia: “You can plan a pretty picnic, but you can’t predict the weather, Ms. Jackson.”
We tend to think that the trails preserved by Nichols Arboretum are just fine. They’re safe, clean, and ready for use by runners, walkers, wheelchairs, and baby strollers. While we do our best to keep our existing network of trails intact as it is, sometimes our users seek a different way to experience the Arb. Sometimes we adjust accordingly, and allow the inertia of foot traffic a victory, and a new path to traverse. But when one of these paths of utmost convenience present an unreasonable danger to visitors or to our sensitive habitats, we’ve got options for varying contexts that can achieve mixed results, such as signage, fencing, brush-blocking, and re-vegetating paths. Below are some examples of traffic control, with lessons learned, from the Arboretum. 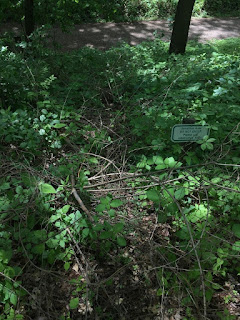 Physical barriers can be more effective than instructional signage. In Nichols Arboretum (left) we placed a sign that proved to be less effective than a pile of brush. Much of the life in the Arb consists of animals who don’t read (including the college students), so traffic control cannot exclusively take the form of linguistic signage. 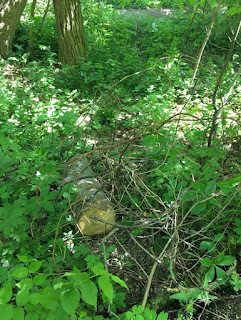 We successfully blocked a trail using a log and heaping pile of brush (right).
Sometimes we make an attempt to block a path, and it ends up moving a few feet down. And in this case, we just have to continually follow up to mitigate the problem. 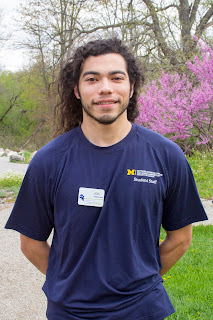 Joél Reyes-Klann, from Southwest Detroit, Michigan, is a master’s candidate at the University of Michigan School of Social Work. Joel’s internship is made possible by the Julie Norris Post Heathdale Collection Endowment. He is interested in community-based development & design, politics & policy, and civic & environmental stewardship in cities. Joél enjoys hip hop & house music, hammocking, trying new beers, philosophizing with his friends, and advancing the cause of social revolution.