The Buzz in the Gardens

Matthaei Botanical Gardens is home to two local beekeeping clubs, and each has a thriving apiary on the grounds. The gardens are the perfect ecosystem for pollination with acres of wild flowers, tall grasses, and community gardens. This is the story of a writer who dons a beekeeping suit and enters one of the apiaries for a fascinating up-close look at the world of the honeybee and the work involved with tending the hives.

On a cool afternoon last September, I found myself nervously preparing to enter an apiary of roughly 100,000 bees, in a secluded niche of the University of Michigan Matthaei Botanical Gardens.

UMBees, a student club, Invited me to observe them tending the hives. Founded in 2012, the club’s mission is to “promote, protect, and partner with the species, Apis mellifera.”

All suited up, we approached the hives—two tall columns of stackable wooden boxes—from the rear so as not to interfere with the flight paths of the bees entering and exiting the hives. Gucci Fan, a U-M senior and head of the club lit the smoker, a hand-held device filled with paper and twigs. Then, with a few pumps of the bellows, puffs of smoke wafted around one of the hives to stop the bees’ alarm pheromones so the colony would not react aggressively to our intrusion. 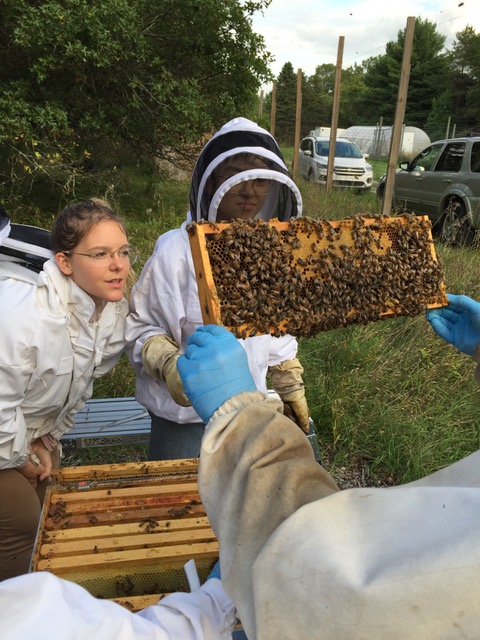 Taylor Landeryou (without hat and veil) and Gucci Fan. 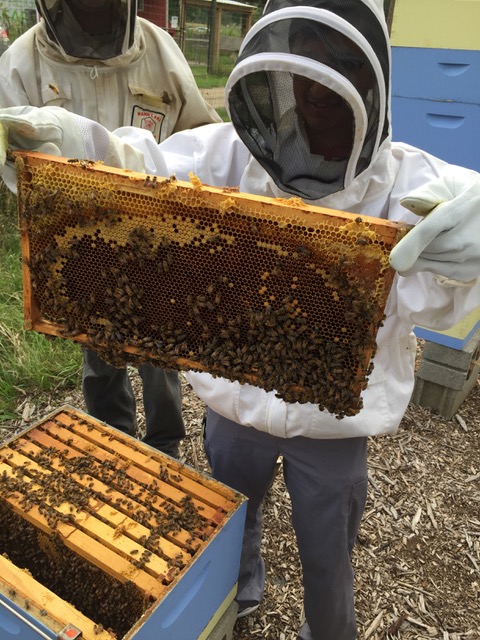 Amol Shah (foreground) holds a section of a beehive.

Faculty adviser Andrew Mills led the group and three alumnae joined us. I had met Mills at a meeting of Ann Arbor Backyard Beekeepers (A2B2), a local beekeeping club that meets monthly at Matthaei. Their apiary has 15 hives very near the UMBee apiary.

Hopping up on an aluminum bench, Fan lifted the cover from the hive, and the buzz-o-meter increased a few decibels. The buzzing was a low, rhythmic bass line complementing our work.

Next, Mills installed four quart-sized mason jars filled with sugar water and vitamins. The metal jar lids are screwed to an inner cover in the hive so the glass jars hang upside down. Tiny holes in the lid line up with those in the cover so the colony has easy access to the sweet, nutritious liquid. “We feed the colony in the fall to make sure the bees are nice and fat to help them survive the winter,” he explained. 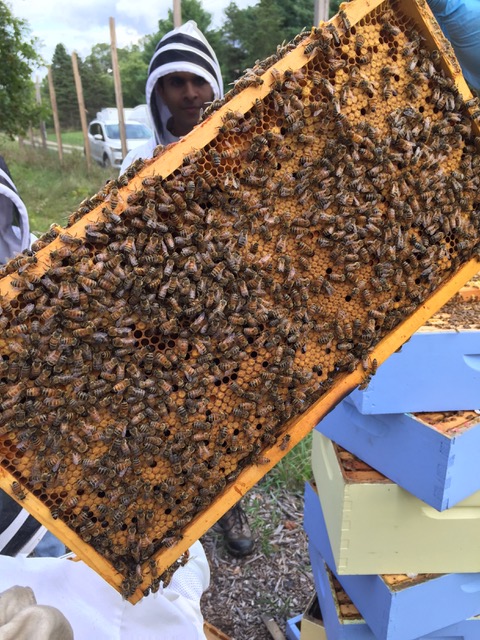 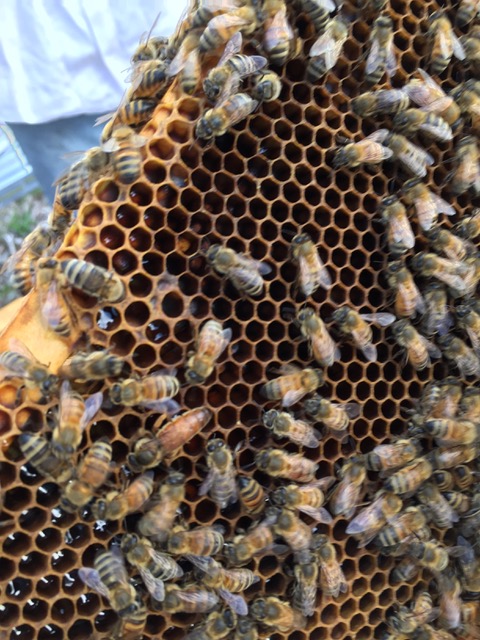 The queen is in the lower left corner of the frame. She has the longest abdomen.

Using a medieval-looking tool, Fan pried the sticky corner of a frame up and lifted it out of the hive, and then another, handing them one at a time to Amol Shah, ’19, and Anshul Kumar Kulkarni, ’19, as well as Taylor Landeryou, ’16, MS’18.

As they inspected the frames, the members of UMBees started to buzz … with excitement.

“Oh look, eggs!” said Shah, as the 19”x 9” frames were passed around and inspected by all. “The honey is just dripping!” said Landeryou. “Wow, this frame is full!” said Kumar Kulkarni.

“A honey bee egg is shaped like a grain of rice,” Mills explained. “Day one they’re upright, day two they start to lean over, day three they lie flat on the bottom of the cell. After three full days they hatch.”

Landeryou, a student program coordinator for the Zell Lurie Institute at the U-M Ross School of Business, was fearless, shucking gloves and often her headgear. “My dream,” she said, “is to get bees into the B school.” 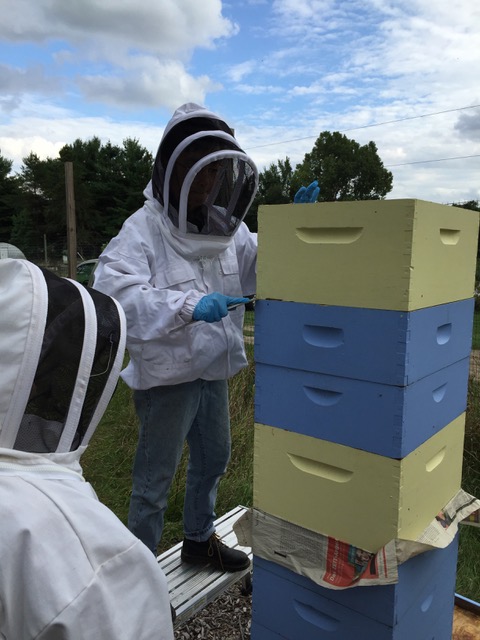 When you’re close to a vibrant, healthy colony, it is easy to forget that the Apis mellifera species is in jeopardy. Threats to the honey bees like climate change, habitat loss, and pesticides are huge. Efforts from small, grassroots organizations like A2B2 and UMBees, can make a difference to the specie’s survival.

In addition to the flowers and grasses in the gardens, honeybees pollinate most major crops including apples, melons, and broccoli. Blueberries and cherries are 90% dependent on honeybee pollination, and almonds depend entirely on the honeybee for pollination.

Every bee in a colony, I learned, has a specific responsibility. The majority of the colony is worker bees, non-reproducing females. They tend to the brood, keep the hive clean, and collect pollen and nectar. The male drones’ primary job is to mate with the queen.

But where was the queen?

With only one queen in a colony, the group wanted me to see her. A search began as frames were carefully lifted and examined closely. With each box housing 10 frames, this was not a simple show and tell.

“There’s the queen!” Gucci finally exclaimed. We crowded around and watched in awe as a retinue of worker bees tended to her long body moving gracefully across the frame.

After the hive was reassembled, I peeled off my beekeeping suit and reflected on my time in the apiary. I was honored to have had this intimate look at honey bees, majestic super heroes, so vital to our world.

Chris Hippler is a freelance writer who also owns Worker Bee Jewelry, a company that casts bees (from the Matthaei apiaries) and other natural found objects in silver and gold.