Student summer intern Alex Peters is working on getting the Medicinal Garden at Matthaei ready for its opening on August 2. She’s also a recent convert to the joys of birding. Here, Alex shares her bird discoveries at Matthaei.
Last fall I took an ornithology class at the University of Michigan and part of the lab assignment was to keep a bird-watching journal. This entailed going on birding outings, recording the species I saw and any observations, and inputting my data into ebird.org (a site where birders upload their checklists; useful for other birders and for conservation). I really love the problem solving associated with successfully identifying a bird and the sense of accomplishment when you identify a bird you have never recorded before. I have been birding in the Midwest since taking that class. One highlight so far has been going up to the Upper Peninsula with the U-M Ornithology Club to see snowy owls and shrikes.
Closer to home, Matthaei Botanical Gardens is a great place to spot a large variety of birds. The Botanical Gardens’ wooded trails and its proximity to Fleming Creek make for good habitat for many bird species. I’ve compiled a list of eleven species I have seen while working as an intern in the horticulture department, along with a map of where they were spotted. No doubt there are many more to see here at Matthaei Botanical Gardens & Nichols Arboretum!
Note: The IUCN status included with each bird is a measure of conservation status and guides conservation efforts around the world. Each species is measured on a scale (starting from the lowest risk of extinction): least concern, near threatened, vulnerable, endangered, critically endangered, and extinct. For more information about the IUCN see iucnredlist.org/. 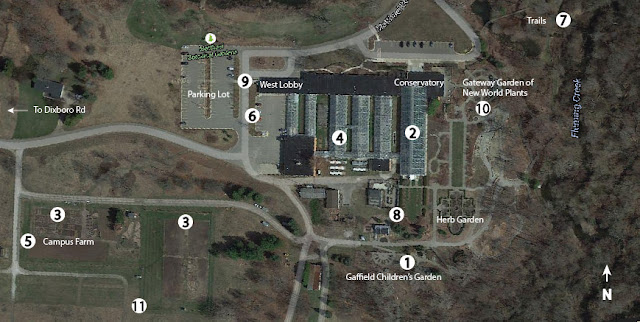