Seeing the Trees and the Forest in Nichols Arboretum 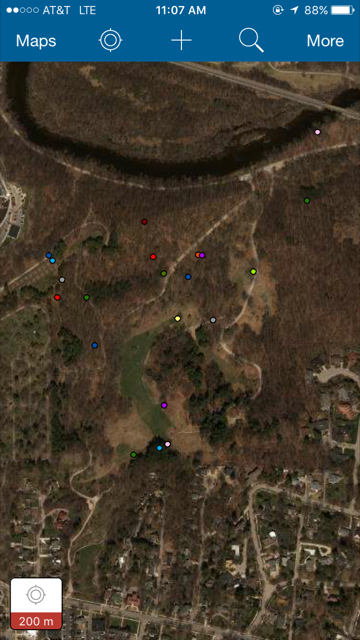 Audrey Pangallo
I’ve spent most of the first two months of my internship at Nichols Arboretum, hunting for specific species of trees. Eventually these trees will make an appearance in an app as a study tool for University of Michigan students in the School for Environment and Sustainability who are taking the Woody Plants class (ENV 436). This project is being done in conjunction with Curator Mike Kost and Matthaei-Nichols GIS specialist Maricela Avalos to create a GIS-based map of trees in the Arboretum. The project will be available as a web map and application by the end of August.
We tested the app the week of July 3 with students participating in the Michigan Math & Science Scholar (MMSS) program. MMSS offers a pre-college experience that exposes high school students to several curricula offered at the University of Michigan while introducing them to current developments and research in the sciences. Matthaei-Nichols Associate Curator David Michener conducts the annual summer sessions in the field and lab. Read more about MMSS and about the students’ visit to Matthaei Botanical Gardens & Nichols Arboretum.

The testing went very well. We split the students up into teams and had them locate 10 trees on the map. We then met up at the Reader Center to talk about how it went and to see what feedback they had regarding the map. Overall the students really found the app useful, and the average score for it was 8/10—pretty good for the very first version of the app. The students confirmed issues that I suspected we’d have. Basically, the biggest issue we have to fix is the accuracy of some of the points, and then the map will be good to go.
As I was saying about my time in Nichols Arboretum. . . . One of the things I’ve discovered about being a Nature Academy intern is that plants rule, of course, but there are a lot of other things worth discovering—birds, trees, snakes, and human-made objects, to name a few. In between hunting for trees I’ve found all sorts of interesting goodies in the Arb and I thought I’d share them with you.

This is a cup fungus. There are many varieties of cup fungi, which is a name that encompasses any mushroom that looks like a bowl. Typically, they are difficult to identify, as most of the features to tell them apart are microscopic. I found it on the ground hidden behind a log while looking for a white oak. A week or so later, I went back to check in on it and it appeared to have died.


These are quite clearly rocks. Someone was having a little fun hiding them around the Arboretum. I’m not sure who, but I did appreciate the puns (“A2 Rocks”) and the clever hiding spots along the trails.

Another mushroom. This one was huge, yet somehow still able to hide among the

plants. I only noticed it because I had to walk off trail to get a closer look at an American elm tree.


You might be sensing a pattern here… I really like finding fungi. The mushrooms attached to this black oak were too interesting to pass up. These are shelf fungi; they grow and reproduce above ground. Each year, shelf fungi add a new layer of spore tissue, so usually if you see a large shelf fungi, you’re probably looking at one that’s old.

Clearly, I was not looking at trees when I took this. Honestly, I’m not sure how anyone could expect me to pass up this American goldfinch—it basically posed for the picture. There are lots of varieties of birds to see, or just listen to, in the Arboretum. In fact Nichols Arboretum is considered to be one of the best birding spots in Washtenaw County. 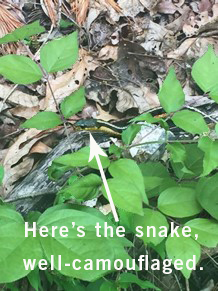 Besides birds, I also found several snakes while trekking around the Arb. After severaldays of trying, I finally got a picture of one! This kindly snake sat still for a whole two minutes so I could get this shot. The Arb is home to a lot of interesting plants and animals. It really is a little green oasis in our town. 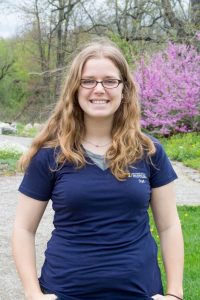 Audrey Pangallo is a second-year dual master’s student in landscape architecture and conservation ecology. This summer she is working with Mike Kost, Matthaei-Nichols curator of native plants, on creating a GIS based map of trees in the arboretum for the Woody Plants class in the University of Michigan School for Environment and Sustainability. Audrey would like to work in ecological restoration and community-based design when she graduates. Her internship is made possible by donors Philip and Kathy Power, whose gift provides support for field-based environmental education collaboration between Matthaei-Nichols and the School for Environment and Sustainability.