Science Saturday: When Seasons Collide and Shock People and Plants

Just when the early mild spring was in glorious bloom, winter’s other shoe dropped. To find out more about the impact of this week’s snow and cold on plants and trees, we turned to Mike Palmer, Matthaei-Nichols research coordinator.

Story and photos by Katie Stannard

Q. Mike, I recall a story from a Laura Ingalls Wilder book, in which there’s a very late frost on July 4. The entire family goes out before dawn to throw water on corn plants to defrost them before the sun rises and burns the foliage. Usually there’s a freeze every spring, and I race out to sprinkle lilacs and spring blooming bulbs with water to unfreeze them. Is there some science behind this?
A. (Mike Palmer): Yes, it’s like what they do in fruit orchards! They turn the irrigation on around 3 a.m. when frost begins to form. As water droplets freeze, it actually protects flower buds. Orchardists will generally check an MSU website for what the dew point will be overnight–there’s a big difference between drier air and more moist air. More moisture and snow (like Tuesday overnight), serves as a kind of insulation to protect plants. When it’s drier, and there’s no layer of protective snow, like Wednesday night/Thursday morning, more damage can occur.
For flowers in the ornamental range–after frost starts to melt it actually makes heat and starts to burn them. So if you’re sprinkling them with water, you’re providing moisture and cooling them down. Frost damage looks similar to leaves that got burned in a campfire. 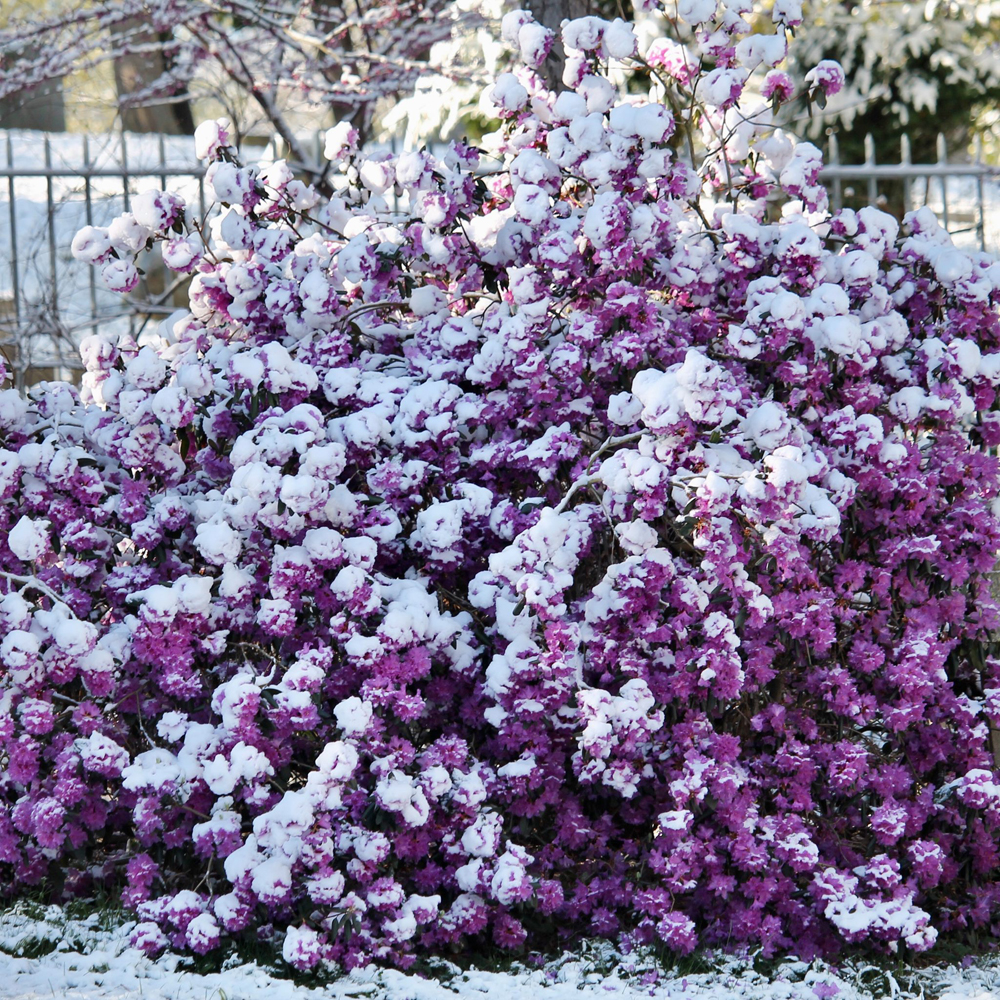 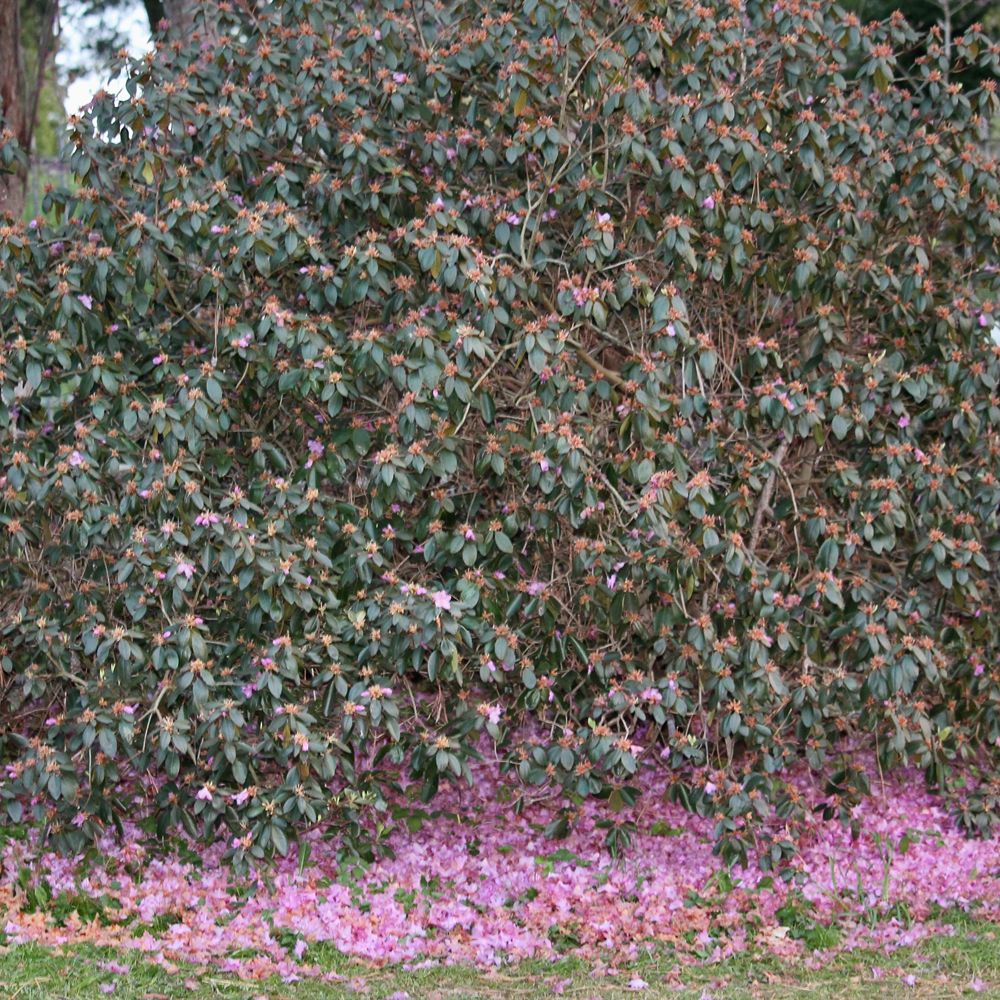 Alas, the rhododendron ‘Haughty Pink’ blooms at the Arb didn’t survive the freeze. This photo from 4/23/21 shows how the blossoms dropped off the shrub.

Q. What have you seen of damage to plants so far?
A. Flowers and flower buds are the first to be damaged, then young leaves and younger stems. It depends on how that species manages the water in their stems, and how far along they are in flowering.
People often ask “Will the freeze kill the lilacs?” At Matthaei, there’s damage to some leaves–they look water-soaked. Flower buds were just emerging from the leaves, or sides of stems due to the warm spell 10 days ago–the worst thing–it gets things going further, earlier. For lilacs, it takes time to tell; we’ll see what turns brown or necrotic.
Peonies are adapted to the temperature extremes and can manage pretty well. If there’s a cold snap at the end of May, that’s different. Sometimes when peony buds don’t open and bloom, people misdiagnose that it’s the frost, but usually it’s for other reasons. 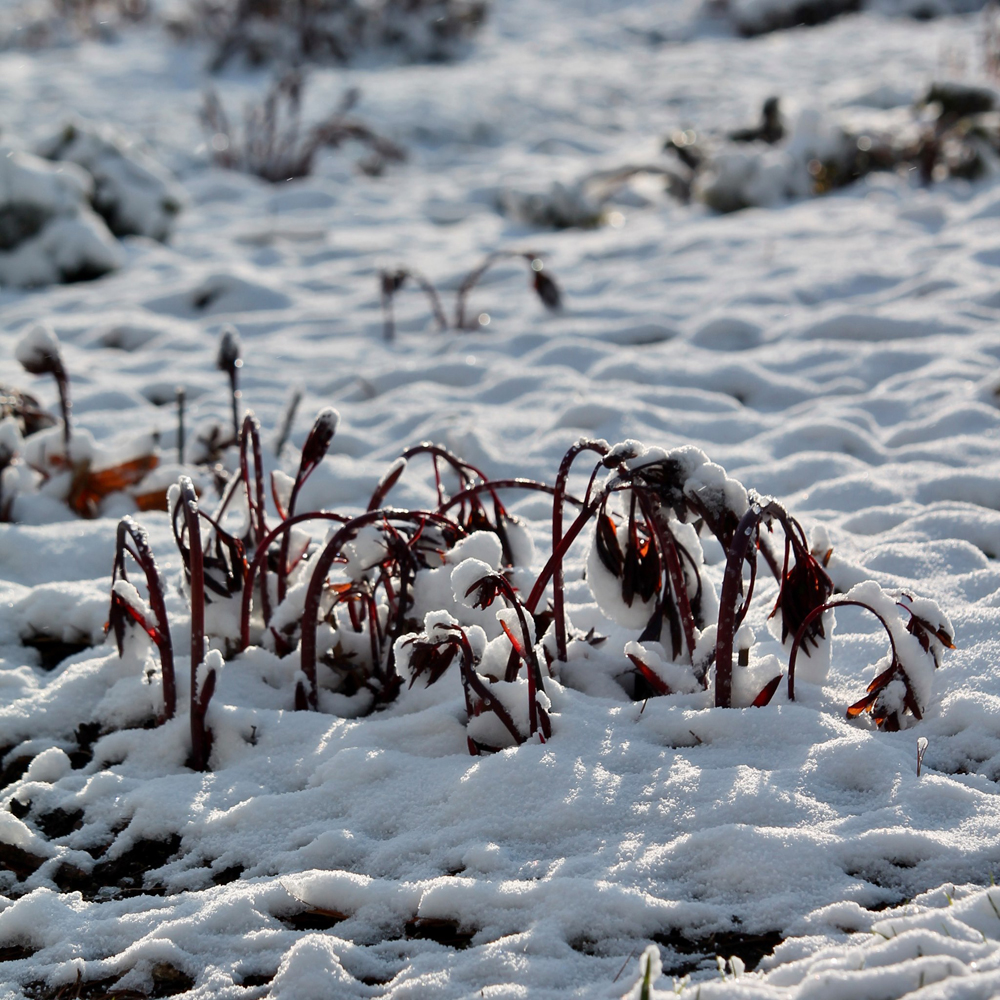 Peony plants at the Nichols Arboretum historic Peony Garden–looking like destruction on the morning of April 21. 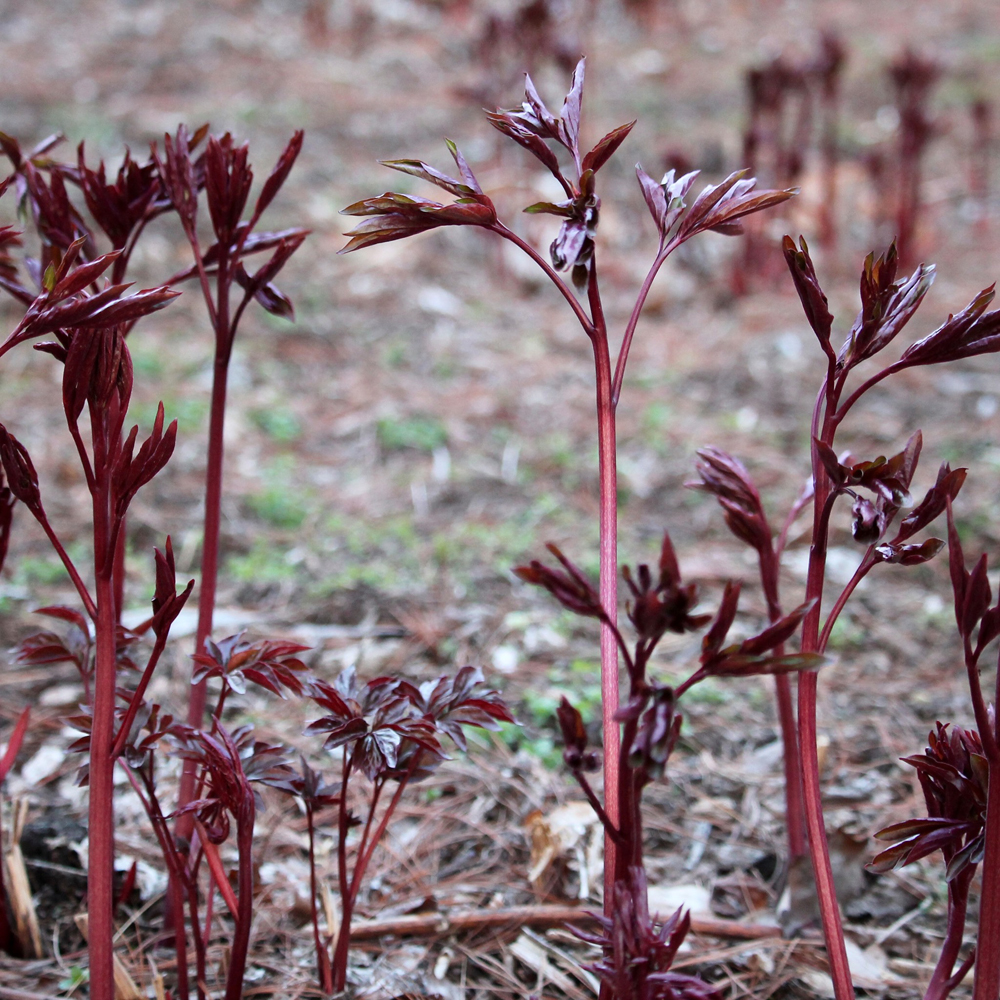 On April 23, two days after the snow and cold, these durable peonies from the Peony Garden at the Arb are standing up again, seemingly none the worse for wear!

Q. What about the impacts on native plants?
A. Native plants are always much more adaptable to fluctuations and temperature extremes. Virginia bluebells looked almost like they’d been sprayed with weed killer after the freeze. Now they look happy again. Adaptability is built into their genes. The early spring ephemerals are also more resilient.
Redbuds are native to a big swath of the U.S. As long as what you have is native to a colder region, it will probably be fine. If it’s a cultivar that originated from a southern source, there’s more potential for damage.
Native dogwoods–like the ones in the woods–will continue flowering. Ones from southern genotypes will have more damage and the flowers won’t open completely.
Exotics like daffodils are not native here. Some got tinged by the freeze, though later flowering ones will be alright. Same with tulips–the later blooming, mid-season and single late tulips that were in bud will emerge.
The saucer and star magnolias–well, after this week they look like brown tissues hanging from trees! I remember this from watching a magnolia in my grandpa’s yard. One out of every 3 years it’d get frost and we’d be bummed about it! Again, it’s a reason to plant native shrubs since they are more adaptable. Other shrubs and plants might have some peripheral damage–they look water soaked then turn brown, but new growth will emerge from the growth points.
Q. How cold did it get?
A. The weather station located at Matthaei registered low temperatures of 24 and 22 F for those days, each just 2 degrees shy of record lows. There’s a big difference between 28 degrees for several hours–and 24 degrees for several hours.
It’s usually coldest just before/when the sun is rising. Living in a town or city, there’s a heat island effect from buildings. In the ’50s, ’60s, ’70s, subdivisions were built on flat farmland. Cold air is trapped more closely near the ground and won’t drain away–which can lead to more frost damage. In town, with heat islands and changes in topography, cold can disperse more easily. 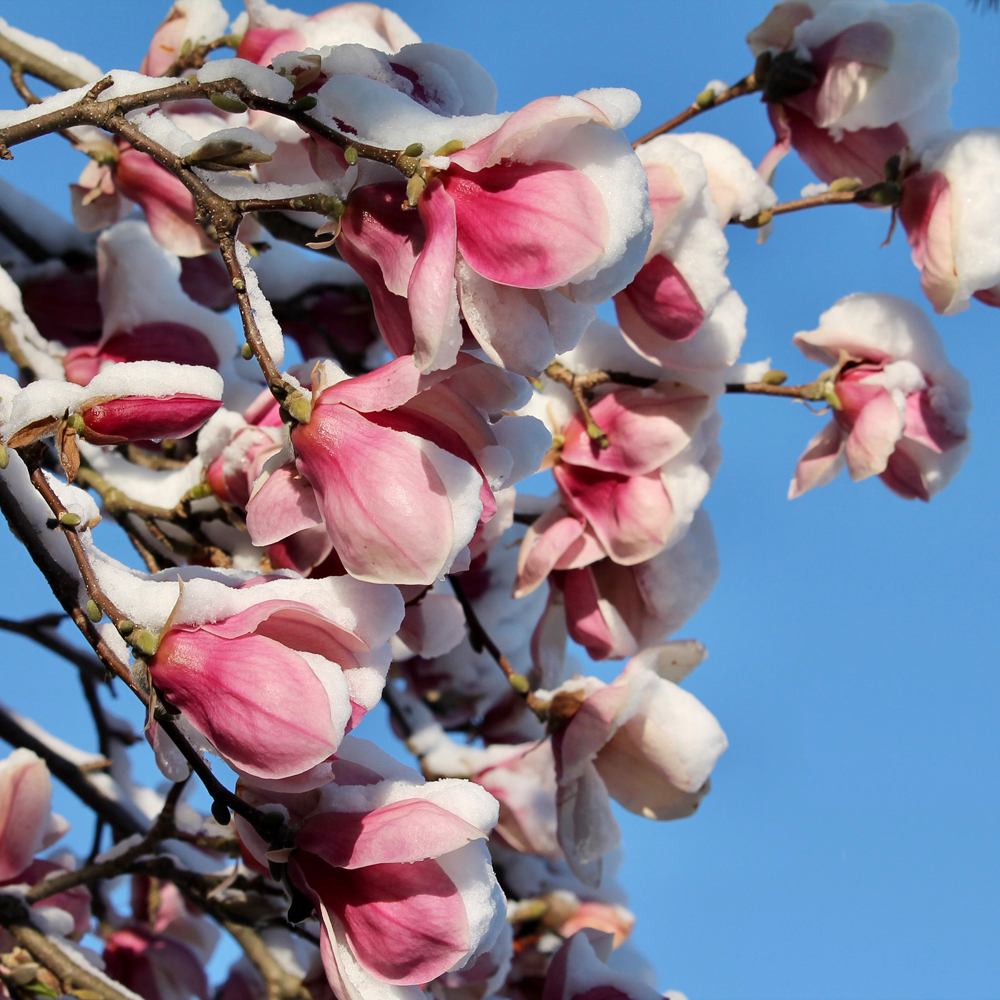 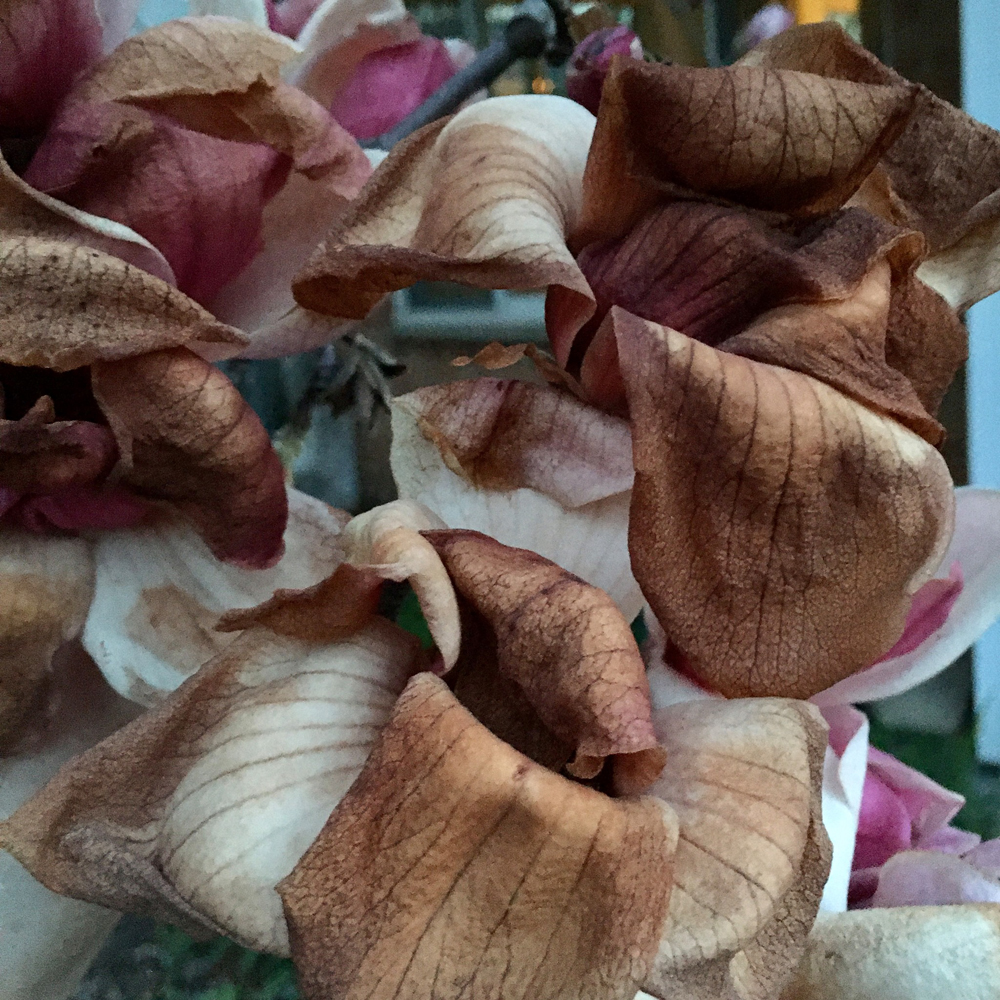 Q. How can you help your plants survive or not have as much damage?
A. Don’t fertilize any trees, shrubs, or perennials after August 1 because it promotes growth in the fall that won’t be hardened off or winterized.
Q. Is there anything that people can do when there’s a frost or freeze predicted?
A. Covering with plastic can be detrimental as it draws the cold in. Use cotton or polyester, and anchor the edges (ideally without it touching the foliage) to keep the radiant heat from the ground around the plant. Polyester frost blankets are used in horticulture for row crops like strawberries. At home, throwing something over a small or dwarf fruit tree works–and anchoring it if possible.
I’ve seen worse frost and freeze damage in the last 10 years. Ironically, some cottonwood trees were flowering before the freezes occurred this week. Maybe there’ll be less cotton–so that’s OK! Same with native and exotic maples–maybe it’ll result in fewer helicopters. There are some upsides to all of this!
Story and photos by Katie Stannard, Matthaei-Nichols.