Science Saturday: The Tale of the Curious Catkin

Have you seen any cool catkins lately, another sure sign of springtime? Though the dangling blooms on trees and shrubs are intriguing, on closer inspection, you might also notice tiny, magenta red flowers along the bracts, as on this American hazelnut, Corylus americana. Curious about catkins? Read on!

Catkins are found on species including sweet hickory, white willow, oak, birch, and hazelnut. Also known as an ament, meaning thong or strap in Latin, “catkin” is linked to the obscure Dutch word “katteken,” meaning kitten. This purrhaps re-furs to how some catkins are fuzzy or furry, or look like miniature kitten tails.

On the American hazelnut, small cream-colored inflorescences or clusters of flowers develop over the winter. They grow in length, becoming looser and more yellow as spring approaches. 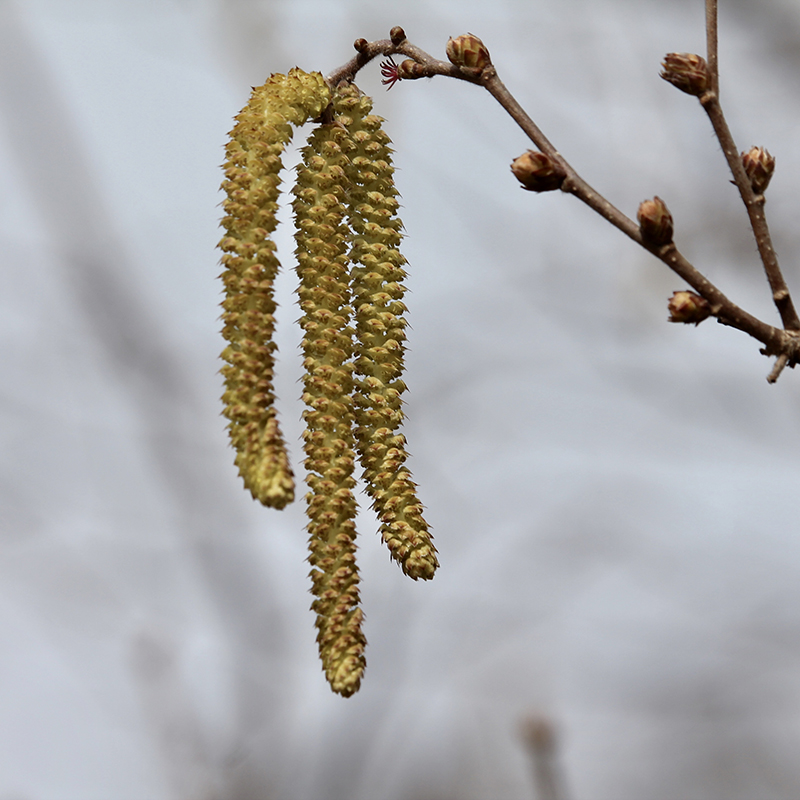 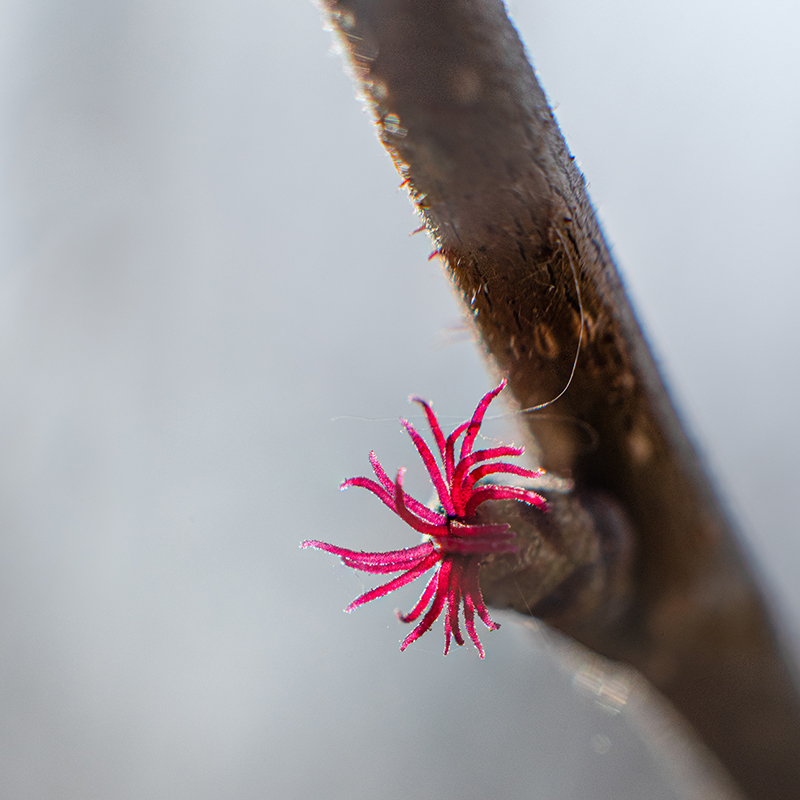 Since hazelnut is monoecious, it has both male and female flowers on a single plant–as compared to dioecious, meaning the species has separate male and female plants required for pollination. As stamens are the reproductive organs which produce pollen, hundreds of tiny male staminate flowers cluster on 1.5-3” long catkins.

Minute red blossoms grow separately out of bud bracts on hazelnut shrubs. A bract is a special or modified leaf, usually associated with a reproductive structure and sometimes different from foliar leaves. Bracts enclose pistils, or female reproductive organs; only the little red feathery stalks known as styles emerge. Styles are stalk or tube-like structures which extend from the ovary to elevate the stigma with its sticky surface to receive the pollen. If pollinated, the female flowers eventually grow into hazelnuts.

Catkins are an adaptation to aid in pollination by wind, also known as anemochory or anemophilous from the Latin “anemo” meaning wind. Generally, species with catkins don’t need other lures to attract pollinators, such as nectar, a showy flower, or fragrance, since they bloom early–even before the birds and the bees are actively assisting in their good pollination work.

Some sources say that the high volume of pollen released by catkins is linked to early-season allergy distress. Since pollen has to land exactly on the stigma for fertilization to occur, more pollen increases the likelihood of success.

Another familiar springtime sight occurs after the stamens have finished pollen release: catkins drop off en masse, leaving remnants on streets, sidewalks, and beneath trees and shrubs. Is raking it all up akin to herding cats?! We’ll let you paw-nder that one.