Dr. Goldstein is a professor at Case Western Reserve University in Cleveland, Ohio. As a scholar on Tibet, its politics, culture and language, Dr. Goldstein developed his love of bonsai and began his own collection after seeing them on a trip to China in the 1980s. After he was introduced to azalea bonsai in 2001, Dr. Goldstein began his study of satsuki, attending courses in California and making trips to Japan to select azaleas. We asked Dr. Goldstein to share some of his thoughts on bonsai and the satsuki azalea he tends.
********
Matthaei Botanical Gardens & Nichols Arboretum: What kind of plants are in the exhibit?
Melvyn Goldstein: These are satsuki azalea (Rhododendron indicum). They’re one of the most popular and prized species used for bonsai in Japan and have been so there for at least 400 years. There are more than 3,000 varieties of satsuki azaleas that vary in the color of their flowers and their leaf size and shape. 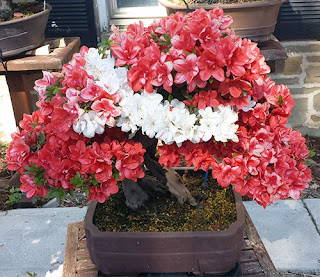 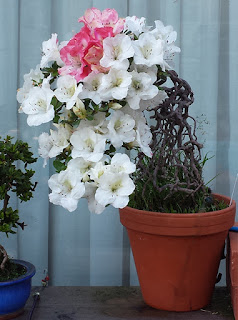 MBG: Where are the plants from, and what does “satsuki” mean?
Goldstein: All the azaleas in my collection were imported from Japan, mostly by me. The name satsuki means “5th month” because satsuki flowers are usually at their peak bloom during the last week in May and the first week in June, which is the fifth month in the lunar calendar. This is when the major satsuki bonsai competitions occur in Tokyo and Kanuma, Japan.
MBG: What makes satsuki bonsai special?
Goldstein: Satsuki bonsai are popular in Japan (and now worldwide) because not only do they exhibit an amazing range of beautiful flowers—sometimes for nearly a month—but they can also be trained to have elegant shapes. Some varieties, including ones in this exhibit, have flowers of one color, but most have different color flowers on the same tree, and many flowers are themselves multi-colored. Also, as evergreens, their striking shapes can be appreciated all year long.
MBG: You’re a U-M alumnus. Can you fill us in a bit on that background?
Goldstein: I received a BA in history in 1959 and an MA in 1960 in Russian history from the University of Michigan specializing in Russia and Mongolia. My life changed in 1960 when my advisor, Professor Andre Lobanov-Rostovsky, arranged for me to study Mongolian with a famous Russian émigré at the University of Washington. However the year I arrived in Seattle was the year after the Dalai Lama had fled from Tibet after a failed uprising. This was followed by the Chinese implementing socialist reforms including dismantling of the entire monastic system. As a consequence, the Rockefeller Foundation started a program to train new scholars in the West to study Tibet in order to preserve its cultural, historical, and religious traditions by funding seven new Tibetan Studies Centers in seven countries including the US, where the center was given to the U. of Washington. So at the same time that I arrived to start studying Mongolian, six Tibetans arrived from exile in India to teach the Tibetan language and help in research.
MBG: What sparked your interest in this particular azalea?
Goldstein: My passion for satsuki traces back to my years at the University of Michigan and my subsequent coursework and travel. Satsuki azalea, or “satsky” as they are often called, is an outgrowth of this. When China opened its doors to the outside world, I was able to get permission to start fieldwork in Tibet and came into contact with my first “bonsai” in the gardens of the hotels I stayed at in Beijing and Chengdu in Sichuan. This led me to want to raise bonsai myself, so I started studying it here and began to import bonsai from China. On one of my shopping ventures I saw a tree I hadn’t previously encountered and learned that it was an azalea that had just been collected in the mountains and that it had beautiful flowers. It’s generally thought that this azalea is at least 100 years old. I brought it home to Ohio in 2001 and still have it in my collection. I enjoyed that tree so much that I started to study satsuki azalea bonsai cultivation with a Japanese master who came three times a year to teach a course on Satsuki in Sacramento. And I began to develop my own collection by buying some of the trees he brought for us to work with, and by making trips to Japan to select my own trees since satsuki azalea are widely available there and exquisite. I now have a collection of about 40 Satsuki.