Under the direction of Kate Mendeloff of the University of Michigan Residential College, student actors perform Tennessee Williams’s  play Ten Blocks on the Camino Real this weekend at Matthaei. The production is a capstone project of the LSA Drama Major. “The play is set in an unnamed Latin American country and charts the comic and moving journey of an innocent, Kilroy, in his effort to overcome the rugged deal that life has dealt him,” Mendeloff explains.

Mendeloff says she’s been doing performances in the Conservatory at Matthaei  since 2005, when she premiered Praises and Lies, her original version of Chekhov’s The Seagull and Tennessee Williams’s adaptation of that play, The Notebook of Trigorin, which she took to the International Chekhov Festival in Moscow in June of that year.

Over the past twelve years Mendeloff has directed two different productions of Federico Garcia Lorca’s Blood Wedding and Euripides’s The Bacchae at Matthaei as well as productions of Williams’s Orpheus Descending and both The Cherry Orchard and The Seagull by Anton Chekhov.

Many faculty and students use the spaces at Matthaei Botanical Gardens & Nichols Arboretum to conduct research or to hold classes and performances, or to install architectural and art projects. Mendeloff, who also directs the annual Shakespeare in the Arb production, says she loves directing the plays in the conservatory because of how “the environment impacts the play, whether it is William’s steamy South, Chekhov’s rural estates, or the contrast of the tropical and arid environments of Lorca’s Spain or Euripides’s Thebes.” She says it’s a great challenge for her students to rehearse primarily in one space, the Keene Theater at U-M’s east Quad, and then perform in another. “The physical closeness of the audience demands that they be in character at all times, and the staging evolves organically,” Mendeloff says.

The performance of Ten Blocks on the Camino Real takes place in the Matthaei Botanical Gardens Conservatory on April 7 & 8 at 7:30 pm. Performances are free. Limited seating. 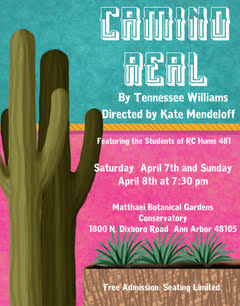