Peony Award Mystery – can you help?

There’s nothing like a good local mystery. Your help is needed with these two black-and-white photographs from the Ann Arbor Flower Show held in the mid 20th Century. These (re)surfaced recently while sorting materials in our records room. Update details are underlined and acknowledged at the bottom. 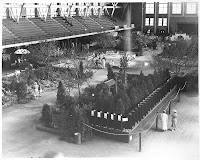 The Mystery: basic questions of where, when, who, what and why…
Where is easy. Its clearly the University of Michigan building we now know as Yost Ice Arena. [I know because I go to at least one home ice hockey game a year with friends.]

But When (1939 or 1940)? Whose Peonies? What was the Award recognizing? No doubt other questions occur to you. 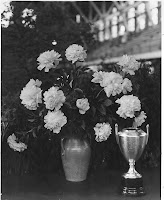 1. For both.
The undated photographer’s stamp is on the reverse of each. “Ann Arbor News  Photographer  ECK STANGER”
There is a place for the date, but it is blank.

2. For the overview-with-fountain picture.
What a period shot – just look at how those ladies are attired! For folks who know the Arena and its history of modifications, notice the end windows are glass, not filled in as we know them today. Given the vehicle access door, this must be the South wall. Its before the bleachers were extended all the way around the Arena (and my preferred seating zone – great view of the goal.)

3. For the trophy picture.
The background includes the Yost bleachers and superstructure. This award clearly “goes” with this show. The trophy is engraved, but its hard to read in the picture. I can see “THE ANN ARBOR NEWS” for the first line, and then seven (7) additional lines in a smaller font.

I’d like to know what the trophy is recognizing, who entered the peonies (are they from The Arb??), which cultivar they are (if recorded), the date, and it would be quite something if we could find the trophy itself. We know it was in Ann Arbor in the 1990s. You never know – I have two wonderfully dinged-up-by-time trophies my great-grandfather won after World War One into the 1920s at Men’s Flower Club shows in Wichita, Kansas. One was proudly sponsored by a local hardware store. Great for holding pens and pencils in my home office. Maybe this peony trophy is serving similar roles? One can hope.

PS: If it would help, I’m certain we can make a high-resolution scan of the trophy. The original photo is a full sheet – about 8″ x 10″ so there is a lot of detail.

UPDATES
1.From Adrienne O’Brien we have the fact she won this very-same Ann Arbor News Trophy at the 1990 Flower Show. She returned it, since it was to be awarded each year.