Nature Academy Internship: A Chance to Be the Educator and the Student in One Summer 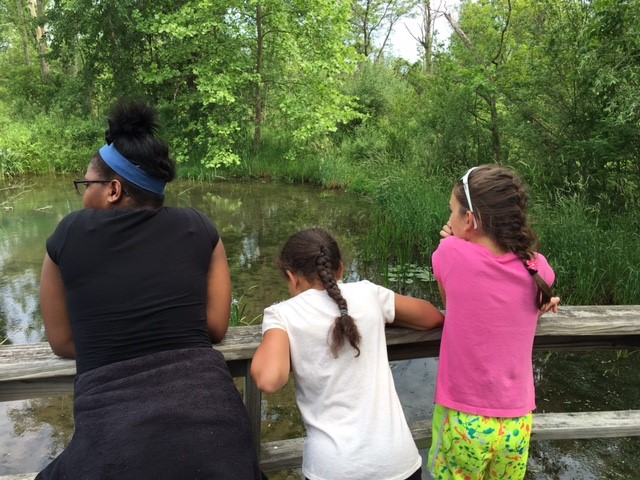 By Sabrina Mastroianni
As a youth education intern at Matthaei Botanical Gardens & Nichols Arboretum, I spend most of my mornings leading inquiry-based interpretive walks for school groups and engaging youth in various nature topics. These include plant adaptations, plant-animal interactions, ecosystems, and habitat health, among others. On a recent walk we discussed habitat health as we stopped at various points along the Sam Graham Trees trail. It was satisfying to watch my group get excited about nature and make meaningful connections between what they were learning on the trails and how it was important to their daily lives. 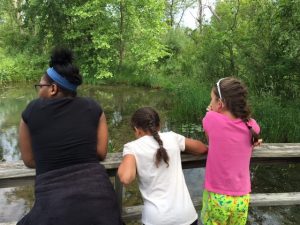 After the programs are over, it’s back to the office to continue brainstorming and creating new programs that can be used for future school and summer groups. The youth education team has also been discussing summer programs that are already in place here, such as Wolverine Pathways, Wetland Explorers (coming up July 19), and Trail Treks August 9). With these programs we hope to provide the best possible learning experience for youth.

It’s important for me as a young educator to learn as much new information as I can. I like being able to incorporate that information into the walks and programs we conduct here. At Matthaei Botanical Gardens, the interns are given the opportunity to attend informational tours led by different staff members. On June 1 I attended the peony garden tour led by Matthaei-Nichols Curator David Michener. This fascinating tour gave me the chance to step away from being the educator for a brief time and be the student again.

Prior to the tour I’d heard many great things about the Nichols Arboretum Peony Garden. Even so, I must admit I’d never seen it before, despite having worked as a florist in a previous job and having seen many peonies in that capacity. I was excited to finally see the garden in full bloom. When I arrived, the sight of the peonies took my breath away. The various shades of pink and white were stunning, and the delicate fragrance that swirled through the air was uplifting.

I immediately understood why this garden was loved so much by staff, interns, and visitors alike. It truly deserves all the credit it gets.

The tour began with the history of the garden and the origin of peonies. It was interesting to learn who Dr. W. E. Upjohn was, and how he created the garden by giving some of his own peonies to the University of Michigan to be planted in the Arb in the early 1920s.


The tour continued with David explaining the six different types of floral forms. Each form was unique, and everyone was taking pictures to capture their beauty. As we continued to weave in and out of the plots, David explained the history behind some of the names of the peonies, which was another interesting aspect of the tour. Many of the peonies were named after the wives or daughters of the grower, or after famous women.

During peony bloom season we offer a tour of the peony garden called “Famous Ladies.” Florence Nightingale and Sarah Bernhardt are two examples of peonies so named. This information added to the already rich history of the garden.

As the tour came to a close, I began to think about the days I spent arranging flowers for customers, and how I never gave a second thought to the kind of peony I was holding. I began to wonder about which particular type of peony is used in the floral industry, and how involved the process is from grower to customer. I also began to wonder what impacts the floral industry has on particular cultivars. While this tour may have raised more questions for me, the stories behind the peonies increased my knowledge and appreciation for these beautiful flowers. I will be sure to visit the garden again in the future! 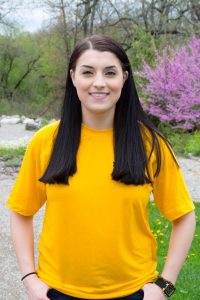 Sabrina Mastroianni is a youth education intern this summer. She is an undergraduate at the University of Michigan-Dearborn studying environmental science with a biology concentration, and she’s pursuing a GIS certificate. Sabrina’s internship is made possible by the Matthaei-Nichols membership program and by gifts from individual donors.