My Backyard Was the Woods: Matthaei-Nichols Staff Stories about Growing Up in the Great Outdoors. Part 2

How did the Matthaei-Nichols staff, whose mission is “caring for nature, enriching life,” first learn about nature? Staff members share their earliest memories and recollections—along with some vintage photos—of being introduced to the outdoors.

Given the many backgrounds and career paths traveled, one might imagine that our staff’s stories might also vary widely–hailing from different fields of study, different states or countries, and even different decades. Yet similar themes emerged quickly: the recollection of playing and living near the woods, the close proximity to lakes and rivers, combined with open-ended opportunities for exploration and unstructured play.

Each story shared here is a lyrical snapshot of childhood time in nature–of exploring, play, imagination–and the freedom to learn from the outdoors. The stories also provide a lesson for today about how we can engage the next generation with nature with nature.

In the end, this collection of stories reads like a love letter to the outdoors, and on closer inspection, a love letter of gratitude to our families. Whether intended or not, those early moments of unstructured play and outdoor exploration were very foundational to our collective interest in and support of the natural world. To our families–thank you! You let us play, and instilled in us a love for the outdoors that continues to serve us well each and every day.

Photo captions below at end of story. 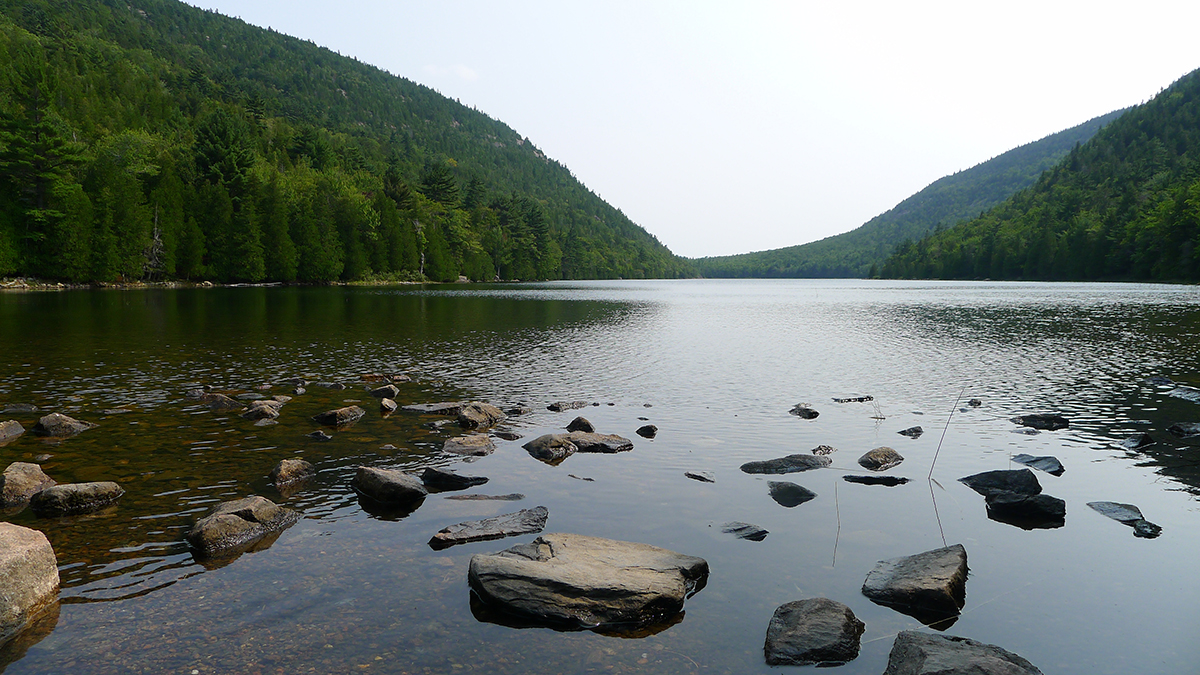 My backyard was the woods

When my grandfather retired, they moved to rural Michigan and built a house on a river. We spent our vacations going to visit them, and I explored the river and the woods. My parents thought it would be a good idea to move from metro Detroit to Roscommon when I was 5. I spent a lot of time running around in the woods and exploring with friends who lived within walking distance. My backyard was the woods. We’d just go outside and play–and there was a lot of snow up there to play in! 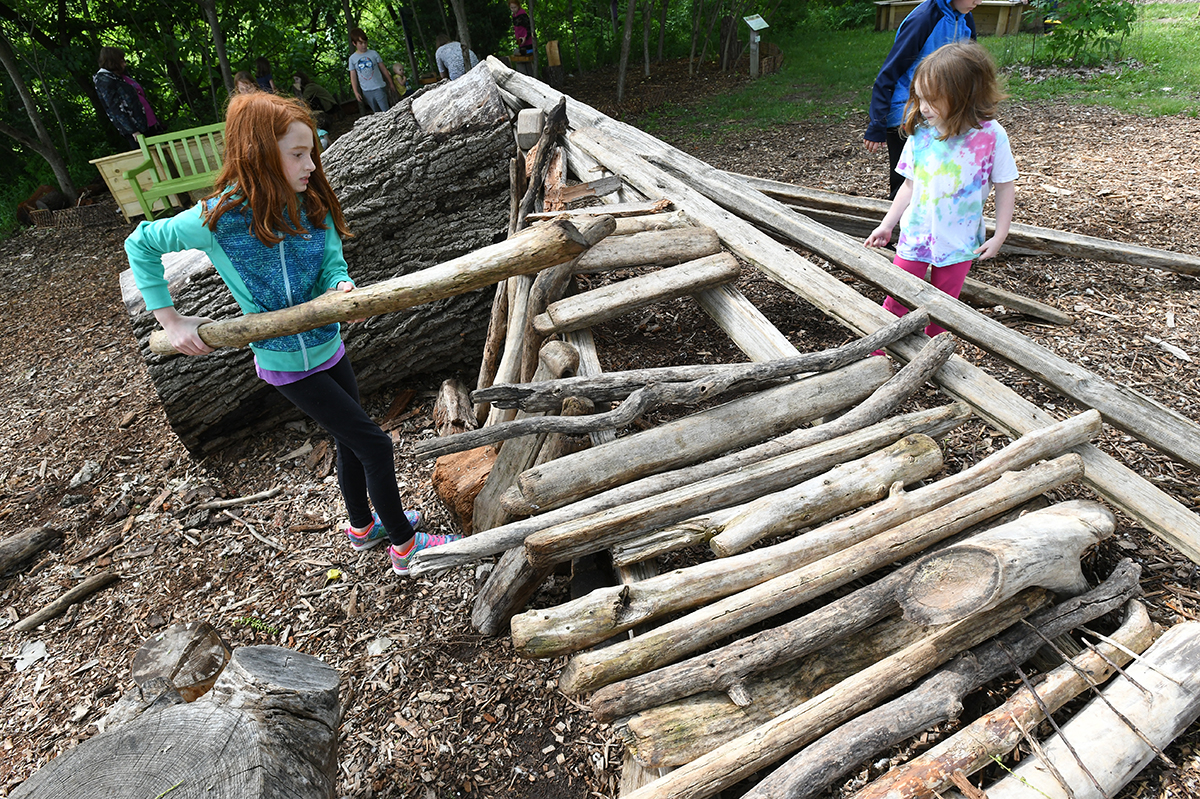 My  mom was an early childhood educator and director of cooperative nature-based, play-based preschool with inside and outside classrooms. We’d go camping, and would visit nature preserves, botanic gardens, taking in as many outside activities as we could. Perhaps it was the time and place, but we spent more time outside than inside, and unstructured time. When bored, we’d go outside.

As I’ve gotten older the things we have to do take over from the things we want to do, and the unstructured time is not there as much. When I get stuck on something I’m working on, I go outside. In times of uncertainty like this time in the world with all that’s going on, I go for a walk and listen to the birds and unplug. 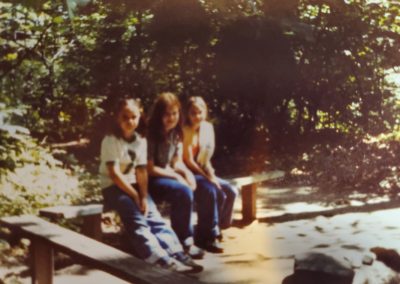 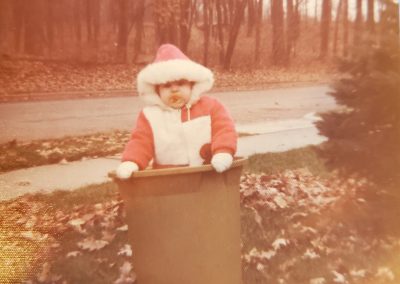 Matthaei-Nichols HR & Financial Coordinator Rachel Bernecker, about 2 years old. Rachel is in the front yard of her parents house in Ann Arbor.  “I can only imagine that my dad was raking and I was “helping,” she says. “I vaguely recall that he would use me to push down the leaves in the compost bin.” 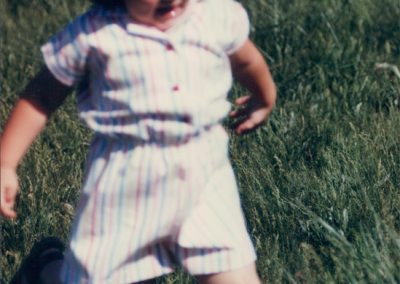 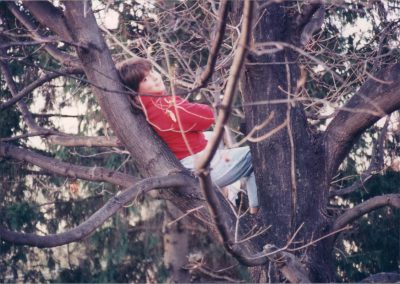 Matthaei-Nichols Director of Development Meredith Olson liked to climb trees. “I used to climb that maple tree in our backyard and sit up there for hours just thinking about the world,” Meredith remembers. 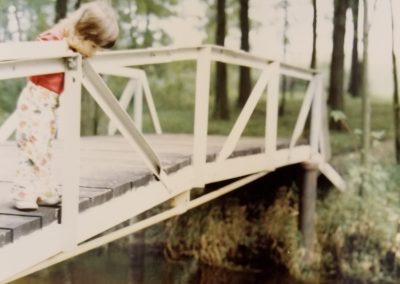 Matthaei-Nichols Administrative Assistant Nicole Frizzell, age 2, looking over one of several bridges at her grandparents’ property in Mecosta, Mich. Her grandparents lived right by the river. 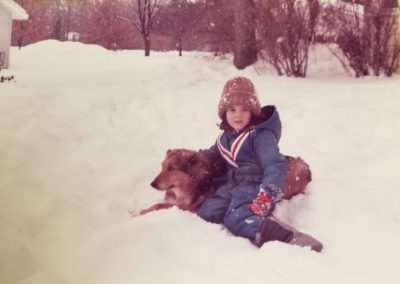 Matthaei-Nichols Administrative Assistant Nicole Frizzell, about 4 years old, at her house in Roscommon, Mich., with the family dog Gypsy. 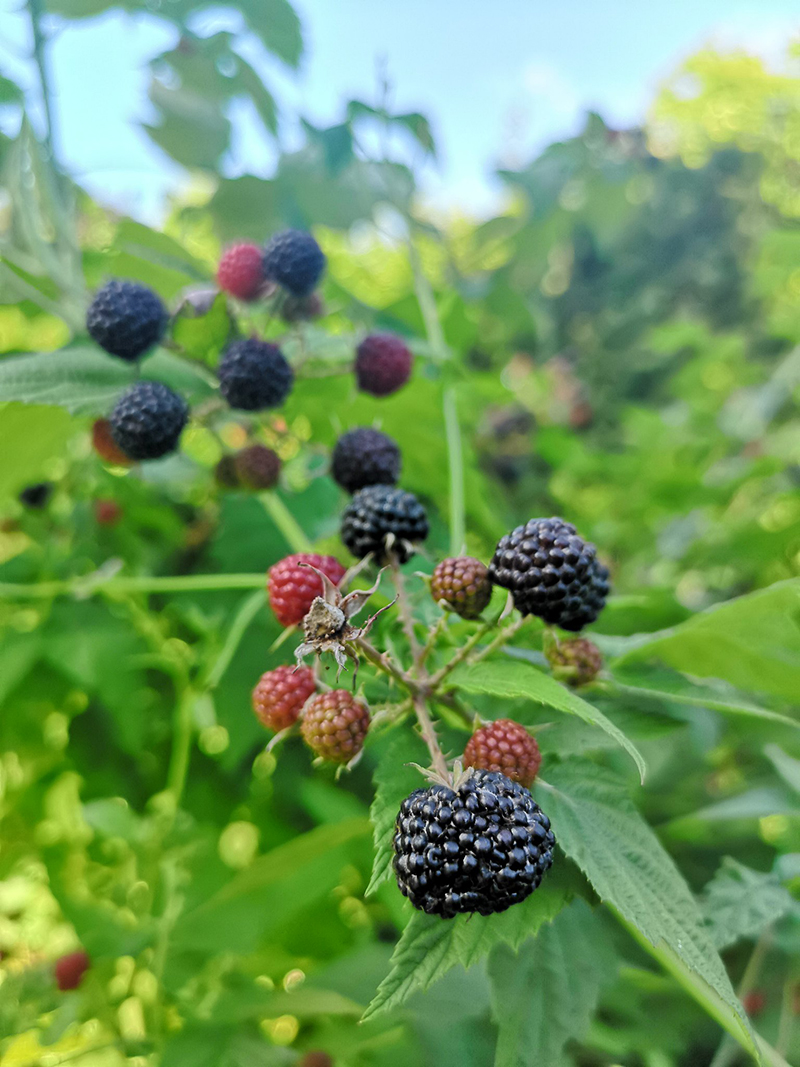 A bike and the woods was what I had

My parents have always enjoyed being outside and often took us to outdoor spaces. Living on the edge of town, there was an area behind our house of unoccupied land. Our backyard flowed into this other space with woods, open space and black raspberry bushes where I’d pick black raspberries by the bucketful. My parents also had a big garden. Usually play was with another neighborhood kid or sibling or by myself. The other anchoring point was that my grandparents had a farm an hour away and I would go to stay with them. They had livestock, and other activities included walking back to their woods, going to look for spring wildflowers and leaf picking. Most of the time if you could be outside you would do that. I don’t think I ever felt forced to be outside; it was just the primary choice. A bike and the woods was what I had. 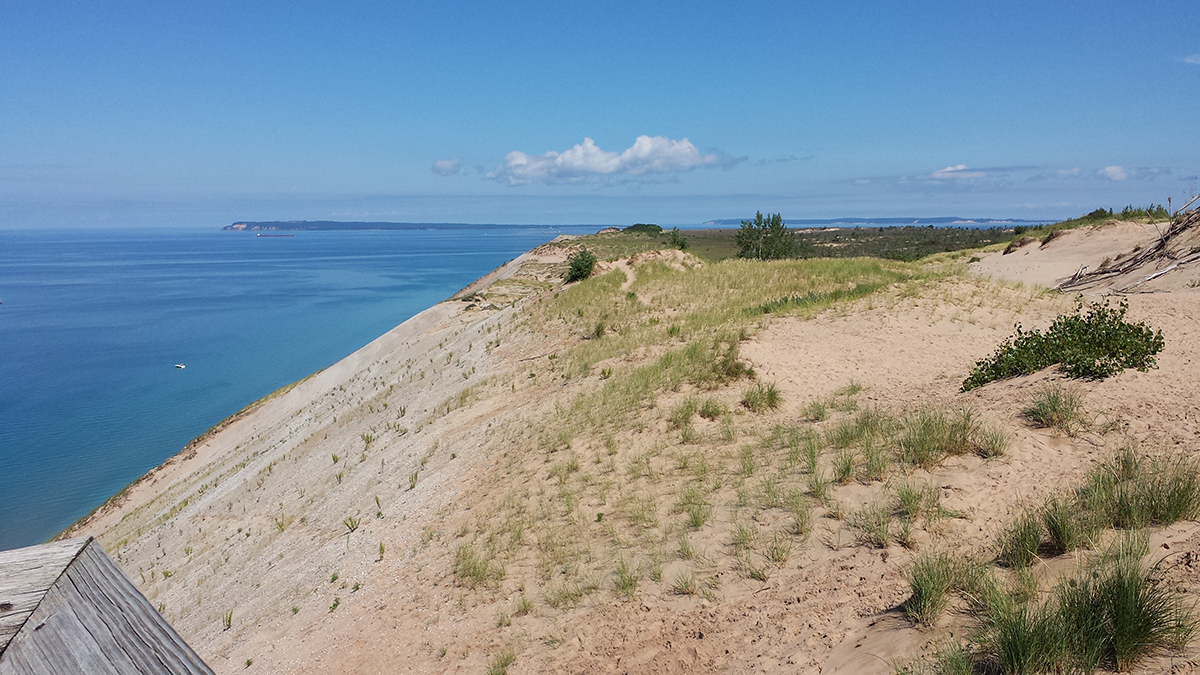 Outside more than inside

My outdoor experiences have been the defining parts of my life. I grew up as an only child in the woods, living north of Holland, Michigan, in a pretty undeveloped part of the county a mile from Lake Michigan on 10 acres of woods with beech, oak, and sand dunes. My grandparents lived on five acres just next door, and we were next to another 100 acres. When I was a little older I could ride my bike to Lake Michigan. I loved it and craved the outdoors. Though I still watched my share of TV growing up, I was outside probably more than I was inside. I don’t remember my parents telling me to go outside, but do remember them calling to find me, like when I was outside for two hours in sub-zero winter weather.

When I was a young teenager, my parents bought property on a lake in mid-Michigan, adjacent to thousands of acres of state land. This opened up another layer of exploration for me including backpacking and camping in the woods on my own or with a friend. When I landed at Michigan Tech, I really found my place in the Upper Peninsula, surrounded by the rocky beaches of Lake Superior and the hundreds of acres of forest. I loved every bit of the U.P. 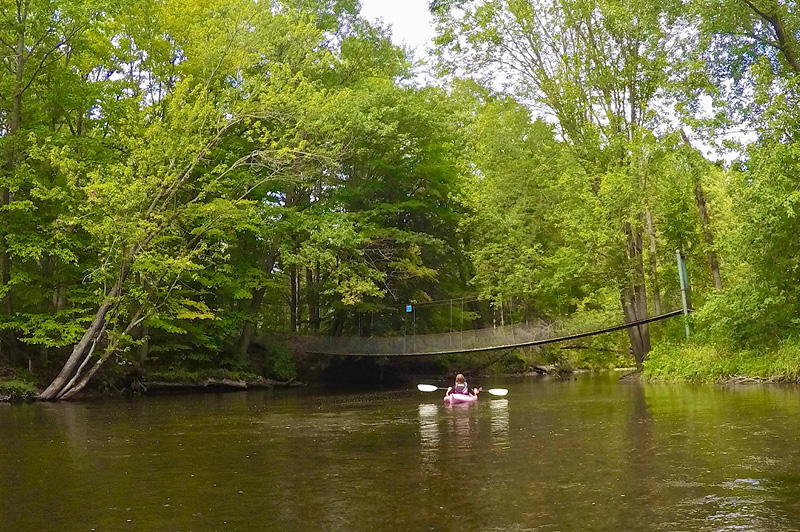 It wasn’t until graduate school that I heard our connections with nature often occur at a very young age, often instilled by a particular person. I recall two very different introductions to the outdoors. On my dad’s side of the family, we’d go camping in the U.P., and go to state parks where we could explore. It wasn’t really botanizing, just really being a kid. It was through my mom’s side of the family that I saw my first carrots, and remember collecting rhubarb for pie. Just being around gardens and nature with family was such a big part of it.

I grew up on the Chippewa River in Mt. Pleasant in a neighborhood with 12 families, including one family that had pigeons and chickens. There was a little island created from an oxbow. You’d wade across the river to the island and it was like you were in another land. We had a 16 foot aluminum Cadillac boat that we’d go boating in. We still have that boat today! (I just moved it a few weeks ago for my dad!)

I remember one time rowing in the U.P. when there was a really strong downwind. I felt powerful, rowing so strongly and with force… until I realized that it was really hard to row back, against the wind. It was exhausting to row straight in the wind, which was a powerful lesson and reminder I think of even today: Whatever you’re doing, always check the wind direction!

The Gaffield Children’s Garden at Matthaei. Photo by Michigan Photography.