Mushrooms, the Hidden Gems of the Forest

By Andrew Harmon
This summer I worked with the Natural Areas team at Matthaei Botanical Gardens & Nichols Arboretum. Over the course of four months we scoured hundreds of acres on four properties, finding and removing invasive plants and conserving precious habitats. Aided by an unusually wet spring and summer we also found a plethora of fascinating fungi, gems of color peeking out from the leaf litter. With fall just around the corner it seems appropriate to introduce just a few of the many fungi that can be found around the Matthaei-Nichols properties.
Every fall mycophiles take to the woods, poring over dead stumps and downed logs in their search for mushrooms. These mushrooms are the ephemeral reproductive structures of organisms that are almost invisible throughout the majority of the year. They are valued for their culinary uses, medicinal properties, strange and unique forms, and beautiful colors.
Although many mushrooms are cosmopolitan species that fit into very broad ecological niches, many also rely on very specific environmental conditions. For example the oyster mushroom (Pleurotus ostreatus) can be grown on straw soaked with diesel fuel. In contrast the American matsutake (Tricholoma magnivelare) is only found in jack pine forests, and even then not often. Some research has even indicated that the abundance of certain mushroom species can be used as a proxy indicator for forest health. Most of the mushrooms described here were found in some of the best areas of habitat that we manage. Their presence tells us that these are areas with a rich diversity of living things, many of which are not easily observed, and that our conservation work is helping to sustain these increasingly uncommon habitats.
Caution: Fungi constitute an important and delicious part of the cuisines of many cultures. However, fungi in general are poorly understood relative to other organisms, and even highly trained professionals cannot always agree on what to call certain species. In fact many mushroom species, including some of the popular edibles, have recently been found to actually be groups of several different visually identical species that may or may not be equally edible. Added to this confusion is the fact that certain fungi—which look, smell, and taste delicious by the way—contain some of the most potent toxins found in nature. If you are interested in learning more about fungi for fun or feasting I highly recommend that you seek the expert guidance of an experienced forager, take a class in field mycology, or look for guided forays with local mushroom hunting clubs (often called “guilds”).

Author’s note: While preparing this post I turned to two sources for invaluable information and guidance. One is mushroom expert Michael Kuo’s website mushroomexpert.com; the other is George Barron’s book Mushrooms of Northeast North America (Lone Pine, 1999).
. 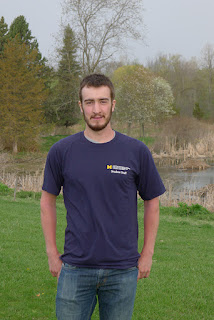 Andy Harmon, from Kalamazoo, Michigan, is working on a Master’s of Science in Natural Resources and Environment with a concentration in Conservation Ecology and Environmental Informatics. His interests include Midwest agricultural landscapes that support biodiversity through agroforestry practices. Andy’s internship is funded by the National Fish and Wildlife Fund.