Matthaei Volunteers Monitor Nest Boxes to Give Homes to Bluebirds

A nervous eastern bluebird on the wing alights on a tree branch, its orange breast standing out amidst the lush, late-summer greenery. Nearby on metal posts are a pair of wooden boxes. The bird keeps a concerned eye on a group of three volunteers trudging through knee high vegetation toward the boxes.

The bird is concerned because it is a parent and the volunteers are here to check on its hatchlings inside the box. Before opening the box, the volunteers gently knock to make sure no other adults are home. After unlocking a latch that protects the box from predators, one of the volunteers, Bill Moran, uses a mirror to peer inside. In the box, Bill finds four baby bluebirds cuddled together in a pine-needle nest. Their eyes are still closed, and they are nearly naked, their only feathers awkwardly sparse down.

The volunteers record the number and species of the hatchlings, close up the box, and move on to the 19 other nest boxes that comprise the “bluebird trail” located throughout the Matthaei Botanical Gardens. Starting in March and continuing through September, the volunteers monitor each box weekly. Afterwards, the volunteers will clean the boxes, make any necessary repairs, and report the season’s total number of successfully fledged birds to the Michigan Bluebird Society, an organization dedicated to helping the nesting success of native, cavity-nesting birds. 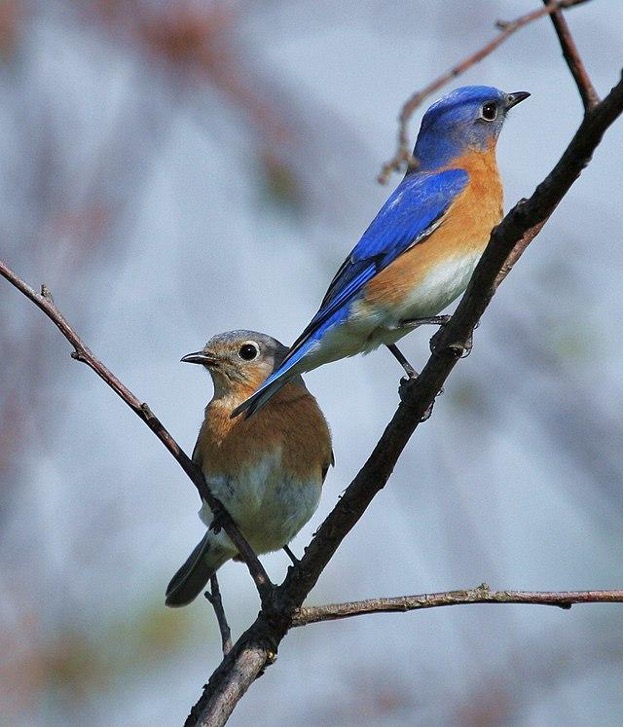 At the core of the Matthaei bluebird volunteer team is Vicki Davinich and her husband, Bill Moran, alongside Ruth Hart and Frank Papp, the volunteer Washtenaw County coordinator for the Michigan Bluebird Society. The quartet have provided the essential labor to monitor the nest boxes since they were originally installed in November 2017 for local Boy Scout Sam Carter’s Eagle Scout project. The boxes’ first breeding and monitoring season in 2018 was led by Murphy Harrington, a former, temporary conservation technician at the Matthaei Botanical Gardens and affiliate of the Michigan Bluebird Society. Since Murphy left, Matthaei volunteers have taken the reins on the monitoring effort with Frank’s help.

The volunteers monitor nest boxes to prevent invasive bird species from competing with bluebirds and other native, cavity-nesting birds for nesting sites. The competition can be fierce, culminating in deadly turf wars that are a major cause of bluebird nesting failure. In their citizen science study, the Cornell Ornithology Lab found that around ten percent of bluebird nests were usurped by house sparrows, one of the more troublesome avian invasives.

During his time as a birder and county coordinator, Frank has witnessed many these turf wars between house sparrows and native birds. They make for enthralling stories; some particularly aggressive skirmishes involving multiple nesting pairs resemble the familial conflicts of fantasy dramas like Game of Thrones. In one standout case that Frank recounts in the Michigan Bluebird Society’s Spring 2019 newsletter, a pair of house sparrows had built their nest on top of an active tree swallow nest (another native cavity-nesting bird). Had Frank not intervened, the tree swallow hatchlings would have likely suffocated or starved.

The struggle for nesting sites is so dire because bluebirds and other secondary cavity-nesting birds cannot excavate their own nesting cavities; instead, they need to find one. When not nesting in man-made structures, secondary cavity-nesting birds will nest in burrows made and abandoned by other birds (such as woodpeckers) or hollows in naturally decaying wood. Such suitable nesting cavities can be limiting resources that cap bird population sizes, so native birds cannot build their nests when invasive birds hog the limited real estate.

Since their introduction to the US in the mid 1800s, house sparrows have spread across North America and now number 82 million. This boom in invasive birds may have reduced bluebird numbers, which decreased by 90 percent through the 1930s and 1970s. Other factors probably also contributed to decreasing bluebird numbers: habitat loss; pesticide use; some severe winters; and the clearing of dead trees in managed woodlots, which reduced the number of natural nest cavities.

Today, bluebirds are better off. Their breeding population size is an estimated 23 million and is stable or increasing in some areas. Although there are no formal studies that explicitly prove it, nest boxes installed by private landowners and organizations like the Michigan Bluebird Society are credited with restoring bluebird populations to their current numbers. While decreases in house sparrow numbers might have also helped bluebird numbers rise, the sheer number of nest boxes installed throughout the country lends support to their impact on native bird populations. Today, nest boxes are provided by 27.4 – 34.9 million American households. These human-made homes tend to be in areas with a higher diversity of cavity-nesting birds and may even have become bluebirds’ preferred nesting cavities in some areas.

But for a nest box trail to be productive, it needs to be monitored for invasive birds. According to Murphy Harrington, unmonitored nest boxes may even do more harm than good by harboring invasive birds. Kurt Hagemeister, president of the Michigan Bluebird Society agrees. “Unmonitored boxes are typically much less productive,” said Kurt. “We issue grants for groups to install nest boxes, but we won’t do it if the groups are not actively monitoring their boxes . . . Our recommendation for someone unwilling to monitor a box is that they do not put it up in the first place.”

At Matthaei, volunteers will humanely remove any house sparrow nests and eggs that they find during their weekly monitoring. Matthaei volunteers typically find and remove eggs from the nest boxes before birds hatch from them. Volunteers uncomfortable with removing eggs and nests are not forced to do so and can ask Frank for help.

Murphy likens their nest box efforts to a fire, saying that “you have to keep adding to it to keep the fire going.” To keep that fire alight in the future, a steady stream of new volunteers is essential. “Vicki and Frank are the only long-term people left doing this, and seeing the project go would be detrimental to that bird population,” said Murphy.

According to Vicki, new volunteers have a lot to gain by monitoring bluebird boxes; she thinks it is a great way to learn about and better connect with nature. “I didn’t know as much as I know now about bluebirds, and there is no other way I could have learned all this,” said Vicki. “I can only listen to people talk for so long about birds they have seen. I needed to actually experience it for myself, and I think it would be a good hands-on experience for other people who like birds.” 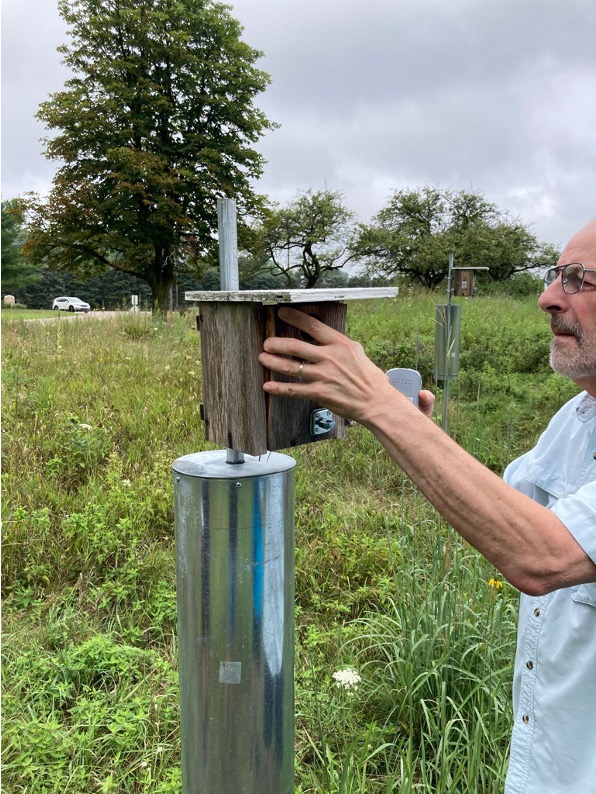 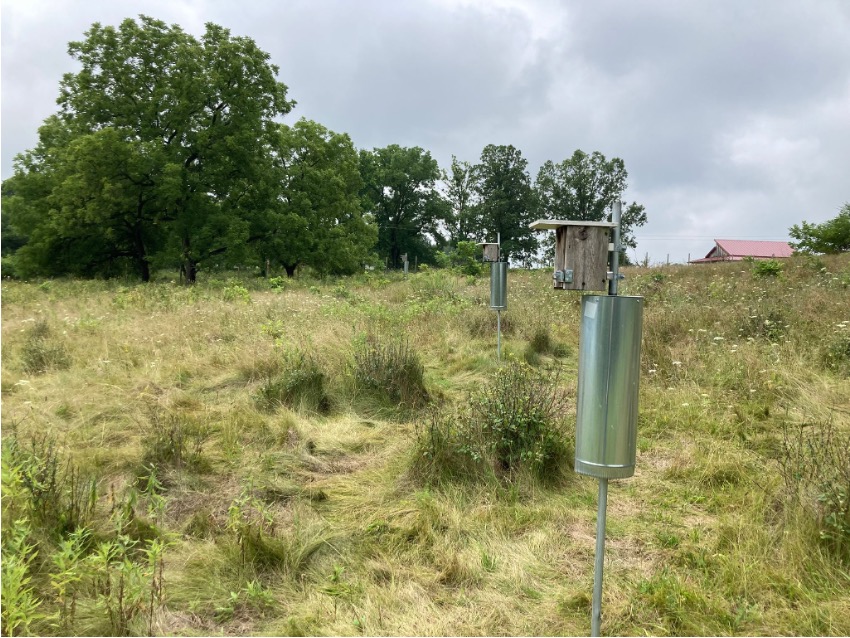 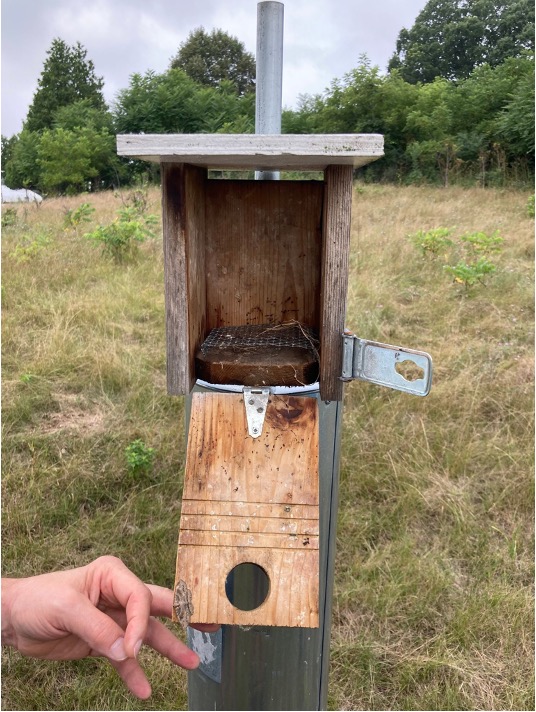 A look inside an unoccupied nest box. Birds will build their nests on top of the wire mesh, which helps keep blowflies and other pests away from the nest.
Photo credit: Derek Smith 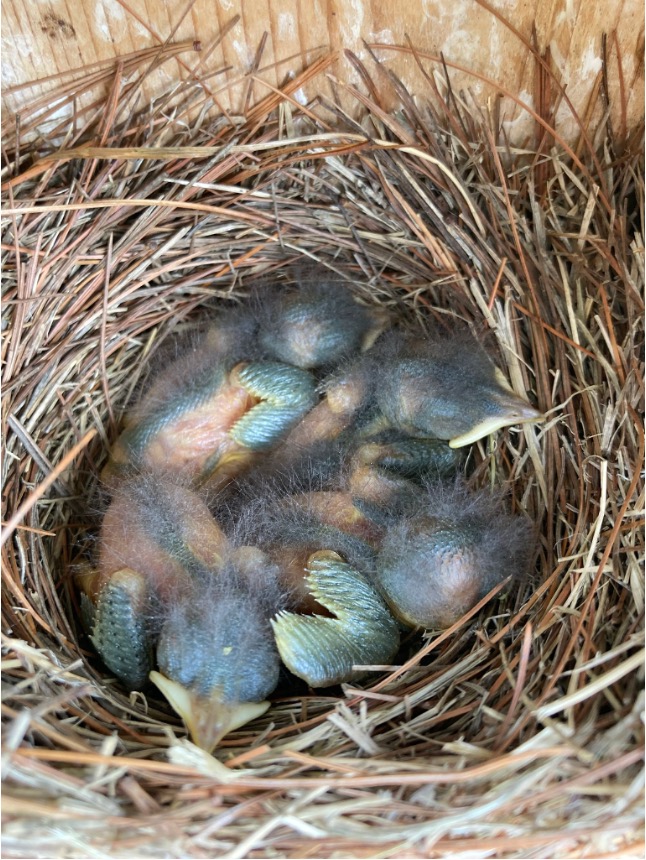