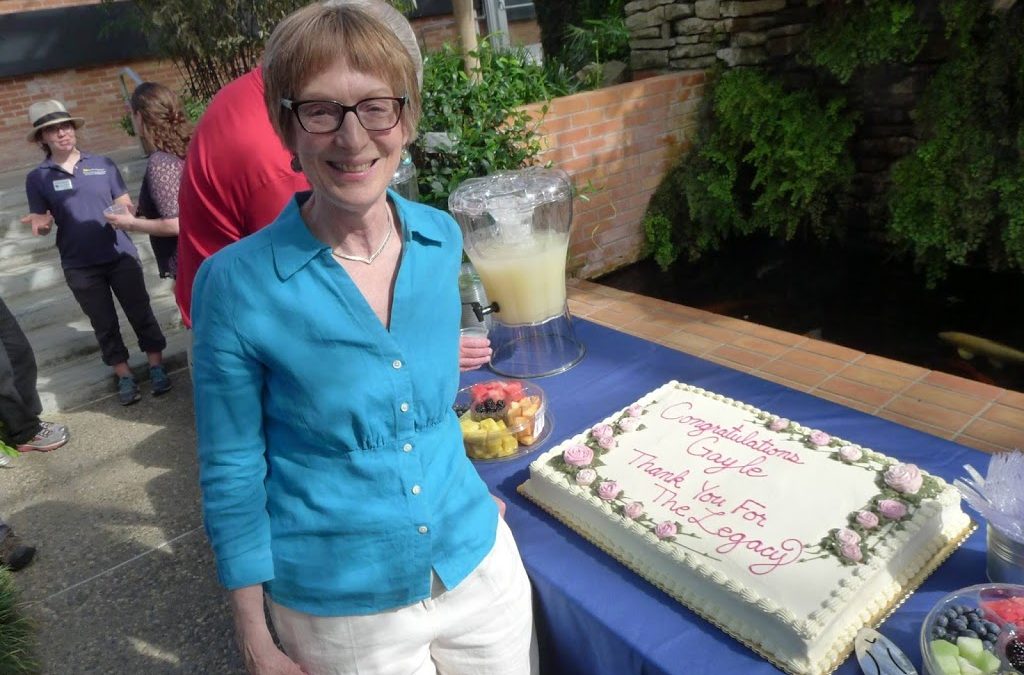 Staff, donors, members, volunteers, and friends gathered April 28, 2017 to honor and celebrate Gayle Steiner. Gayle’s farewell speech was so good we decided to publish it in full here.
Thank you for coming here today, as I retire from one of the best positions at the University of Michigan, as you can see.
What you can’t see is how this ties in to my childhood. When I was little, television shows included the Lone Ranger and Gunsmoke and Rawhide. One of my favorite things was galloping around in my cowgirl outfit. Well…in my first year at Matthaei Botanical Gardens, on my birthday, in March, the gate to the Display Gardens was accidentally left open, and a herd of hungry deer came in for a feast. You can’t have deer eating your collections, so the staff– including me — went outside to find the deer and herd them out. My childhood fantasy — head ’em up and move ’em out — fulfilled!
One more pivotal memory comes from the first plant sale that I attended.  For those of you who don’t know about those extravaganzas, think of a gigantic three-ring circus — for plants.  Bob Grese was introducing me around, and I met Tom Gaffield, as in the Gaffield Children’s Garden. Tom said something that has always stayed with me. He said, “When I’m working in my garden, nothing worries me, nothing bothers me.”  I came to realize that it’s no coincidence that in the English language, when we’re describing people who are pretty together, we say: they’re grounded, they’re down to earth. And those are the people — you — that I’ve been lucky enough to work with.
We’ve been partners in a creation story: creation of the Great Lakes Gardens, creation of the bonsai garden, and now, creation-in-progress of the hiking-biking trail running from here two miles south to Geddes Road and and to other trails that connect us, at last, to central campus and beyond…The peony garden in Nichols Arboretum– the peonies are so voluptuous they’re almost embarrassing.  But it’s not just that–they open a window into the culture of the early to mid 1900s, and now they’re even the focus of international genetic research, which is fitting, given that the man who gave us 280 varieties of peonies was W.E. Upjohn, who earned a medical degree from U of M, founded the Upjohn Pharmaceutical Company, and was a founder of the American Peony Society. He said, “Of the human joys, the joy of beauty is the one most universally demanded and gives the most universal satisfaction.” 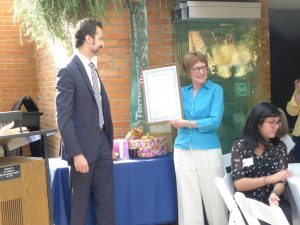