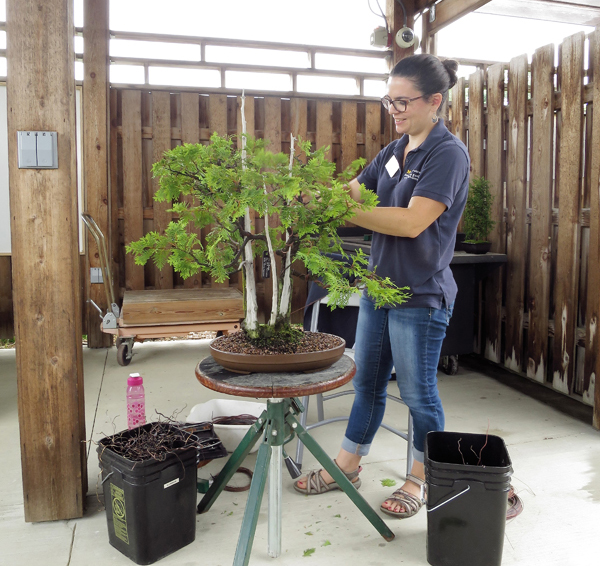 Everyone at Matthaei-Nichols got a little teary-eyed recently as we bid goodbye—alas via Zoom—to Carmen Leskoviansky, our bonsai collections specialist. It’s not a permanent leave-taking, however. Carmen is moving to Portland for a three-year apprenticeship with Michael Hagedorn of Crataegus Bonsai. She’s keeping a 10% appointment with the arb and gardens and at the end of her apprenticeship she’ll return to Matthaei.

(Pictured: Carmen Leskoviansky works on a bonsai during a recent annual bonsai show at Matthaei. The shows are sponsored by the Ann Arbor Bonsai Society.)

As one of very few women apprenticed at this level, Carmen will have a curatorial perspective that’s unique to the University of Michigan. Overall this experience will elevate our bonsai and penjing collection to an international level. This specialized knowledge will be critical to the future of our bonsai collection, especially the trees coming to us from donor, collector, and University of Michigan alum Melvyn Goldstein.

In the Beginning
Carmen began working at Matthaei Botanical Gardens & Nichols Arboretum in 2009 as a temporary employee helping to renovate the peony garden. She worked closely with Curator David Michener to inventory and review the collection, among other tasks. After becoming a permanent employee in 2011 Carmen found herself minding many of the collections—orchids, peonies, bonsai, and bromeliads.

After she and her husband had their son in 2013 she came back-part time, with bonsai as her sole responsibility. “As I worked my way back up to full-time,” Carmen recalls, “we were in discussions with Dr. Melvyn Goldstein about accepting his trees into our collection.” In order to care for such high-quality bonsai, she would need some professional training.

A Focus on Bonsai
In 2018 Carmen began a seasonal bonsai program with Michael Hagedorn in Portland. The program involves study for a minimum number of days and times per year for a certain number of years.

This is where her interest in bonsai really peaked. “Michael’s courses confirmed a lot of what I already knew, clarified information I had been uncertain about, and taught traditional techniques that Michael learned from his teacher, Mr. Suzuki, in Japan,” Carmen says.

The learning took place within a small cohort of students that allowed everyone to expand their skills and improve their techniques. “It was really validating!” Carmen says. “I left every session feeling inspired, wanting to learn more and create beautiful stories with trees.”

During year two of the seasonal program Carmen was introduced to Michael Hagedorn’s new apprentice. “I never thought I would be able to apprentice. My family keeps me pretty busy! Most apprentices are younger and have more time and flexibility.” Michael’s apprentice, John, also has a family and was able to make it work. 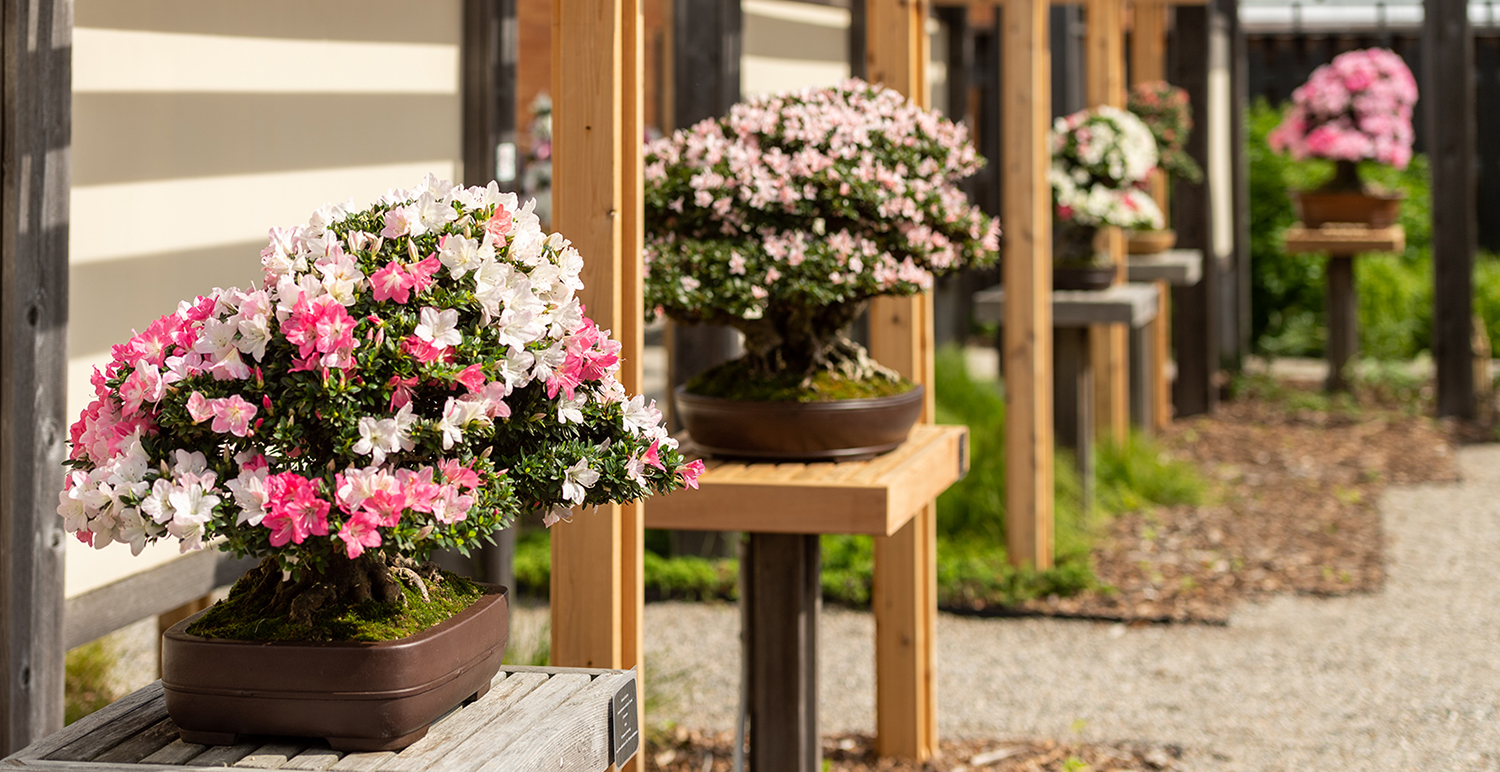 Pictured: Some of the Satsuki azalea bonsai from Melvyn Goldstein’s collection. Dr. Goldstein has provided Matthaei-Nichols with trees for a special Satsuki azalea exhibit held each June at the botanical gardens.

The Special Appeal of Bonsai
At Matthaei-Nichols, we often refer to our organization as a “living museum.” Our collections and properties are filled with objects that are always changing. Plants grow, live, and die. Like all museums, our objects tell stories. Integral to all living things is the story of how they change over time. Every bonsai tree has a story to tell, and for Carmen that’s her favorite part of the bonsai journey.

“Bonsai display is complex and an art form in its own right,” Carmen explains. “The tree is one piece of that. Finding the right elements to create an impactful display that elicits feelings within the viewer is challenging and satisfying. Seeing a well done display is moving and inspiring.”

One way to display bonsai is as standalone pieces. Carmen hopes that in the future we can have a space to create bonsai displays that include elements such as stands, accent plants or figures, scrolls, and other objects. This would help tell a more complete story. “The possibilities for cultural learning opportunities are truly endless,” she notes.

If she had to pick a favorite bonsai style it would be the slender, graceful deciduous trees that have a more feminine feel to them. “Yes even bonsai are gendered!” Carmen says.

She’s still not seeing see a lot of trees like this in the U.S. because it “seems like we are either still in a bigger-is-better phase where folks prefer big trunks, or the more gentle trees aren’t shown because they may seem less impressive.” And yet for Carmen these trees are more relatable to her experience of growing up with deciduous woods and open, airy trees. “I hope to see more of those feminine trees displayed as bonsai progresses in the United States.”

Bringing Women into the Bonsai World
Bonsai is an art and practice still not well-represented by women. Carmen wants to help change that. “I can count on one hand the number of women bonsai curators and professionals. The reasons for this are still being explored.”

“I do hope to have a role in changing this. I am already one of the very few women who manages a public bonsai collection. I hope the women and girls who come through the bonsai garden see that yes, women do bonsai, too,” says Carmen.

“I’ll be Michael Hagedorn’s first woman apprentice, and probably one of the only female apprentices in the United States. It’s a daunting idea to be one of the only women in the public eye, but it’s also exciting to consider how I may affect this cultural shift!”

After her apprenticeship ends, Carmen plans to return to Michigan and continue working with the bonsai collection at Matthaei-Nichols, in particular the Satsuki azalea and bonsai collection of Melvyn Goldstein.

“It’s been a major privilege to work on Mel’s trees, and I hope to continue that. His Satsuki are some of the best, if not the best azaleas in the U.S.” Carmen also adds that there are so many ways that bonsai can be incorporated into academics and research. “I would love to help catalyze those connections with the University,” she says.

While Carmen is studying in Portland, renowned bonsai expert and artist Jack Sustic will be stewarding the Matthaei-Nichols collection. In 2002 Jack was appointed curator of the National Bonsai & Penjing Museum at the U.S. National Arboretum in Washington, D.C. He retired from that position in 2016. Jack has trained with bonsai masters in both the United States and Japan.

We’ll be featuring a story about Jack soon. Stay tuned as our bonsai story evolves!