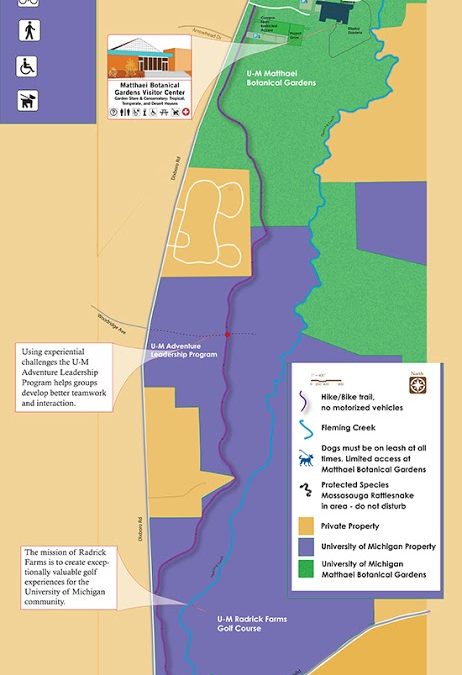 A paved trail will soon connect Matthaei Botanical Gardens to the Washtenaw County Border-to-Border Trail system and beyond. Karen Sikkenga, Associate Director of Matthaei Botanical Gardens & Nichols Arboretum, tells the story of how the trail moved from dream to reality.
At last, it’s really happening, that gorgeous hiking-biking trail paralleling Dixboro Road and providing a safe and beautiful non-motorized connection between Matthaei Botanical Gardens and the UM campus, downtown Ypsilanti, Gallup Park and – almost – the Arb!
I confess, there have been many moments over the past four years when I doubted we’d pull it off, even though the project is a top priority for us and for Washtenaw County, enjoying widespread support from organizations and individuals throughout the area.  Here’s the story of how the trail went from an idea to a reality, thanks to the collaboration, dedication and support of many key individuals and organizations.

I’m an avid bike rider. For almost a decade, I’ve ridden to the Gardens along the riverside trail in Gallup Park, scared to death for the last two miles along Dixboro Road for the sake of those glorious Huron River views. Trusting – hoping – I wouldn’t end up a statistic.

Then, in the summer of 2013, Dixboro Road closed for resurfacing. I started detouring down Radrick Golf Course’s long, pastoral driveway, tiptoeing my bike across the fairway to Matthaei Botanical Garden’s two-track and hoping no one on our staff or theirs would catch the Associate Director with a bicycle at the eleventh hole. It was a long sight safer – and more beautiful – than harrowing, shoulderless Dixboro Road.
And I thought, wouldn’t it be great if we could turn this route into an official bike path?

I had just wrapped up another project and was looking for something to sink my teeth into, something that would add value to our organization and help us accomplish our strategic planning goals. I approached our director, Bob Grese, to ask for his thoughts on whether the Dixboro Trail would be a good use of my time. Bob threw his support behind the idea.
The idea wasn’t new. Dixboro Road between Geddes and Plymouth, once a sleepy rural area, has gotten progressively busier over the past two or three decades. More businesses and housing developments have been built here, and more people are using our stretch of road to flow from north to south. An old road with no shoulders and long stretches with no Road Commission right-of-way, Dixboro Road has a pressing need for a sidewalk – one of society’s oldest and most basic forms of public infrastructure – but no place to put it. A project of this nature is very complex, requiring collaboration from the community, neighboring organizations and all levels of government. In this case, the University of Michigan is more than just a neighboring organization: UM owns much of the less developed land along Dixboro Road, making UM a key stakeholder. Bob shared with me that a Dixboro Road trail project had been fully funded and designed prior to 2005, but did not move forward because the necessary parties could not come to agreement on the details. He warned that it would be a long and complex journey, one that might never arrive at its destination. But if I wanted to try, he would support me.

I had recently begun meeting with my fellow University land managers to increase our collaboration and effectiveness. The Adventure Leadership Program (then known as the Challenge Program), Radrick Golf Course and Matthaei Botanical Gardens all occupy land originally donated by Frederick Matthaei Senior to the University of Michigan, beginning to the north of the botanical gardens entrance all the way to Geddes Road. If the three of us agreed that a hiking-biking trail was a good thing, then land acquisition for most of the trail length would not be an issue; the University would be the only land owner. For Matthaei-Nichols, non-motorized and public transportation options had already been identified in our strategic plan as a top priority for bringing more students, faculty and community members to our facility. Adventure Leadership (John Swerdlow) and Radrick Golf Course (Paul Scott) had not specifically identified transportation as a top priority, but the two managers felt that with their emphasis on sports and wellness, student and community engagement, a trail would be an appropriate use of their properties. As long as I did the work, they were willing – even eager – to allow the land under their management to be used for this purpose, if we could get permission from above.

The next step was to engage higher-level leadership at the University, starting with the Campus Planner, Sue Gott. Sue arranged a plenary meeting of University stakeholders from Athletics (Golf Course manager), Student Life (Adventure Leadership), Department of Public Safety and Security, Government Relations, the Office of General Counsel, Provost’s Office, Architecture and Engineering, Parking and Transportation, Real Estate and more. The group considered all the possible ramifications of a hiking-biking trail – a trail that would be used not just by the University community but by the broader community as well. Who would maintain it? Who would patrol it? Who would respond if trail users needed help? What would be the impact on parking? What if a future competing purpose for the land arises? Would the trail make it easier for trespassers to get into delicate environmental research areas? Despite the risks, the stakeholders agreed that the benefits were clear and the risks manageable. I had the go-ahead to begin looking for funding.
Then came the first big hurdle. Virtually all the funding sources for this significant public infrastructure project were available only to local government entities, not to universities. I found three great possibilities for Federal, state and local grants, but Matthaei-Nichols was unable to apply for any of them. I needed a local government partner.
Enter Mike Moran, the elected Supervisor of Ann Arbor Township. Matthaei Botanical Gardens is located within both Ann Arbor Township and Superior Township, but the proposed trail route was contained entirely within Ann Arbor Township. I cold-called Mike and explained my big idea over the phone – I’d do all the work, and Ann Arbor Township would sign on the dotted line and hit the “submit” button. I wonder now if he thought I was crazy. He didn’t say so at the time, but he did tell me that the AAT Board of Trustees needed to approve all grant applications, and that at least one member of the board lived in a condominium adjacent to the trail route, and that she – like a lot of Laurel Gardens neighbors – might or might not take kindly to the idea of bicyclists whizzing past their previously bucolic back doors. My response? “Well, they should!”
He put me in touch with his board member, allowing me to make my argument directly to her. The argument? Undeveloped land is always waiting to be developed, right up until the plan is made and implemented. A hiking-biking trail would create a relatively benign plan and use, reducing the likelihood of a less desirable development in the future. I guess my argument won the day, because the next thing I knew, Jim Kosteva (the University’s Government Relations liaison), Sue Gott and I were presenting the project proposal at an Ann Arbor Township public meeting. The Board fully supported the project and continues to do so. We were off and running.
That was in October of 2013, and the grant source was the Washtenaw County Recreation and Parks Department. I believe I told the Township board that I hoped trail construction would begin in the spring of 2014.
Who would have believed then that the project would take four years to bring to fruition? Since 2013, we’ve had many hiccups. Sometimes, the barriers seemed insurmountable. The project has evolved into a three-party endeavor with the Washtenaw County Road Commission, Ann Arbor Township and the University of Michigan as the parties, an arrangement that requires consistent communication and deep collaboration. Budgets have gone up and down. University leadership has changed. Gifts have fallen through. Deadlines have changed. But each time a barrier seems insurmountable, one or more of a very large team of dedicated, creative, generous and competent partners have found a way to jump the barrier and move onto the next challenge.
I hesitate to call out individual names because of the risk of leaving out one of the many dedicated partners, but a core group of very dedicated partners deserve special recognition for the success of the project. These are Mike Moran of Ann Arbor Township, Matthaei-Nichols passionate development director Gayle Steiner, Matt MacDonnell of the Washtenaw County Road Commission, Frances Mueller of the University of Michigan’s Provost Office, and Bob Grese.
The broader circle of supportive stakeholders includes our corporate neighbors Toyota and NSF as well as almost 150 individual donors, including the Matthaei sisters and Pam Braden in honor of Fred Matthaei Junior and Fred Matthaei III. University administrators (especially from the Office of University Development and A&E), County and Township employees and contractors, the Ann Arbor Township board, the Washtenaw County Parks and Recreation Department, advocates from the Southeastern Michigan Council of Governments (especially WCC Trustee Diana McKnight-Morton), and many, many more dedicated individuals have contributed to the success of the project.
To all of you, thank you.