Invasive of the Week: Japanese Knotweed

Japanese knotweed, Fallopia japonica (also named Polygonum cuspidatum) and nicknamed Japanese bamboo and fleeceflower, is listed as a prohibited species in Michigan. Native to Japan and used in traditional medicine, it has contemporary herbal use as it contains the antioxidant trans-resveratrol: similar to the compound found in red grapes, but more readily absorbed and utilized. Introduced as an ornamental plant, Japanese knotweed is devastatingly invasive, because it is allelopathic and spreads rapidly, aggressively forcing out other species and creating decimated monocultures.

The Global Invasive Species Database lists Japanese knotweed on its “100 of the World’s Worst Invasive Alien Species” list. In the United Kingdom, sellers have to disclose the presence of Japanese knotweed on deeds. Banks require a written management plan if it is present on or nearby property–and will not underwrite a mortgage without one. Researchers determined that the UK infestation derived from one single plant.

Japanese knotweed is a perennial herbaceous shrub which can grow from 3-10 feet tall (often taller than other woody shrubs–helpful to ID it); though its mottled, upright stems die back, hollow stalks remain in winter, looking like bamboo (see image 2 below). Leaves are simple, alternate, oval, wide, up to 6” long and 5” wide, with a flat base and pointed tip. Creamy white, numerous flower spikes cluster on stalks ends in August-September in Michigan; fruits are three-winged with dark glossy seeds (see image 4 below). Its inherent danger as an invasive species derives from the extensive root system of globulous rhizomes which store up to two-thirds of a mature plant’s mass. Rhizomes can grow to 3 inches in diameter (!), reach seven feet deep in some soils, and extend up to 70 feet. Older infestations have massive root systems.

Found in wetlands, riverbanks, and uplands, knotweed prefers sun but can grow in shade and a range of soil conditions. It thrives in disturbed natural areas or sites such as roadsides (see image 3 below) or construction areas. Powerful roots can infiltrate asphalt and cracks in concrete, and lead to erosion along stream banks. 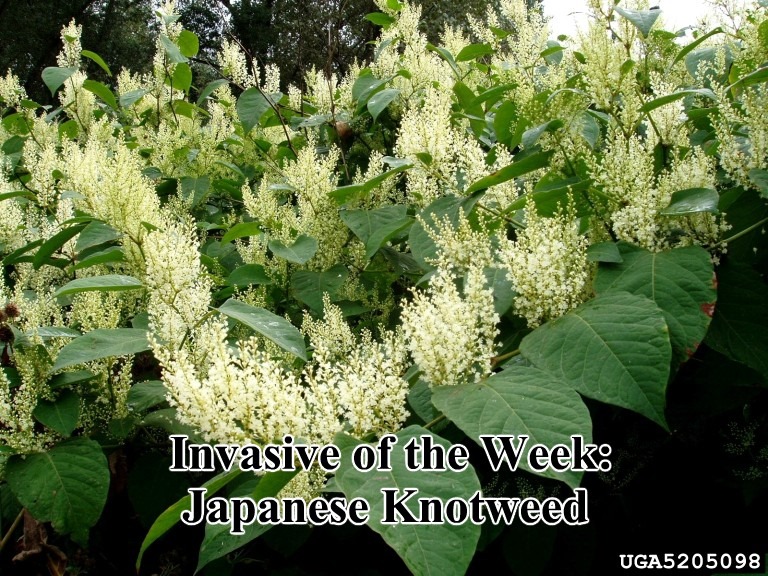 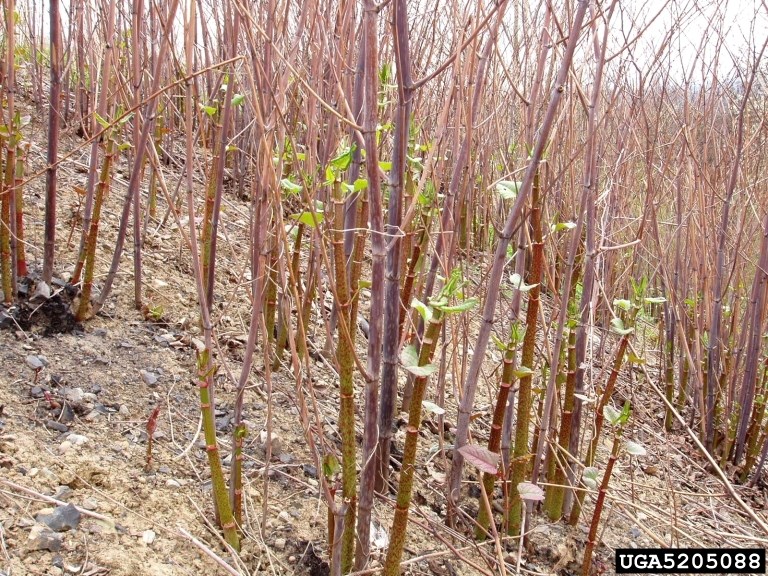 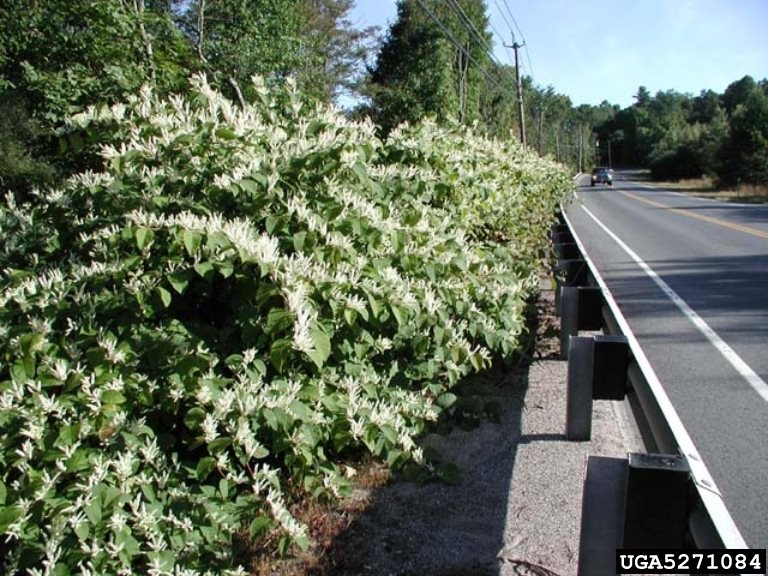 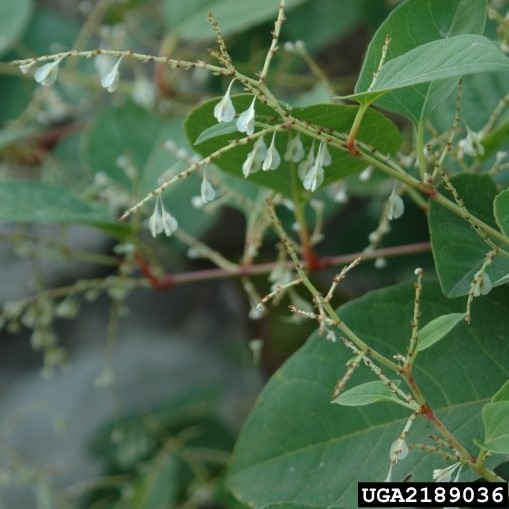 Reproducing vegetatively by rhizomes, even the smallest of cut root and stem fragments can resprout with a vengeance–including those up to a meter deep. Along riverbanks, small root pieces spread rampantly through water and after rainy-season floods. In Michigan, roadside mowing equipment has inadvertently spread cut parts and spurred growth, and has also spread unintentionally through movement of contaminated construction site fill. It can develop fertile hybrids with similar giant knotweed (Polygonum sachalininese) and some of these hybrid US populations produce copious quantities of viable seeds.

Control methods: Work focuses on a combination of mechanical and chemical control paired with vigilance and follow up for 5-10 years: like the undead, rhizomes not completely eradicated can grow shoots up to three years later! Several strategies include applying herbicide to foliage early in the season with repeat efforts later after cutting it back, and herbicide injections–time and labor intensive. It’s imperative to take into consideration the nearby plants and water features when planning control and determining appropriate targeted herbicide use. Excavating the plants’ intertwined, elaborate root system is important–and incredibly difficult. All cut or dug parts must be removed and disposed of in the trash. (Some sites even say not to leave small pulled plants near soil.) The knotweed aphid, Aphalara itadori, may be useful as a biological control, though research in the UK showed mixed results when anthocorids (minute pirate bugs or flower bugs) consumed the aphid eggs.