Invasive of the Week: Garden Valerian

After some initial research, valerian might seem like a friendly herbal plant with an extensive history of traditional medicinal uses. And it is. And sometimes, it’s not. It’s all about location: when a plant roots outside of its native environment (where natural pests balance it) and forces out native species, or degrades the soil or ecosystem in other ways, it becomes invasive.

The U.S. Forest Service defines an invasive plant species as “alien to the ecosystem under consideration and whose introduction causes or is likely to cause economic or environmental harm or harm to human health.” In the wrong place, garden valerian can develop dense infestations which crowd out native species and negatively impact habitat for wildlife. 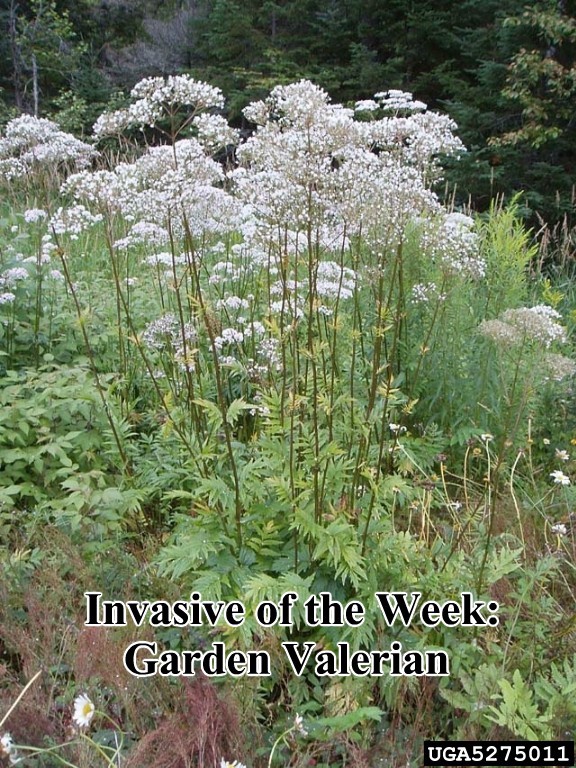 Valeriana officinalis, also known as garden valerian, common valerian, or garden heliotrope, is an upright herbaceous perennial growing from 1-4 feet tall. Native to temperate areas of Europe and Asia, it’s adaptable in a range of habitats including wooded areas, wetlands, grasslands, and disturbed areas like roadsides.

Amenable to wet and dry conditions, it’s invasive in and around some coastal areas. The USDA Early Detection & Distribution map for common valerian shows clusters around the Great Lakes and throughout much of the Northeast. Escaped from controlled environments into isolated appearances, valerian has spread more rapidly into other natural areas. It is now banned in Connecticut, listed as invasive in Illinois, and is problematic in other states. At Matthaei, it has intruded in the Great Lakes Garden, and along a wetland perimeter. 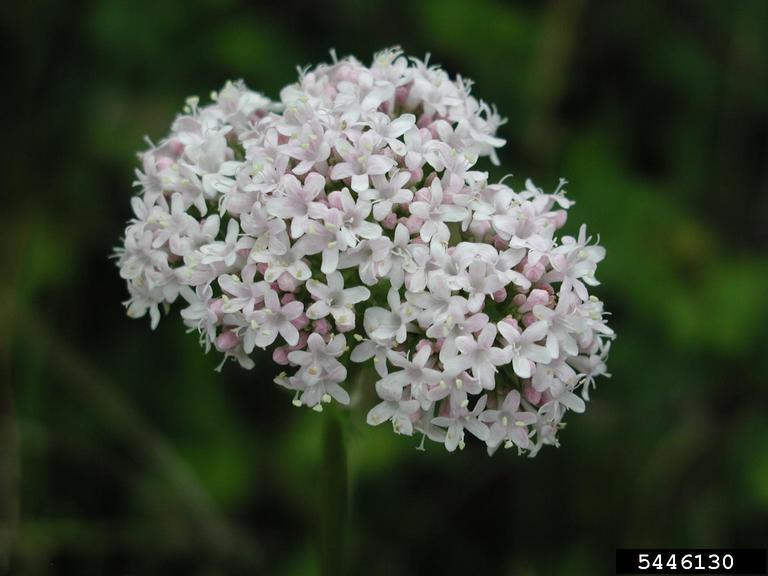 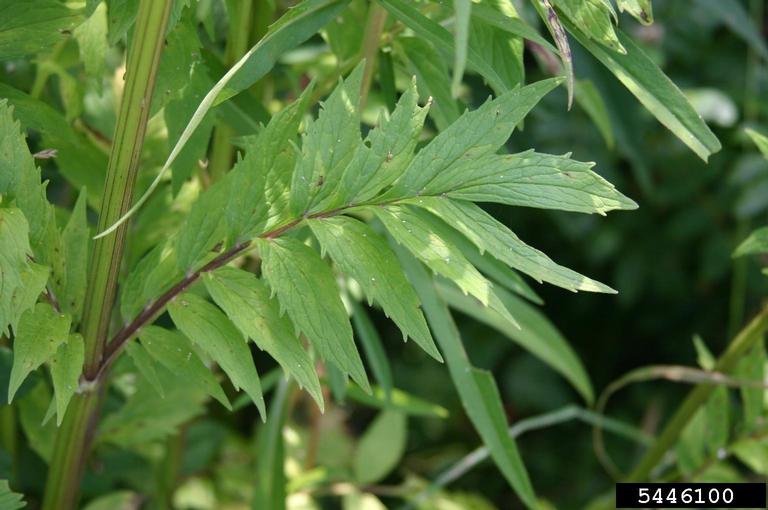 Fragrant white or pale pink funnel-shaped, 5-petaled flower clusters bloom June-August. Leaves are opposite, pinnately compound with 11-21 lanceolate (lance-shaped) leaflets with toothed (dentate) edges and some hairs on the underside. Stems are thick and hairy, in particular where the leaves meet the stems (the nodes). 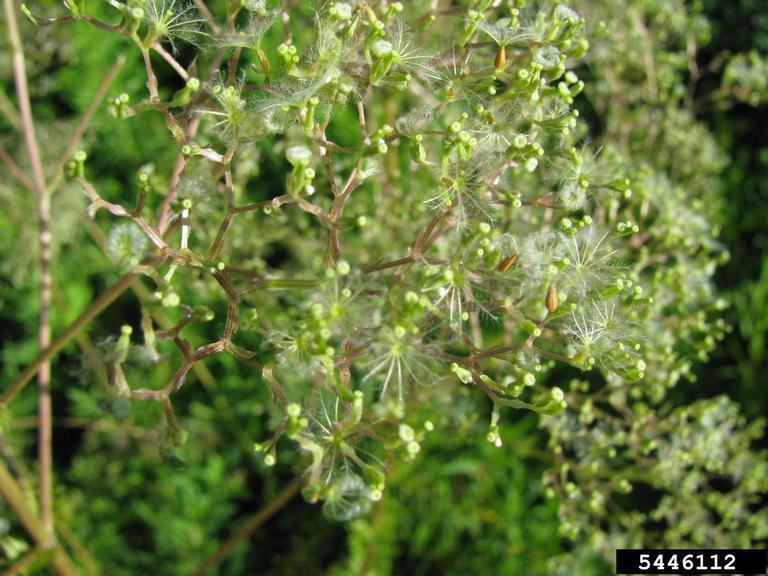 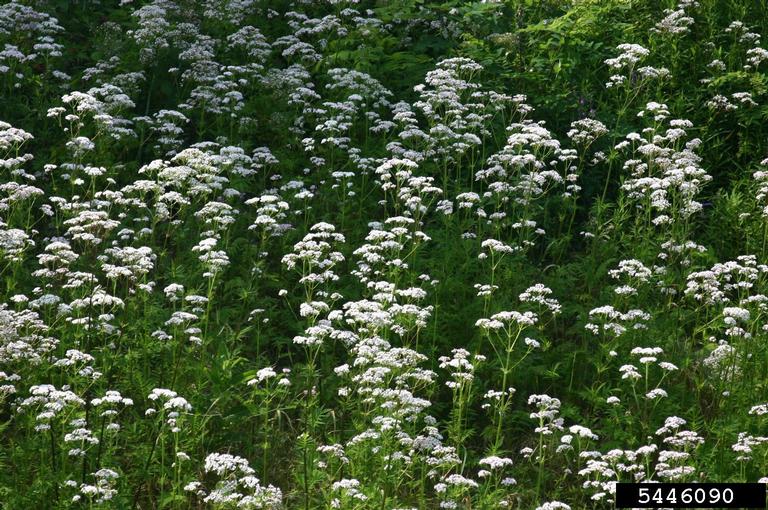 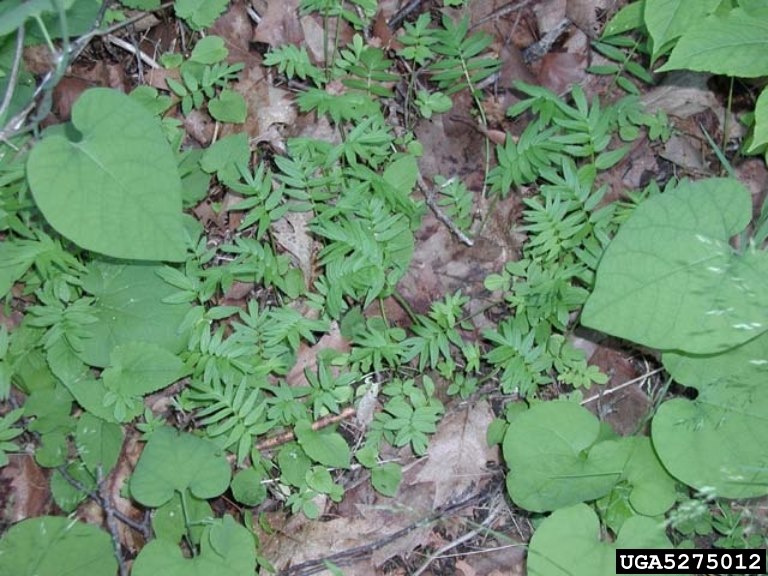 In the top 10 of herbal remedy uses in the United States, garden valerian was utilized by Native Americans. Current uses include in essential oils, as a flavoring, and as a desirable ornamental garden plant. Employed as a sedative to help reduce anxiety and sleep disorders, it was utilized in WWI and WWII for calming troops affected by shell shock, while also soothing civilians unnerved by air raids. Cats love valerian, too, and it’s as intriguing to them as catnip.

But what’s the down side? Garden valerian reproduces vegetatively, and through copious, small powdery seeds that spread readily on the wind, leading to tightly-packed infestations. A staff member’s story illustrates its tenacity: “I planted it once and regretted it. Took 3 years to remove all the plants and seedlings.” In the Upper Peninsula of Michigan in Ontonagon County, the Forest Service has asked residents to not plant garden valerian, to keep it contained in herb gardens, and to remove seed heads after flowering and before seeds disperse. Its reach is especially concerning if it spreads to areas of more focused conservation work, such as wetlands. Though seemingly short-lived in the seed bank (<2 years), valerian’s aggressive rhizomatous behavior is central to its invasive persistence.

For control methods, hand-pulling is ideal for small areas since valerian comes up readily, though the stem may break off. Mowing may be used for larger areas before flowering or before it sets seed. After seed set, mowing can actually lead to greater infestations through seed dispersal. For larger stands, late spring burning is suitable for fire-adapted communities; herbicide use is a possibility when circumstances warrant. In all cases, repeat monitoring of sites is necessary.

About the author: In a normal year, Katie Stannard would be coordinating and onboarding the summer interns at Matthaei-Nichols and helping the visitor engagement team run the visitor center at Matthaei. This year—along with a months-long closure and absent student interns—Katie’s been helping out in a big way with our social media and with blog posts, including this series about staff happenings behind the scenes during these extraordinary times.

Katie received her Master Gardener certification in 1999, and has years of experience with heirloom flower bulbs and small business operations. She is passionate about encouraging kids of all ages to “go outside!” and explore the natural world. Her current gardening interests include children’s gardens, native plants, and everlasting yet nonintrusive perennials. Katie volunteers for her kids’ school, for Carleton College as an alumni volunteer, and in her neighborhood to organize community events. She holds an M.A. from Carnegie Mellon University in literary and cultural theory, and a B.A. from Carleton College in English.