Invasive of the Week: Black Swallow-wort

Black swallow-wort, Cynanchum louiseae, also known as dog-strangling vine is a perennial vine with attractive deep black-purple flowers and dark green, shiny leaves that aggressively entwine readily to itself and adjacent plants–hence the reference to “strangling.” Native to southeastern and northern Europe and introduced as an ornamental, black swallow-wort was first noted in the mid-1860s near Boston as an escape from garden collections where it had become weedy. Because it is allelopathic (produces biochemicals that impair nearby plants), happy in shade or sun, and incredibly fast-growing, it can choke out native species, creating a nutrient-depleted monoculture and impacting biodiversity for insects and birds.

Black swallow-wort can be found in a range of areas including disturbed sites, hardwood forests, field edges and roadsides, growing up to 7 feet tall. In some parts of the country, it is invading watersheds. As it also grows in alvar–a limestone plain with little to no soil which supports species of prairie plants–it has encroached alvar in New York State, forcing out rare native species.

Identifying characteristics include clear sap, and opposite leaves on vining stems which encircle themselves and other plants, or along the ground for support as it can’t stand on its own. Walking through a heavily infested area can be difficult because of densely tangled vines.

Leaf form is simple, oval to heart-shaped with a pointed tip, 2-5 inches long and 1-2 inches wide. When broken, leaves have a distinct herbal smell. Flowers appear June-August, are small and star-shaped with five petals. (The similarly invasive pale swallow-wort has pink to maroon flowers with lighter green leaves.) Generally 6-10 flowers cluster on leaf axils, the angle between the upward-facing leaf and the branch where the leaf joins the stem. Seed pods look and act like milkweed pods encasing brown, flat seeds covered in white hairs which assist in wind dispersal. It also turns noticeably yellow in the fall, so can be readily identified from other more desirable plants. 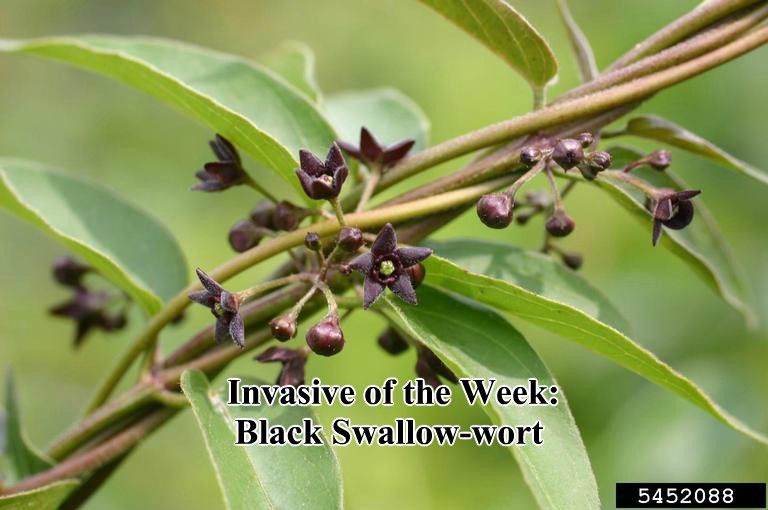 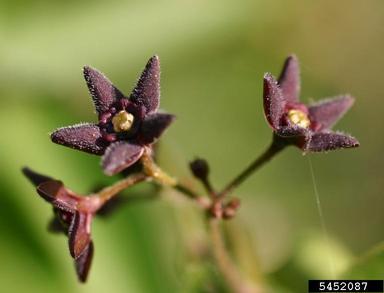 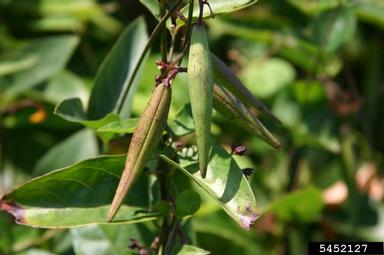 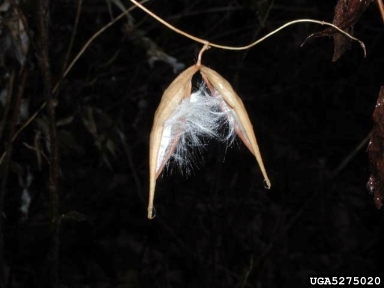 Black swallow-wort reproduces primarily by seed, and propagates vegetatively by rhizomes and plant shoots from the root crown of the parent plant. Roots are toxic to mammals. Distasteful to some insect larvae, it’s toxic to others, notably monarch larvae. There’s some dissension in the literature about how often monarch butterflies lay eggs on swallow-worts, mistaking them for milkweed, but when this does occur, the emerging caterpillars die. Black swallow-wort can also simply out compete native milkweeds, thereby reducing this food source for monarch caterpillar larvae. Its allelopathic tendencies can negatively impact root growth in butterfly milkweed and shoot growth in common milkweed.

Control methods include digging to remove all of the roots and the full root crown to eliminate resprouting. Some sites recommend mowing as a temporary step in control, though timing is everything: it needs to occur when seed pods begin, but haven’t yet produced viable seeds. If the entire plant is not removed, then mowing will lead to extensive offshoots from the root crown the following year. Prescribed burns assist in seed germination, though can impact small plants with limited roots. Seed pods and roots should be removed and disposed of. For extensive infestations, mowing before seedpods appear then herbicide application to foliage or cut stems can be utilized. Because of the waxy cuticle found on black swallow-wort, listed herbicides such as Triclopyr require an adjuvant (additive) such as vegetable oil to aid in permeating the foliage. As with other invasive species, repeat monitoring for several years is crucial for eliminating new sprouts.