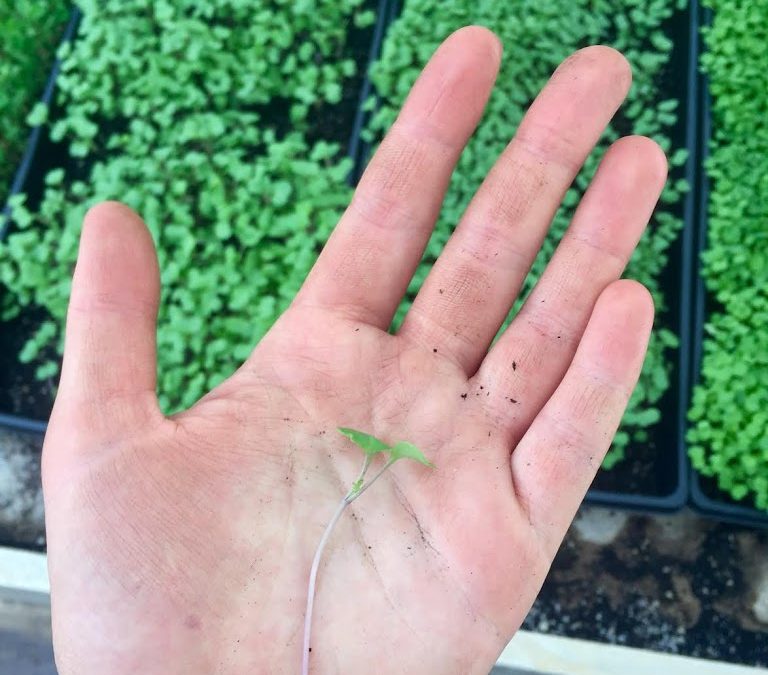 Intern Haley Kerner discovers the culinary, nutritional, and microcosmic virtues of microgreens.
By Haley Kerner
One of the things I have been learning about while working as a Campus Farm student intern is how to grow microgreens. I didn’t have much experience with growing microgreens before my internship, so I’ve really enjoyed learning more about them.
Microgreens are young vegetable shoots harvested shortly after sprouting. The leaves on a microgreen are called the cotyledon leaves, which are the first leaves on the plant and the ones that store the nutrients from the seed and typically wither and fall off the plant when spent.
The process of growing microgreens is relatively simple. They are typically grown in flats and can be harvested around 10-14 days after planting. And growing year-round is not a problem with microgreens because they are easily sprouted indoors when the outdoor temperatures drop. The Campus Farm grows its microgreens in greenhouse 5 at Matthaei, along with our transplants. We use the greenhouse for transplants of things that do better outside when they already have a head start. It is also a place where we can still grow things during the winter months. The greenhouse space—as well as the new hoop house at the farm—has been a great way for more students to engage with the farm because many of them aren’t around Ann Arbor during the summer and don’t have the chance to see the Campus Farm at its peak.
We grow three different types of microgreens at the farm: red arrow radish, red Russian kale, and arugula. The radish and arugula microgreens, like their mature counterparts, are pretty spicy and add a great zing to food. Red Russian kale micros taste sweeter and are not as spicy. Added to nearly any meal, microgreens pack a tasty zest and crunch.
Although small in size, microgreens bring a heightened nutritional value to the plate. According to a study done on the nutritional value of microgreens, researchers found that the cotyledon leaves from almost all of the microgreens under study had four to six times more nutrients than the mature leaves of the same plant (Xiao 2012).
And while not technically a microgreen because they are harvested past the point of the cotyledon growth stage, pea shoots are also on the menu at the Campus Farm. Pea shoots are grown in a similar fashion to microgreens, but the seeds are much larger and need to be soaked before planting. If you are like me and can’t get enough of sugar snap peas, then you’ll love pea shoots. They taste very similar to the peas that the shoots would end up producing. I especially love these in sandwiches and wraps. While I might not be quite ready to replace all of my macrogreens with microgreens, a handful of them atop a dish gives me a boost in nutrition and a more flavorful meal!
What’s Up with the Campus Farm
Growing microgreens is a small but tasty part of what we do at the Campus Farm. The microgreens have been served at the Ross Business School Executive Dining Room. Soon we hope to incorporate produce into the student menus through Campus Dining. Jeremy Moghtader, the new farm manager, and Alex Bryan, the U-M Sustainable Food Program manager, have big plans for the farm that involve students, faculty, volunteers, and lots of cross-campus collaboration. Jeremy explained how food impacts all of us on many levels, including human, economic, and environmental health. “How food is grown, who has access to it, and what we eat are profoundly impactful at local, national, and global scales,” he says. A successful U-M Campus Farm, he continues, will help address these issues as a “living, learning laboratory for a diverse and empowered community of students, faculty, and staff working on sustainability in food systems—and a place where the food is grown, prepared, and consumed by students, from our farm to our tables.” 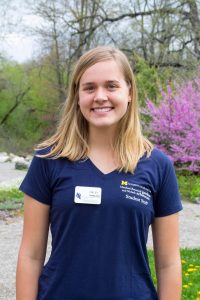 Haley Kerner, from Battle Creek, Michigan (cereal city!), is a rising junior studying Program in the Environment. She is working on the Campus Farm this summer and is excited to learn more about growing food organically. Haley loves running, hiking, and cooking and eating great food with family and friends. Haley’s internship is made possible by funds from the Matthaei-Nichols membership program and individual donors’ gifts to the membership fund.
Source: Xiao 2012: Xiao, Zhenlei, Gene E. Lester, Yaguang Luo, and Qin Wang. “Assessment of Vitamin and Carotenoid Concentrations of Emerging Food Products: Edible Microgreens,” Journal of Agricultural and Food Chemistry 60.31 (2012): 7644-651. Web.