By Connor Kippe
Near the end of the back hallway at Matthaei Botanical Gardens, by the garage-door entry, there exists for staff and volunteers an unassuming piece of furniture called the “free table.” Not long after starting work this summer, in some downtime after lunch (having consumed a meal made with Campus Farm vegetables), several other interns and I stopped by the free table to sort through its contents. Among the assorted plants and donated books I noticed a bin labeled “Cultivating Community.” Inside the bin, along with a few other things, there appeared to be a pile of thank-you cards. Needing some to acknowledge the benefactors who made my internship possible, I reached to grab it. Upon picking it up, however, it fell apart! Or appeared to at least.

To my surprise, it unfolded accordion-style to reveal what must have been someone’s art project in the past. The cards were connected, and pasted on them, descending down the length, were these words: 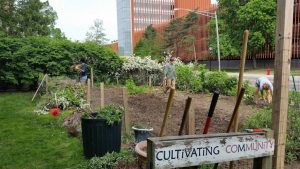 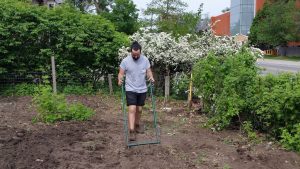 As the Campus Farm grew, however, Cultivating Community began to wither. But not completely. In its place rose a new garden at East Quad student residence hall. The garden was used to grow food for students and even to teach a mini course. With the newfound popularity of a nearby garden, the Campus Farm in collaboration with the larger University of Michigan Sustainable Food Program, decided to bring back the Cultivating Community garden.
Throughout the rest of the summer, a different manager will help out at the Cultivating Community and East Quad campus gardens every week in conjunction with volunteers and a part-time intern. There are plans in the works for the tending of more land as the Campus Farm staff continues to grow. We and our future coworkers look forward to cultivating many things in these gardens such as peppers, kale, squash, and perhaps even a little bit of community. 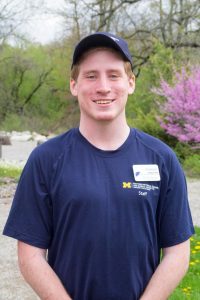 Connor Kippe is a rising junior from Spring Lake, Mich. studying political science and Program in the Environment. He is working as a Campus Farm manager this summer, which ties in with his concentration in food and water policy. Outside of work and school he is devoted to eating fresh produce from the farm, training for endurance events, writing, and reading. Connor’s internship is made possible by the Porter Family Foundation.