Geothermal Energy: What It Is, How It Works

Background on Geothermal Energy
In a recent blog post on hydropower I discussed the potential for Michigan’s Great Lakes to harness hydroelectric power in the search for new forms of renewable energy. This week’s post discusses an entirely different form of renewable energy production: geothermal energy. Because of its specific parameters and requirements, Michigan is actually not a very suitable location for geothermal reservoirs, however there are a few exceptions to this that I’ll note later on.

So what is geothermal energy production? I would say that of all the forms of renewable energy, geothermal is the least discussed. This is likely because it has the most specific requirements in terms of where it can be harnessed, as geothermal reservoirs typically require hot steam reservoirs that many places do not have ready access to. The main function of geothermal energy production is quite simple; these hot steam reservoirs located beneath the Earth’s surface are typically tapped into via wells or drilling, and the hot water is harnessed to create forms of electricity. 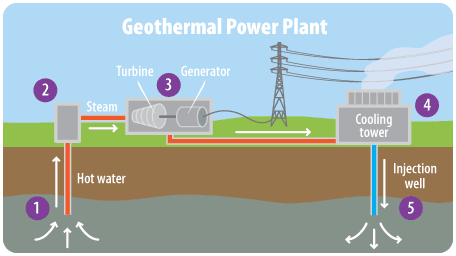 In the image above, the process of geothermal energy production from the scope of a power plant is outlined in 5 simple steps: 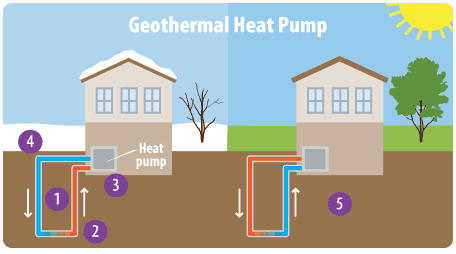 Once again, this process can be outlined through 5 steps:

So why doesn’t everyone do this?
Unfortunately for geothermal enthusiasts, the process cannot be utilized very much around the United States. Because geothermal production methods require an underground reservoir of a constant year-round temperature, this method can’t be used very much in Northern states. However, states like California, Hawaii, and many other Southwestern states present the perfect environment for geothermal reservoirs. It’s also worth noting that these states are also very close to tectonic boundaries and activity, which heavily drives underground reservoir processes (EIA). 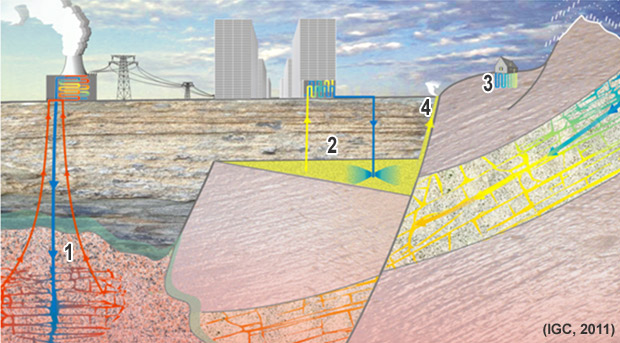 The image above highlights the presence of a geothermal reservoir at a tectonic boundary, and another example of a power plant utilizing this reservoir to produce electricity.

There are also some drawbacks to geothermal production, such as minimal emissions in silica and sulfur dioxide, two noxious chemicals that can have adverse effects on human health. However, despite these minimal emissions, the alternative of continuing to emit tons and tons of carbon into the atmosphere certainly has stronger adverse effects. Additionally, according to Energy Informative, the costs of production of a geothermal power plant of only 1 megawatt capacity ranges from $2-$7 million, which is no small price. But that gives all the more incentive for an individual-based system, where if people who can afford it want to build their own geothermal system, they can. Also, a heavy upfront cost may end up being worth it in the long run, based on the social costs of continuing to emit carbon into the atmosphere.

What about Michigan?
Despite our state’s lack of tectonic activity to drive a plethora of geothermal reservoirs, that doesn’t mean we are entirely without them. In an article for the Energy News Network, Jeff Kart writes that there are multiple communities in Michigan actively seeking to expand their geothermal network despite the difficulties in doing so. He cites a project being worked on in Dearborn Heights, where a man named Ron Amen is trying to convert land next to a senior center into a large geothermal reservoir. The project would end up providing electricity to hundreds of neighboring homes. This is a very interesting project, because it shows that even through high costs and unlikely scenarios, there are still people willing to bear those burdens in order to benefit the environment, which is a mindset that we need in order to fight the climate crisis.

Concluding Remarks
While this is a brief rundown on geothermal energy, I hope you learned something new about renewable energy production, and will be able to share this information in your next interesting climate discussion! Overall, geothermal energy provides a promising alternative to fossil fuel combustion in areas of high tectonic activity, albeit at quite a high upfront cost. But, if we are to stop the imminent climate crisis from causing more destruction than it already has, then maybe what we need is a few powerful people willing to make a sacrifice of a few dollars for a few years, because the payoff would be remarkable.

Nathan LaFramboise is a University of Michigan sophomore majoring in earth & environmental sciences and the Program in the Environment. He loves backpacking, running, hammocking, hacky-sacking, and anything outdoors related.