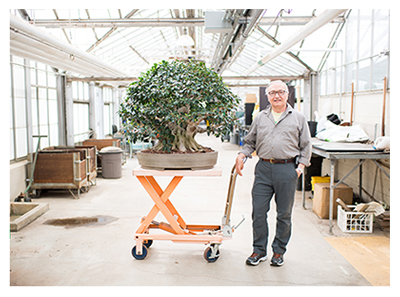 Donors Jerry and Rhona Meislik recently gifted a unique bonsai to Matthaei-Nichols—a magnificent Chinese banyan (Ficus microcarpa). Jerry drove all the way from his home in Montana to deliver the tree to the botanical gardens in late June. The Ficus easily measures 4 feet across and has an enormous trunk. We asked about the tree’s age. As it turns out, determining a bonsai’s age is the horticultural equivalent of the Antiques Roadshow question about value. It’s often exceedingly difficult to determine and based on a lot of unique conditions. According to Jerry the tree first came into his possession in 1999. “It was old when we got it and it had a lot of evidence that many things had been done to it over the years.” he explained. “But I would say it’s north of 60 years.” The Meisliks are donating the tree now because they want to share it with a much larger audience than might get to see it if it stayed at their home. The Ficus is among 30 or so display-worthy trees the Meisliks have in their collection 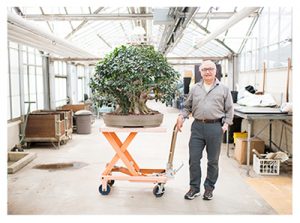 Matthaei-Nichols members since 1988, the Meisliks donated inaugural gits to open the Jerry and Rhona Meislik Bonsai Fund for an endowment to care for the extensive collection of bonsai trees, one of the most time-intensive—and beautiful—living collections at the gardens and arboretum.

We welcome donations to the bonsai garden. Click here to help support the Jerry and Rhona Meislik Bonsai Fund.

(Pictured above: Jerry Meislik stands next to the Ficus microcarpa he recently donated to Matthaei-Nichols.)