Last week, while pulling some weeds, a few members of the MBG team brainstormed an idea for a blog on native Michigan wildlife. This blog would help interns and anyone interested learn about the diversity in Michigan by sending out daily posts, complete with names, fun facts, pictures, and sometimes even a sound bite! Throughout the summer, there would be quizzes to help cement the info in everyone’s brains.
Well, lucky for you, the interns have decided to make this dream a reality! We present to you the Daily Diversity Blog! (dailydiversitymbg.tumblr.com), which will be updated daily. You will also be able to locate weekly versions of the posts on this blog, and we’ll update you each Friday with 5 new species!
We hope you all enjoy this new series! If you have any questions or species suggestions, feel free to contact Jason (jtlafavorite@gmail.com) or Grace (gracpern@umich.edu) for more info! We’d love to hear from you and make this a truly collaborate project!
Here are the species for this week! 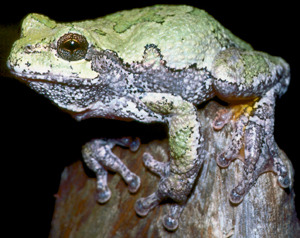 Gray Tree Frog
Scientific name: Hyla versicolor
Anishinabemowin name:  agoozimakaki
What’s that sound? It’s the first species in our Daily Diversity blog! This cute little friend is named the gray tree frog. You can find these guys in trees in the eastern US and southeastern Canada.
Fun Fact: Although mostly gray and green, this frog sports some bright yellow spots under his legs! This will help you remember his name: he is pretty versatile with his colors!
Listen to the gray tree frog’s call here!
For more information, visit this website.

Northern White Cedar, or Arborvitae
Scientific name: Thuja occidentalis
Anishinabemowin name: giizhik
The “Grandmother cedar” (a title of respect given by the Anishinabe) has many interesting uses, and its tea is a great source of Vitamin C!
Fun Fact: The Arborvitae isn’t actually a cedar! Instead it’s a member of the cypress family.
For more info, visit this website!

Bloodroot
Scientific name: Sanguinaria canadensis
Anishinabemowin name: miskojiibik
Bloodroot is a pretty little perennial that grows all over the eastern and midwestern US!
Fun Fact: Sanguinaria, an active chemical found in bloodroot, is used in many commercial mouthwashes and toothpastes because of its bacteria-killing properties! BE CAREFUL, though! The raw juice and roots are poisonous to humans!
For more info, check out this website!

Killdeer
Scientific name: Charadrius vociferus
Anishinabemowin name: miskode`agashkooz
This peculiar plover is pretty large for its kind, weighing in at about 3 ounces. Watch where you step, because the killdeer likes to make its nest in the ground!
Fun Fact: To remember this bird’s name, keep in mind that it has many different types of calls, which makes it a very vociferous bird!
To hear the Killdeer’s call, click here!
For more info, visit this website! Mayapple and Mayapple Rust
Scientific names: Podophyllum peltatum and Allodus podophylli
Anishinabemowin name:  bookade`imin
SPECIAL DOUBLE WHAMMY! This woodland perennial (with a cool secret flower) is not an apple, but it can grow in large colonies that all come from the same root! The mayapple rust is a bright orange fungus that usually affects mayapple leaves in the summer.
Fun Fact: Mayapple can be used to treat warts! It’s currently also being researched on it’s ability to fight cancer.
For more info on mayapple, visit this website!
For info on mayapple rust, check out this page!
Have a great week!