Have you ever noticed that some of the trees and plants in Nichols Arboretum have labels that tell you their scientific name, common name, and continent of origin? I have always found that so useful. I’m always wondering what species of tree I’m looking at and what the key differences are, for example, between the different kinds of oaks.

But what about the ones that aren’t labeled? Wouldn’t it be nice if you could just walk around the Arb and know exactly what species of tree you were looking at? Well, now we have even more plants identified and a way to easily access them on your phone.

For my intern project this summer I have been working on creating geographic information systems (GIS) records of woody plants in the Arb. I am collecting global positioning system (GPS) coordinates of where plant specimens are in the Arb, and then recording data like height, diameter, characteristics, and damage, and then taking a picture. To measure a tree’s diameter, I use a special tape measure that converts circumference to diameter. To measure a tree’s height, I use a laser rangefinder which calculates the height of the tree based on the distance to the tree and the angle to the top of the tree and the angle to the bottom of the tree. All this data will help students in the University of Michigan woody plants course practice their identification skills and provide more complete data for Matthaei-Nichols’ new enterprise geodatabase.

The enterprise geodatabase is a digital way of storing maps that consist of GPS coordinates, locations, and data related to those locations. This is really useful for Matthaei-Nichols because the Gardens and the Arb are living museums. We have plants from all over the world that are of interest to researchers and scholars. Through the years we have kept detailed records of planting. We have data about Michigan ecosystems and native flora and fauna. The enterprise geodatabase makes it easy to consolidate all this data into one place. This will make it easier to know what plants we have and where they are. 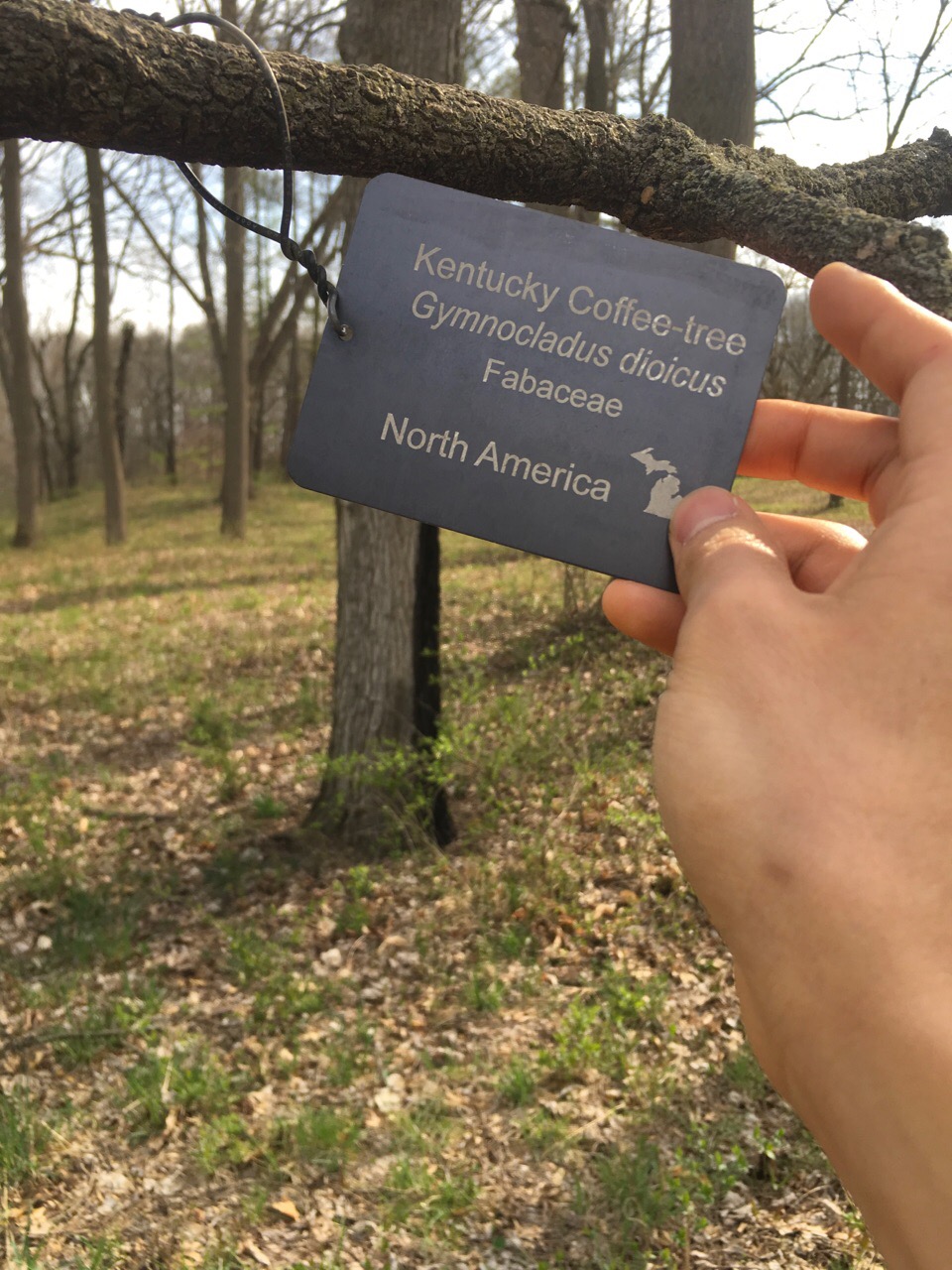 An example of a tree with a label. 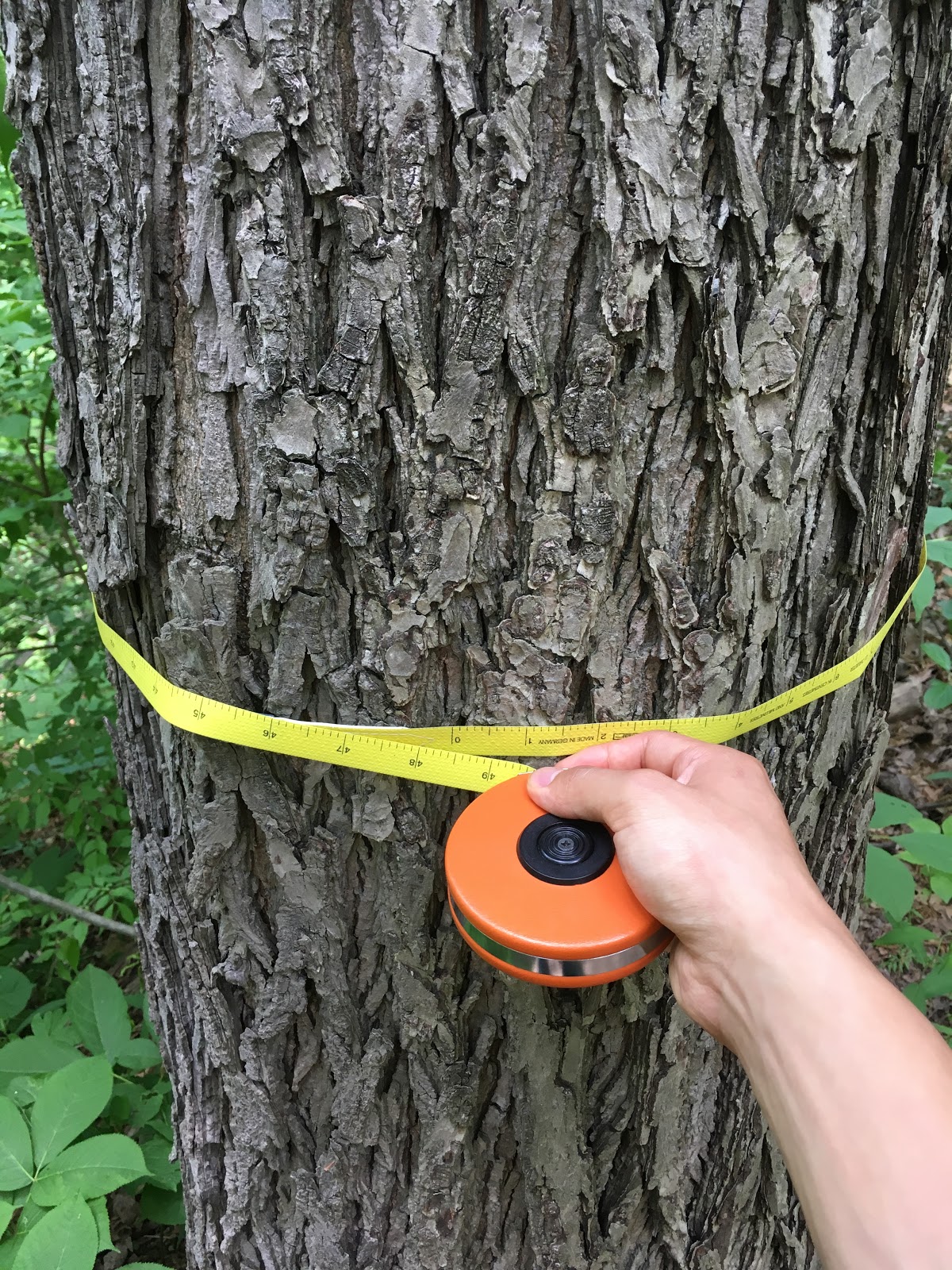 Measuring a tree’s diameter using a special tool that converts circumference to diameter. 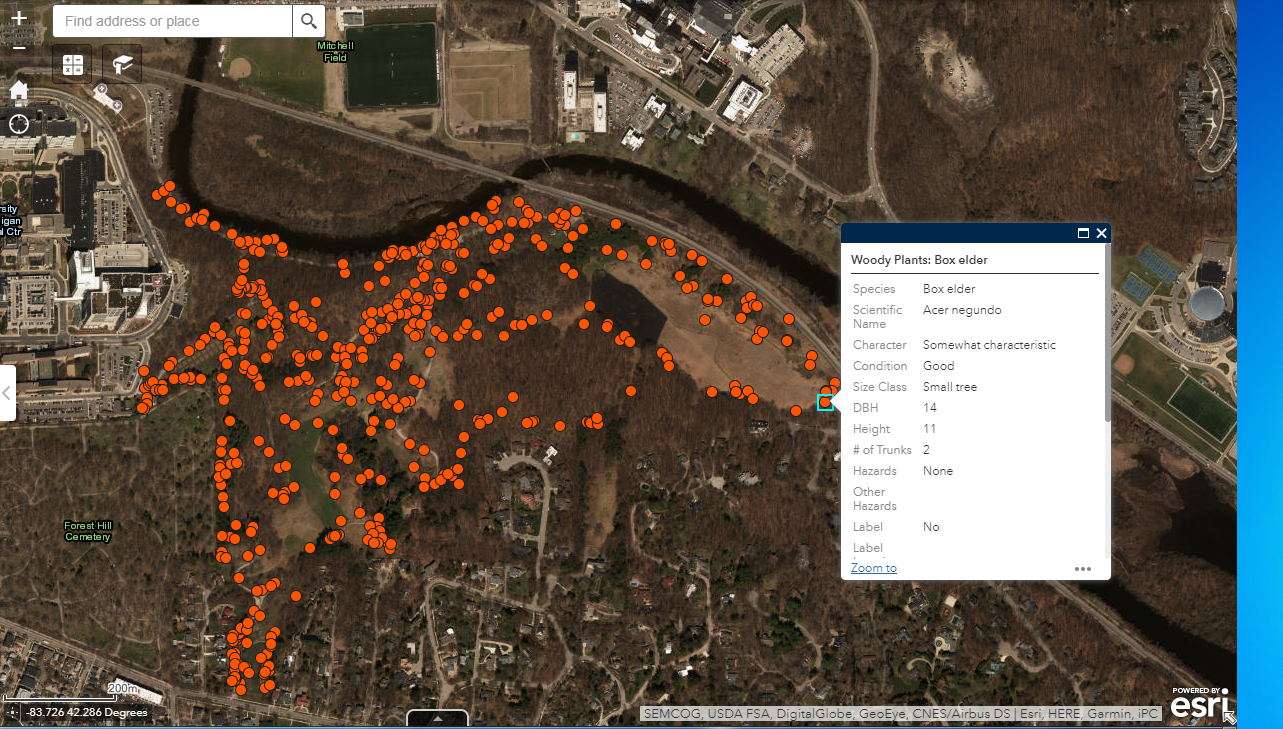 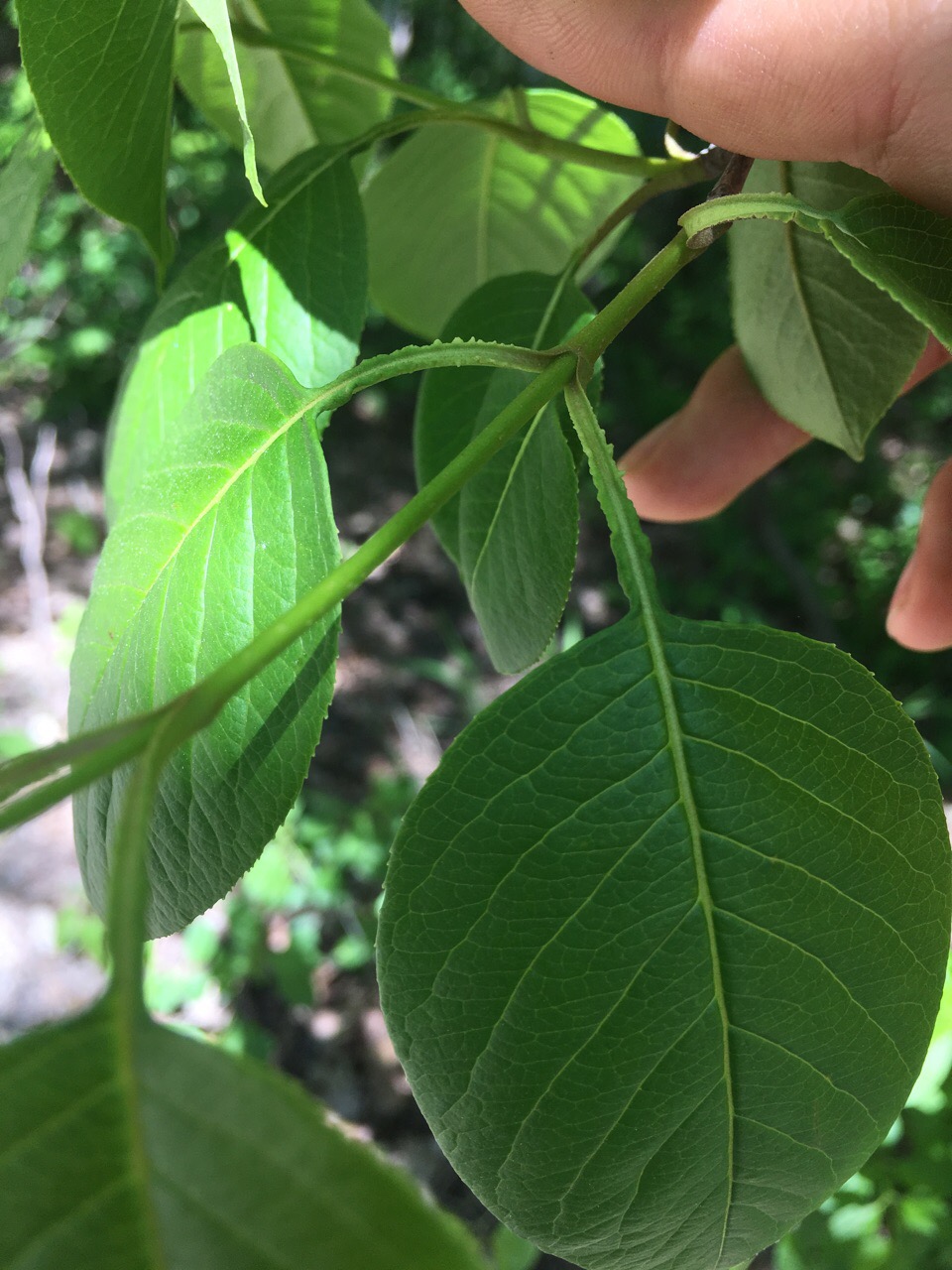 Nannyberry (Viburnum lentago) has a characteristic bumpy, winged petiole. The petiole is like the stem of the leaf.

The GIS data I am collecting about woody plants will also provide examples for students in the woody plants class to study. The class is cross-listed in the Ecology and Evolutionary Biology department, Program in the Environment, and School for Environment and Sustainability (EEB 436, ENVIRON 436, EAS 436). You can see the course listing here. In the class, students learn to identify over 130 trees, shrubs, and vines found in Michigan. These include native species as well as several common invasive and non-native plants that have established in this area.

Students can access the maps of woody plants on their cell phones and walk around the Arb to practice their plant identification. I took the woody plants class two years ago and learned to identify all these weird and wonderful plants. I think this will be such a useful tool because now I can easily find specific species that I need to practice, or just figure out what a certain tree is out of curiosity. You can view the final interactive map here.

My work builds off the efforts of past summer interns and volunteers that have spent countless hours collecting data. Our goal is to have at least five examples in the field of each plant so that there are multiple locations for people to study. Now we have 534 examples of 117 woody plants species in the Arb that are identified and mapped, but I am sure there are still more species that we have not found!

You never know what you will find in Nichols Arboretum. I thought I would never find any nannyberry (Viburnum lentago) in the Arb, but one morning as I was walking by the boardwalk I happened to notice a leaning tree and looked at its leaves more closely. I saw the characteristic winged petioles that indicate nannyberry. I noticed it had lots of small white flowers and as I was walking along Nichols Drive later that morning, I began to see the same white flowers. The flowers were like neon lights pointing to the nannyberry and I could see it from quite far away. Then I got up close, checked the petioles, and sure enough, it was nannyberry. I have discovered many examples of species in surprising locations. Plant identification makes you see the Arb so differently! 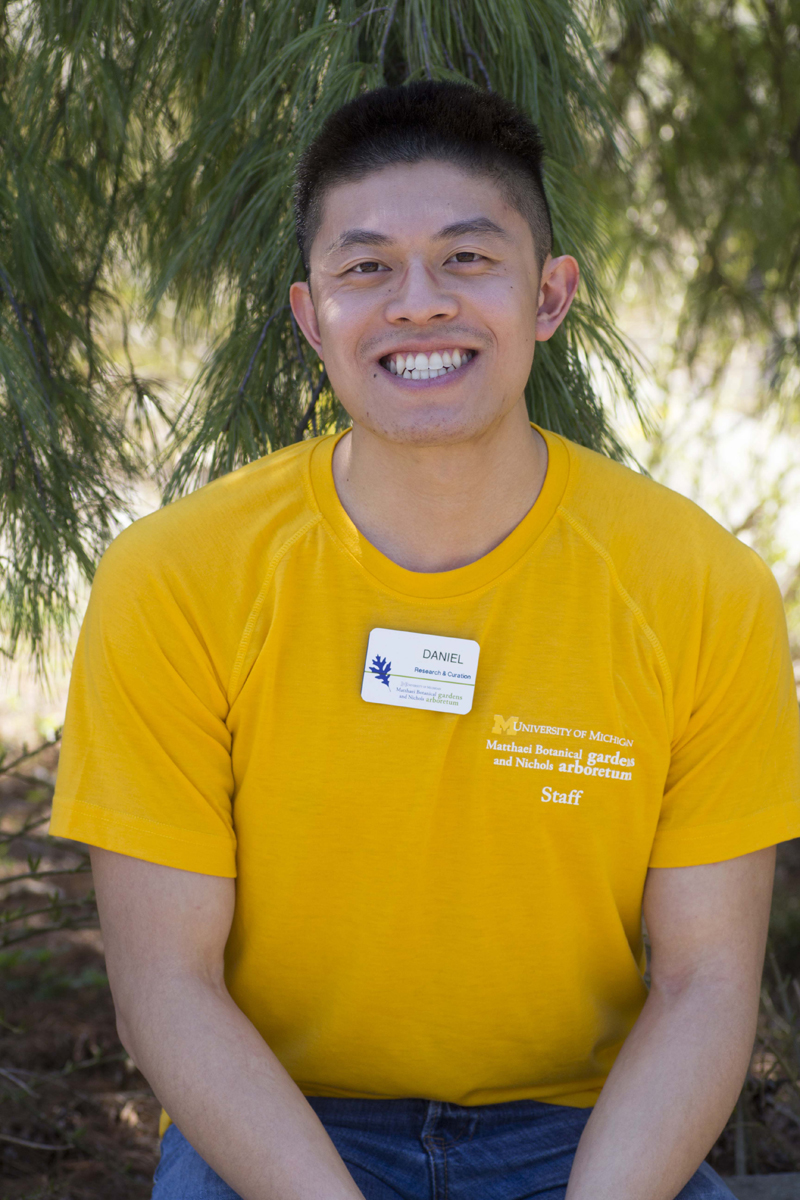 Daniel is from West Bloomfield, Michigan, and just finished his senior year at the University of Michigan. He is studying ecology/evolutionary biology and computer science. This summer he is a research and curation intern, working on GIS projects with Matthaei-Nichols staff members Maricela Avalos and Mike Kost. He is excited to get to know the trees and birds in the Arb and to learn new skills. Daniel’s internship was made possible by a gift from Paula Piehl that will help further studies of natural history, the preservation of ecological biodiversity and to encourage the study of rare and endangered species.