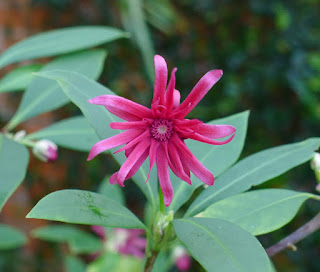 Not just another pretty face, beyond its vivid red flowers Florida anise holds some surprises.
It’s also called “stinkwood” or wet-dog bush because the flowers have a disagreeable, fishy smell. The crushed leaves however do have a citrus or anise-seed aroma. But the leaves are toxic for human consumption, so it’s not a substitute for the related star anise. Florida anise is now listed as endangered in Georgia, one of the four southern U.S. states in which it is native, to according to the USDA.
The related star anise, used in some Asian cuisines, contains the same substance as the botanically unrelated aniseed (Pimpinella anisum ), which is commonly used in western cooking. Star anise (I. verum) is the major source of the chemical shikimic acid, which is used to synthesize the anti-influenza drug found in Tamiflu.
Confused?
Florida anise: pretty but toxic
Star anise: edible fruit used in ASian cooking
Aniseed: Edible seed used in western cuisine
What would we do without plants?!