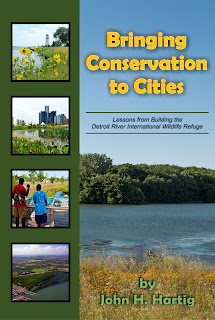 Bringing Conservation to Cities is the story of building North America’s only international wildlife refuge in a nearly seven million person urban area that also represents the automobile capitals of the United States and Canada (i.e., Detroit, Michigan and Windsor, Ontario metropolitan area). It presents unique insights into how innovative public-private partnerships are making nature part of everyday urban life in an effort to develop a conservation ethic. The percentage of people in the world living in urban areas has increased from 29% in 1950 to 54% in 2014 and is projected to increase to 60% by 2030. Today, nearly 80% of all Americans and Canadians live in urban areas. Most urban residents are disconnected from the natural world. Therefore, there is growing interest in re-connecting urban residents with nature. Compounding this problem is the fact that most conservationists avoid cities and want to work in pristine or wilderness areas. Furthermore, when scientific assessments are made, most urban areas are found to be too degraded to rank high enough on conservation priority lists. Bringing Conservation to Cities is a timely and informative expose of what it takes to foster a conservation ethic in a major urban area, complete with critical lessons learned, and to simultaneously inspire and develop the next generation of conservationists that must be developed with increasing frequency in urban areas because that is where most people on our planet live. If you are interested in exploring this new urban conservation frontier, one that has numerous challenges and opportunities, and in fostering more urban conservation initiatives throughout the world, than Bringing Conservation to Cities is a must read.
Dr. John Hartig is trained as a limnologist with 30 years of practical experience in environmental science and natural resource management. He currently serves as Refuge Manager for the Detroit RiverInternational Wildlife Refuge. From 1999 to 2004 he served as River Navigator for the Greater Detroit American Heritage River Initiative established by Presidential Executive Order.
Prior to becoming River Navigator, he spent 12 years working for the International Joint Commission on the Canada-U.S. Great Lakes Water Quality Agreement. John has been an Adjunct Professor at Wayne State University where he taught Environmental Management and Sustainable Development. He has authored or co-authored over 100 publications on the Great Lakes, including co-editing two books. John has received a number of awards for his work, including the 2003 Anderson-Everett Award from the International Association for Great Lakes Research and the 1993 Sustainable Development Award for Civic Leadership from Global Tomorrow Coalition.