A collection of bonsai satsuki azalea and Chinese viewing stones is on display at the University of Michigan Matthaei Botanical Gardens June 8-22. The azaleas and stones are from Dr. Melvyn Goldstein, a University of Michigan alumnus, bonsai collector, and donor. Among bonsai artists, Goldstein’s private collection is recognized as one of the finest in the United States.

A workshop with a Japanese bonsai master catalyzed Goldstein’s growing passion for satsuki, and he soon began to acquire exhibition-quality plants. Satsuki azalea are one of the most popular and prized species used for bonsai in Japan and have been so there for at least 400 years, according to Goldstein. There are thousands of varieties of satsuki with variations in flower color and leaf shape and size. When in bloom, the satsuki azalea may show multiple colors of flowers on the same plant. Like bonsai made from other woody plants and trees, satsuki azalea offer a glimpse of trees and nature in miniaturized form. (Story continues below, with image gallery.) 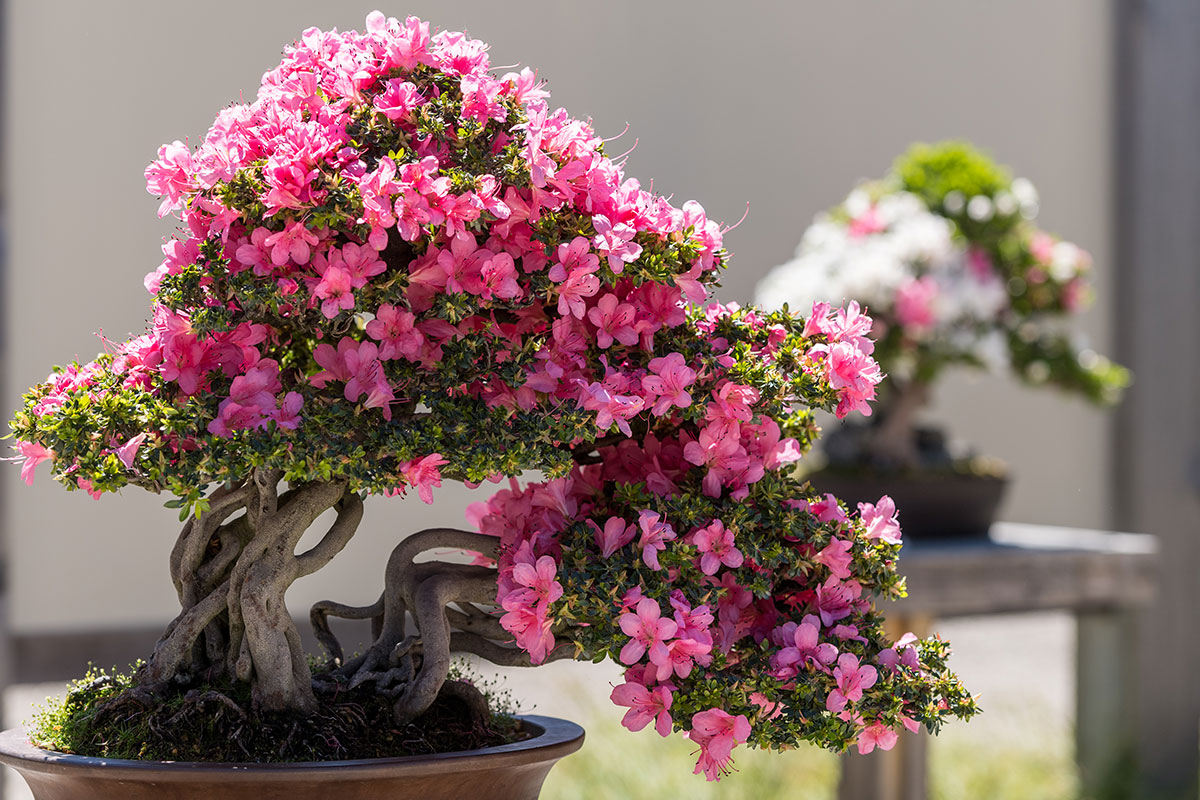 One of Melvyn Goldstein’s satsuki bonsai azalea. The blooming azaleas from Dr. Goldstein’s colllection will be on display at Matthaei Botanical Gardens from June 8-22, 2019. 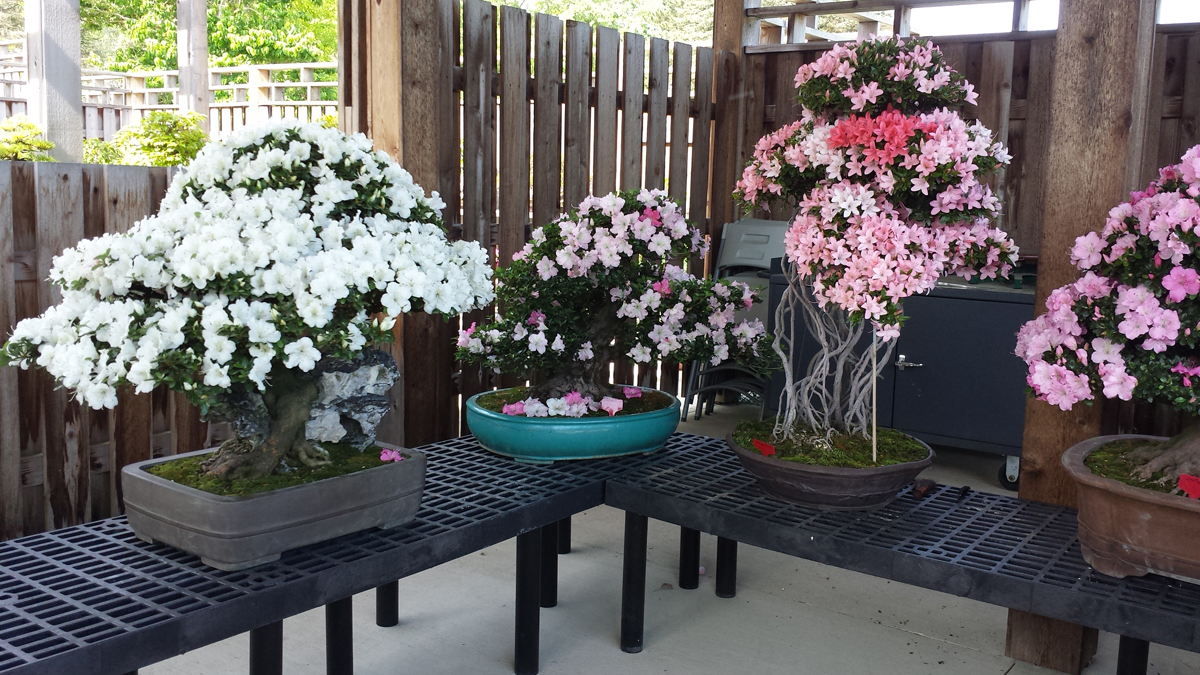 A group of Satsuki azalea being prepped for installation in the Bonsai in Bloom display.

Read interviews with Dr. Goldstein and other bonsai experts 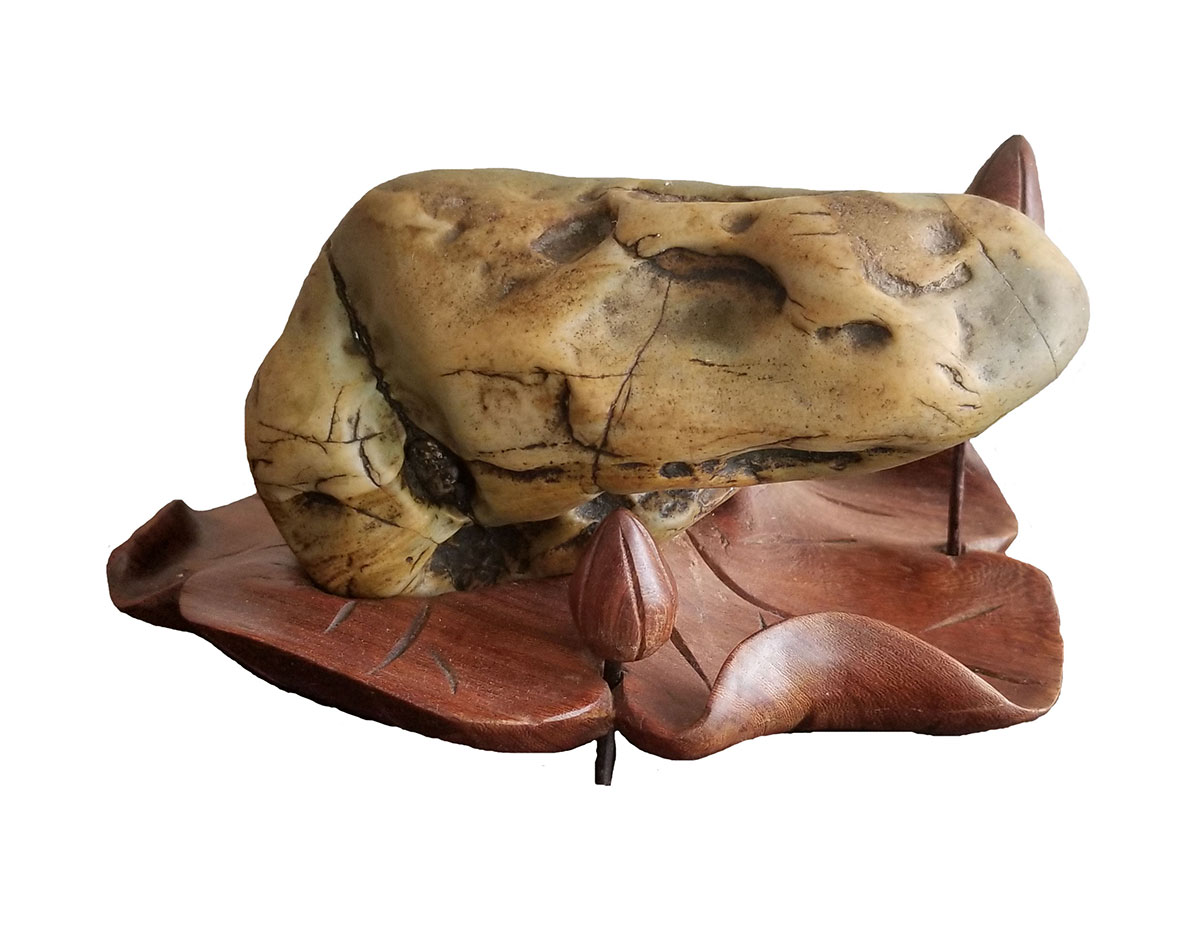 Above: A viewing stone from the collection of Melvyn Goldstein. This stone resembles a frog, with the base carved in the shape of a lotus leaf.

The tradition of viewing stones began in China and eventually moved to Japan. The Goldstein collection comes from China. Collectors prize the stones for their natural shapes that evoke landscapes such as waterfalls, mountains, or islands, or that represent objects such as birds or frogs. The stones are found in nature as is and are not worked at all.

Special events took place on Saturday and Sunday June 8 and 9. Shakuhachi flute player Michael Chikuzen Gould performed several recitals on Saturday. Gould last visited Matthaei in 2016 for a performance on the flute made from the stalk of the 80-year-old agave that bloomed here in 2014. Other events included a tea ceremony and three bonsai azalea workshops on Sunday.

In collaboration with the University of Michigan Center for Japanese Studies, Bonsai in Bloom is part of Japan Week in Ann Arbor.

To learn more about Goldstein and his collection and how his connection to the University of Michigan inspired his passion for bonsai, read the full story on our blog. 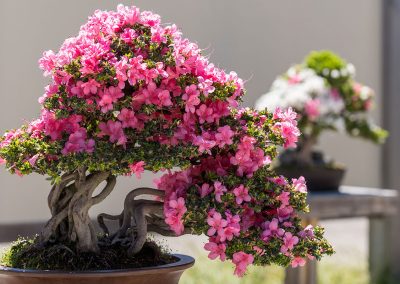 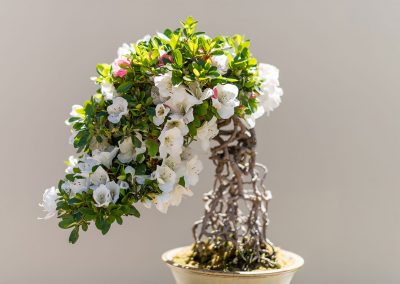 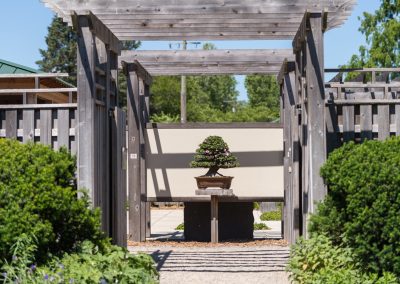 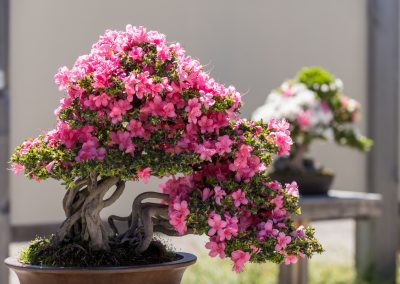 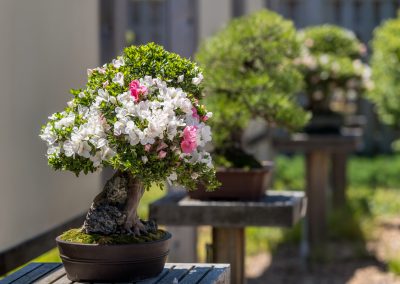 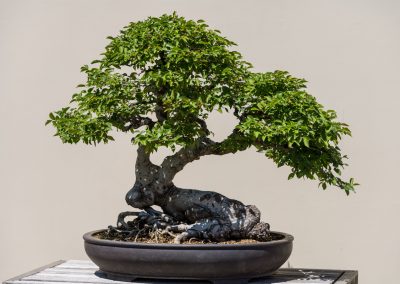 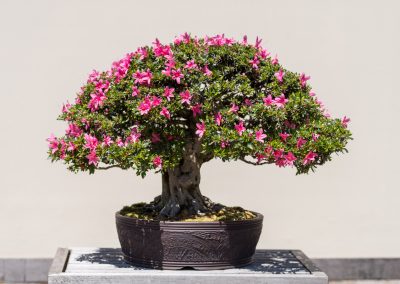 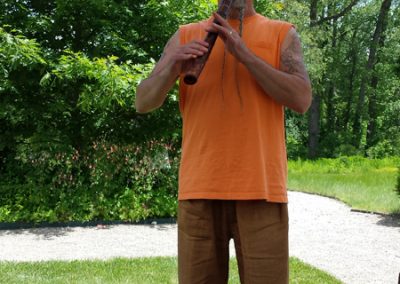 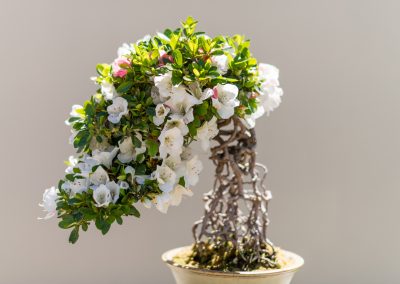 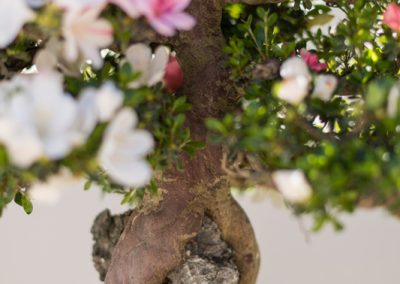 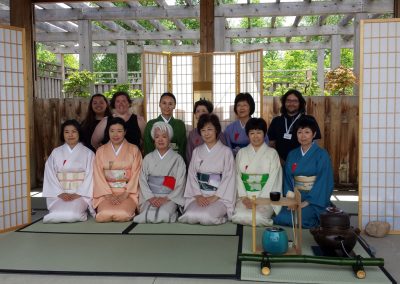 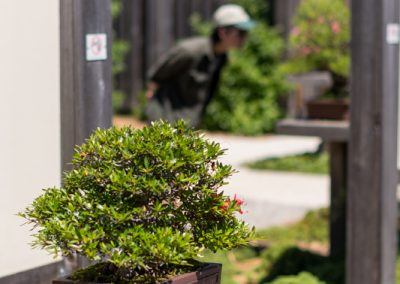 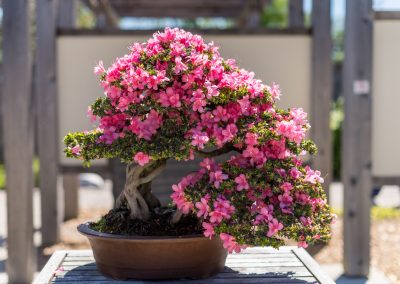 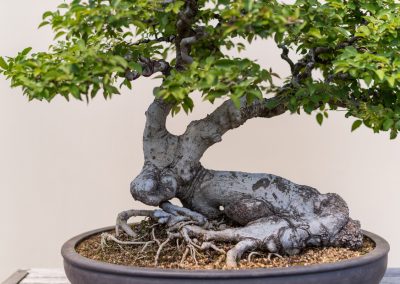 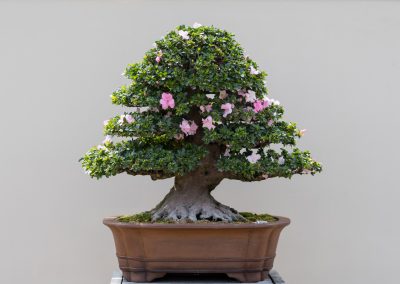 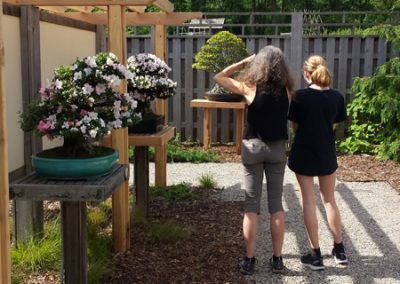 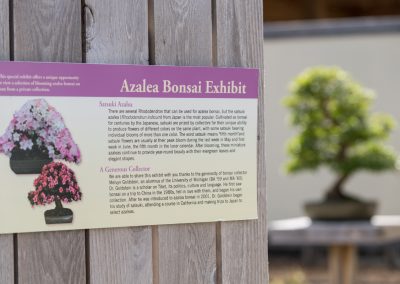 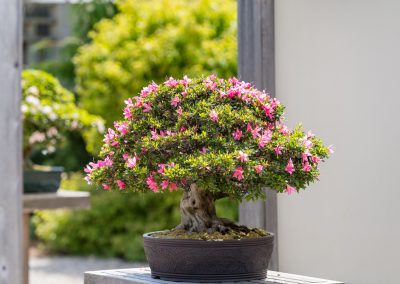 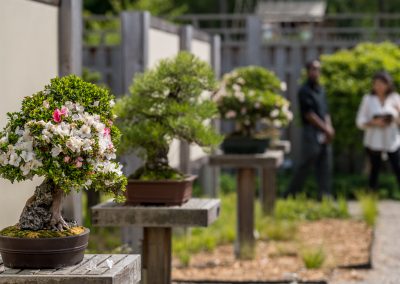 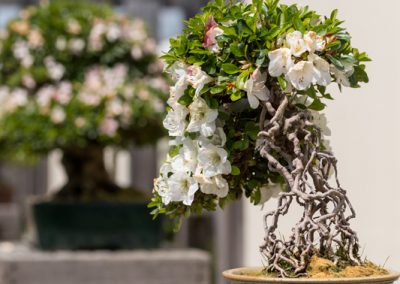 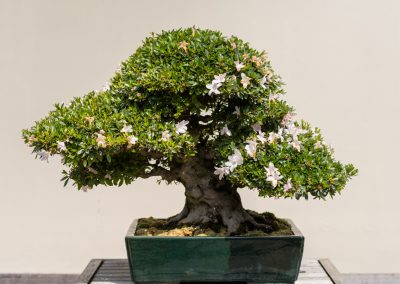 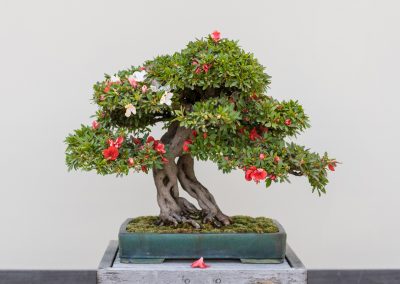 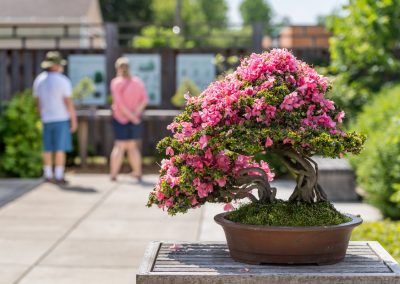 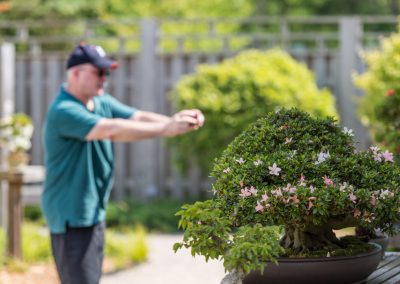 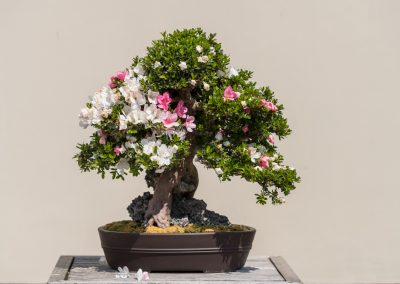 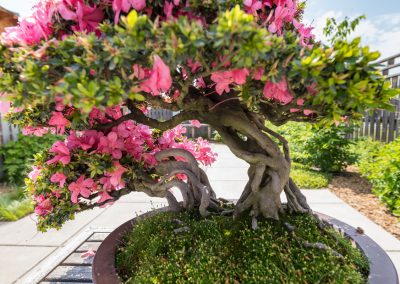 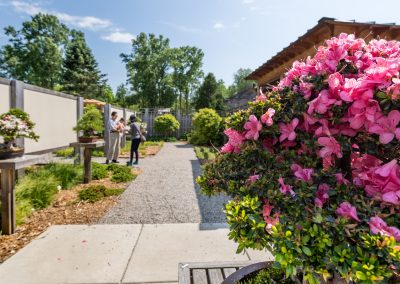