Bonsai artist David DeGroot reshapes not just some of the plants themselves in the Matthaei-Nichols collection, but how we look at them
Matthaei Botanical Gardens & Nichols Arboretum recently invited bonsai expert David DeGroot to conduct a multi-day session of bonsai care, pruning, and instruction. DeGroot retired in 2014 after 25 years as curator of the Pacific Rim Bonsai Collection in Federal Way, Washington, where he tended a collection of more than 120 trees. David is author of Basic Bonsai Design (Basic Books) and the forthcoming Principals of Bonsai Design. Today he travels extensively, lecturing and giving bonsai workshops for gardens and other organizations with bonsai collections.

We hired DeGroot as a consultant to guide us, over the course of several years, in the care and styling of our bonsai. DeGroot’s long experience in the art of bonsai will “bump us up to the next level,” says Carmen Leskoviansky, Matthaei-Nichols collections and natural areas specialist. “We have good trees, she adds, “but we wanted a professional eye to critique our work and give advice on where to go and how to maintain some of the trees that have really reached a peak in their design where we’re uncertain how to move forward. David will provide us with the expertise and encouragement to make some big changes that will result in lovely, artful bonsai.”

For three days in late April 2015 DeGroot—along with members of the Ann Arbor Bonsai Society and local bonsai artist and teacher Jack Wikle—circled around, discussed, pruned, and examined many of the trees in the Matthaei-Nichols collection.

For this bonsai greenhorn observing the action from the sidelines, the progress and results were surprising, even unsettling. At certain points the floor was littered with branches as DeGroot applied his technique. “Less is more,” DeGroot said of a yew tree that he and Jack Wikle were working on. Before DeGroot began work on the yew it was about two and half feet tall and a bit shaggy, with a bare trunk that recalled a well-aged tree. “But we’re keeping the bones of the tree,” DeGroot comments as he continues his work. When asked the question, how do we know when the tree is ready to display, DeGroot observes, half seriously, “When it looks nice!” DeGroot went on to say that for this yew he was setting some basic structure, and the refinements would come later.

This particular yew has deadwood (shari) and a hole in the trunk. The hole was purposely created some years ago. Bonsai is art, and all art is subject to the whims of fashion. Today such trunk holes are out of style. To freshen the design while respecting the tree and its basic form DeGroot pulled some of the branches down with wires, creating a new front viewing point for the tree. He also tilted the tree a bit forward.
Moving over to a Japanese beech DeGroot worked with Wikle to recreate the look of the tree as it would be in its natural setting. “A large part of our discussion concerns the crown of the tree,” DeGroot observes. “Many trees have a characteristic juvenile leader so the tree puts its energy into the trunk’s apical terminal. At some point a trigger happens where branches will bolt and the tree starts taking on a rounder appearance. So for this beech, the low branches are emerging as they should be, including the crown, which needs to be rounded and not pointy.” 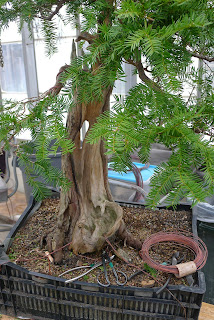 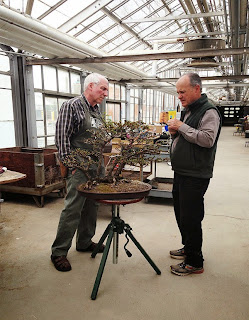 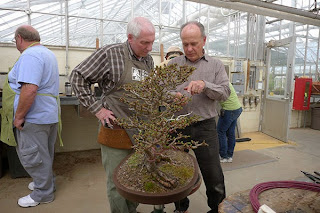 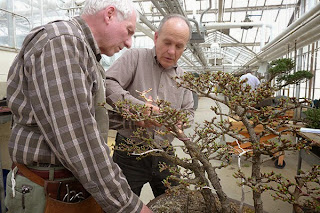 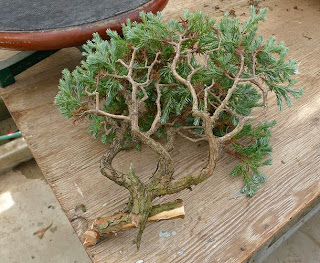 In one way the art of bonsai is about recreating the forms of nature in miniature. When looking at a bonsai tree the casual observer may not appreciate the many hours and in some cases decades of careful management required to imitate what nature seems to do so casually. DeGroot compares the training and care of a bonsai to an athlete in training. “We’re taking the tree to its limits but at the same time giving it the best possible care. Just as many athletes push themselves to new limits to achieve amazing goals we’re pushing this beech, stressing it, to give it the incentive to create more growth.”

In time DeGroot’s artistry will take shape as the bonsai he worked on evolve. “It was fun and refreshing to have someone so bold and enthusiastic help us make some real art pieces,” Leskoviansky says.  “I’m excited to see what the future holds for our collection!”