Shore flies and fungus gnats, beware. You’re on the Matthaei-Nichols hit list of unwanted insect pests in the greenhouses and conservatory at Matthaei Botanical Gardens.
Pictured sticking to the card are mostly shore flies and fungus gnats. The tiny creatures are so named for their affinity for moist areas, perfect breeding grounds for algae and fungus, according to horticulture manager Mike Palmer. Flies are attracted to the yellow color on the cards, which are coated with a non-drying, sticky substance. Once the flies alight, they’re stuck. The cards betray the presence of these pests and are another weapon Matthaei-Nichols staff use as part of an integrated pest management (IPM) program, says Palmer. 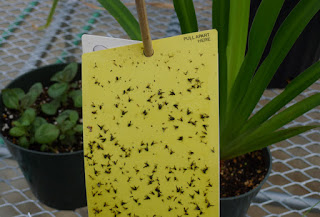 Besides the yellow cards, it’s standing water that really attracts shore flies and fungus gnats, and they both like moist organic matter, explains Palmer. “Soil that contains peat moss and is kept too moist is an ideal breeding ground for them,” he adds. Look for shore flies lifting in small clouds the next time you’re walking along the edge of a lake where algae collects.
While the adults of both shore flies and fungus gnats don’t eat much, the larvae do: shore fly young thrive on organic matter and algae, and fungus gnat larvae eat saprophytic fungus on the soil surface, as well as organic matter and the root hairs of plants, “so they can be pretty damaging,” says Palmer.  A saprophyte is an organism that lives on dead or decaying organic matter.
Shore flies and fungus gnats are almost always present in our greenhouse areas, says Palmer, but “we control them by letting the soil dry out on the surface of the pot, using the sticky cards, and making sure floor drains are clear. Clogged drains lead to standing water and the formation of algae.”
Homeowners often find these greenhouse pests hitching rides on new houseplants. To control them says Palmer, let the soil of your new house plant dry a bit between waterings, try using yellow sticky traps (available at online merchants), and don’t let water stand in the saucer for any length of time. You can also replace or rough up the top layer of soil in a pot. This helps remove some of the larvae and gives the soil a better chance to dry out, making the environment less hospitable for larvae survival.