140 Years of Weather: the Highs and Lows of Observational Meteorology and the Weather Station at Matthaei 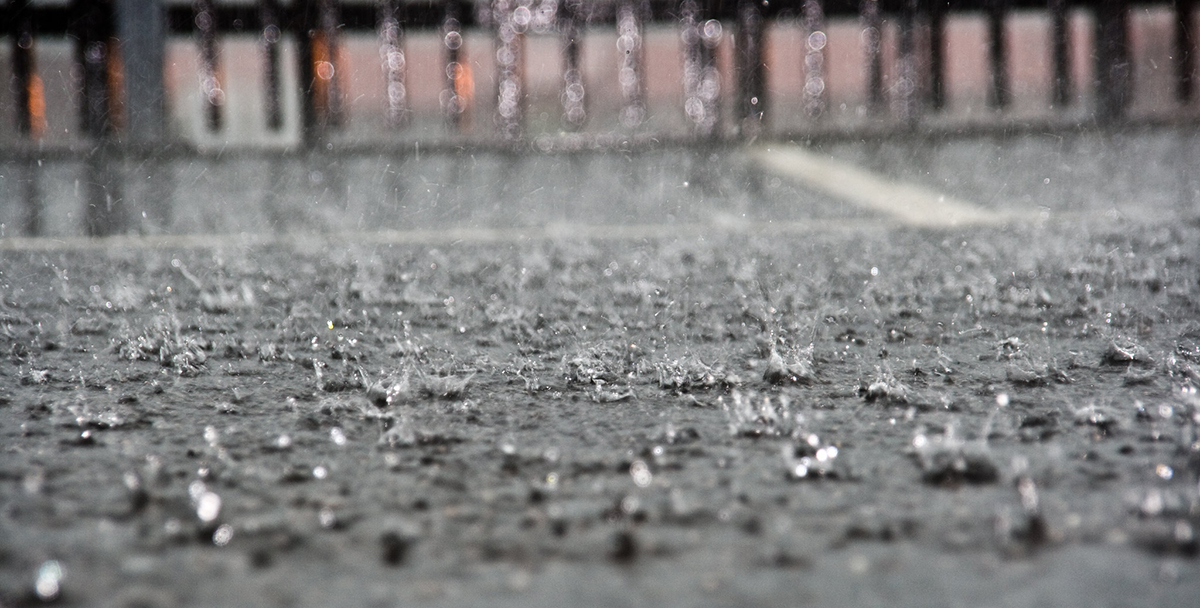 Neither snow nor rain nor heat nor gloom of night prevents weather observer Dennis Kahlbaum from measuring the weather. At 7 a.m. and 6 p.m. every single day, seven days a week, Kahlbaum takes in-person readings at the University of Michigan Climate and Space Department weather station located at Matthaei Botanical Gardens. Those observations are then reported to the National Weather Service (NWS).

We caught up with Kahlbaum, a University of Michigan meteorologist and weather observer with the Climate and Space Department (UM CLaSP) to inquire about his work and to learn more about the weather station.

Kahlbaum shed light on the station’s extensive and illustrious history. It originated at the University of Michigan’s Astronomical (“Detroit”) Observatory, on January 1, 1880. Professor Mark W. Harrington, the observatory’s first director, made important contributions to the field of meteorology, founding the first American meteorological journal, and going on to head what is now known as the National Weather Service in 1891. With continuously recorded measurements for over 140 years, the Matthaei weather station has one of the longest and most complete sets of weather records in Michigan and the Great Lakes region.

Relocated four times, the station was at the observatory for 64 years, the Geology Building for 12, East Engineering Building for 18, Space Research building for 43, and at Matthaei since 2017. As Kahlbaum notes, it has always been within 3.75 miles of its starting point. 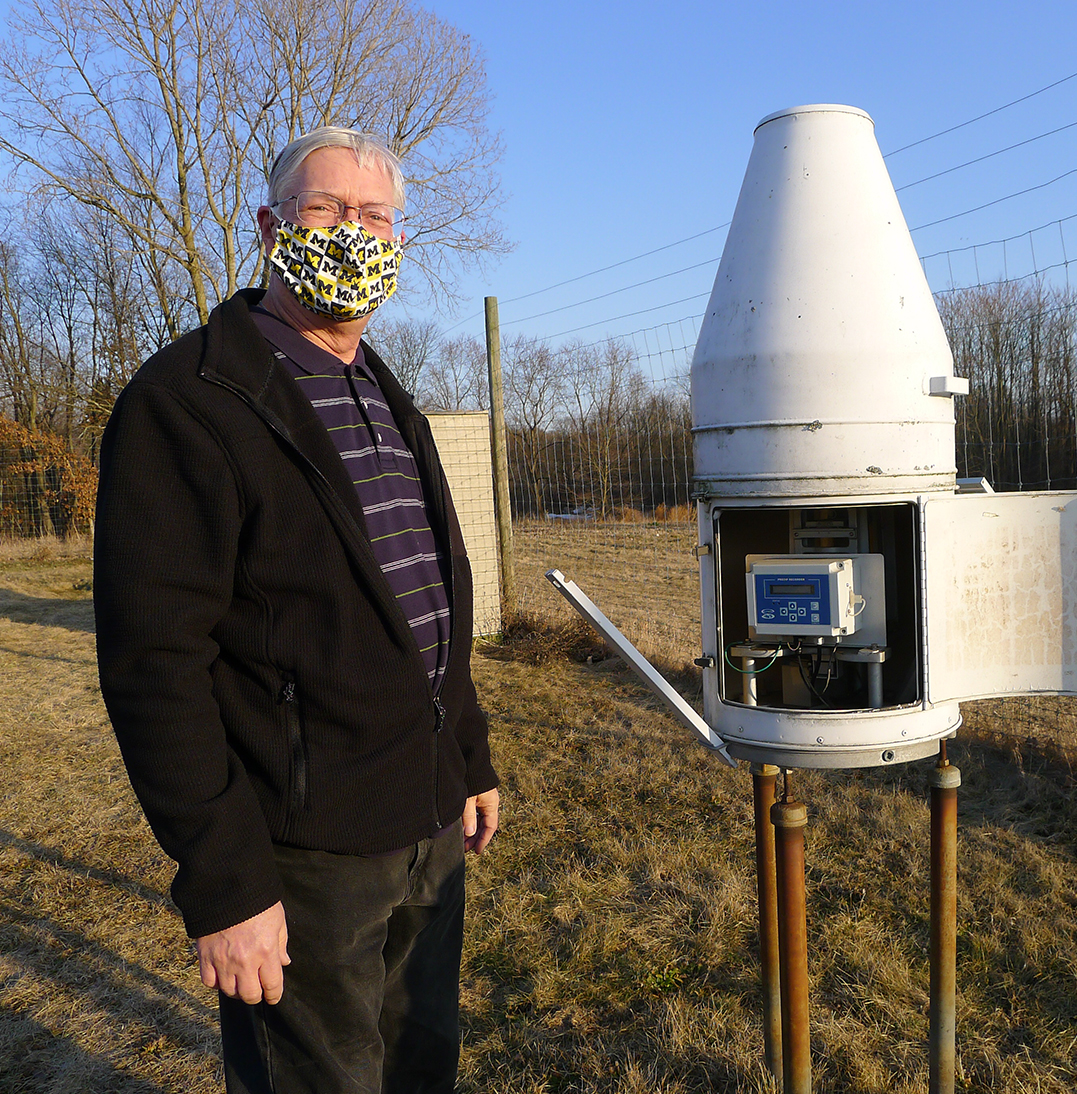 Dennis Kahlbaum stands in front of the Fischer-Porter Recording Precipitation Gage. According to the National Weather Service, the gage was originally a kind of weighing rain gage that translated the weight of water in a bucket into a water equivalent amount in tenths of an inch. A paper tape was punched every 15 minutes with the level of water in this bucket, and 15-minute precipitation was determined by the change in the bucket level between punches. Now the gauge works electronically to track observations to a hundredth of an inch, which are downloaded onto a USB flash drive and emailed to the NWS, which shares the data with the National Centers for Environmental Information. 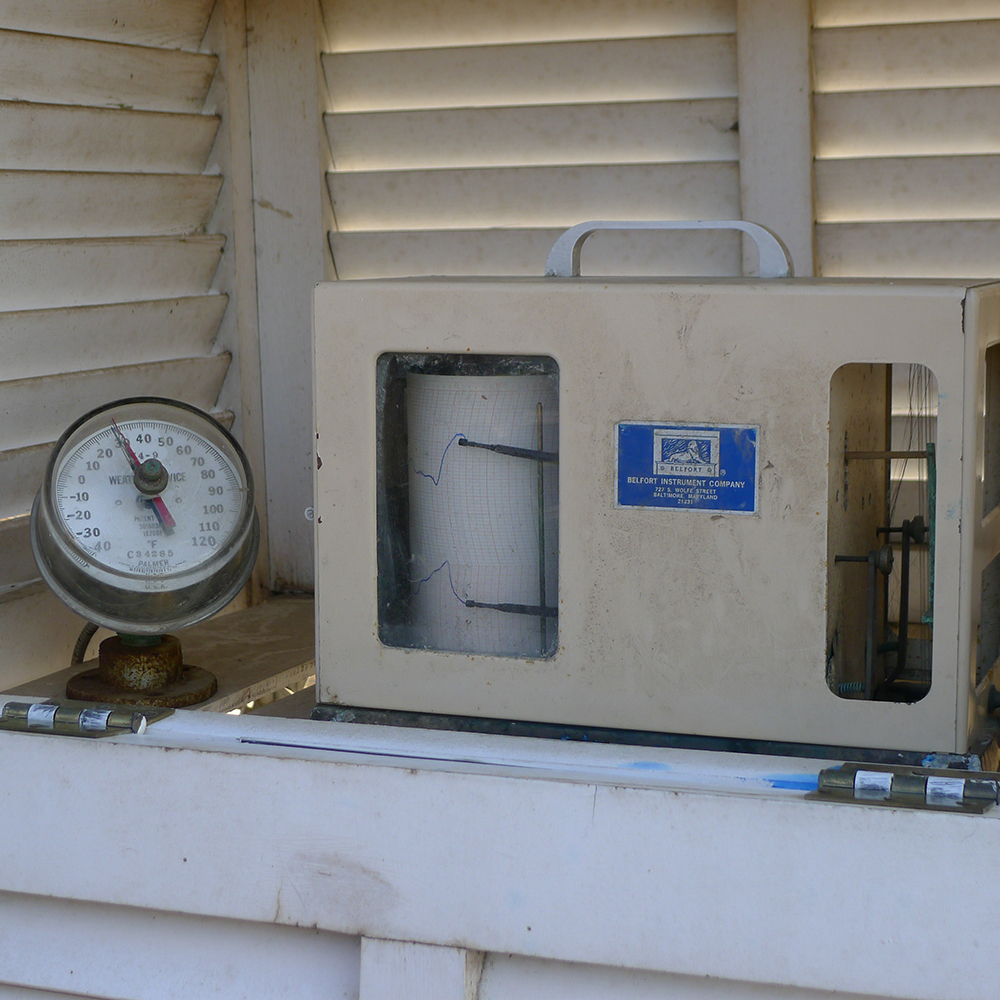 Read more about the rain gage

Inside the COOP
The station is one of 8,700 COOP outposts, the National Weather Service’s Cooperative Observer Program, begun in 1890. COOP has two main goals: 1) to provide observational meteorological data required to define the climate of the United States and to help measure long-term climate changes; and 2) to provide that data in near real-time to support forecast, warning and other public service programs of the NWS. Almost all COOP weather observers are volunteers, donating their time and service to the program.

Because of its longevity, data length, and integrity, the station is also part of the Historical Climatology Network (HCN), a subset of COOP, “having been selected according to their spatial coverage, record length, data completeness, and historical stability,” according to the National Oceanic and Atmospheric Administration (NOAA) website. Stations must have 80 years of temperature and precipitation data and have been active in 1987 to be eligible for inclusion. HCN stations were initially created to help assess and detect regional climate change. Data are used to quantify national- and regional-scale temperature changes in the contiguous United States, according to NOAA.

Kahlbaum described the weather instruments used at the station as “old school,” meaning, “they are manual: mercury-in-glass thermometers, ‘stick’ precipitation gauges, etc. Changing the instrumentation to modern equipment might have an impact on the readings,” he explained.

Why Matthaei?
What are the advantages of its present location at Matthaei? First and foremost, it ensures a stable site that will remain relatively free of human-built structures that could negatively impact the readings. When moved to Matthaei in 2017, then-director Bob Grese noted our collective enthusiasm about hosting such a storied weather station. “As someone who’s used historical weather data in my own research, I’m delighted to have the weather station at Matthaei Botanical Gardens. Having accurate local climate data clearly enhances the value of our property as the setting for field research,” Grese remarked.

The daily observations are condensed into a monthly report, which is then shared with numerous interested parties, including 10 University of Michigan departments; Ann Arbor government, schools,  and library; Washtenaw County Drain, Road and Emergency Operations; Huron River Watershed Council; the National Weather Service; and more.

Did you know that during a snowstorm, readings are taken every hour?! Kahlbaum noted that these are some of the most challenging readings: assessing snow depth and snowfall during windy and/or mixed (frozen/liquid) precipitation events.

Schools, road crews, accident investigators and others look to hourly weather reports to aid in their decision-making and investigation. Data is often needed by U-M researchers doing field work at Matthaei, and vitally informs staff work and planning–for example, when heavy recorded rainfall impacts trails. While Ann Arbor-area weather that you might hear about on the news comes from data collected at the weather station on the south side of town at the airport, it can vary from the readings at Matthaei.

The Detroit Observatory on the University of Michigan campus. The weather station originated at the observatory, on January 1, 1880. Photo: Bentley Library. 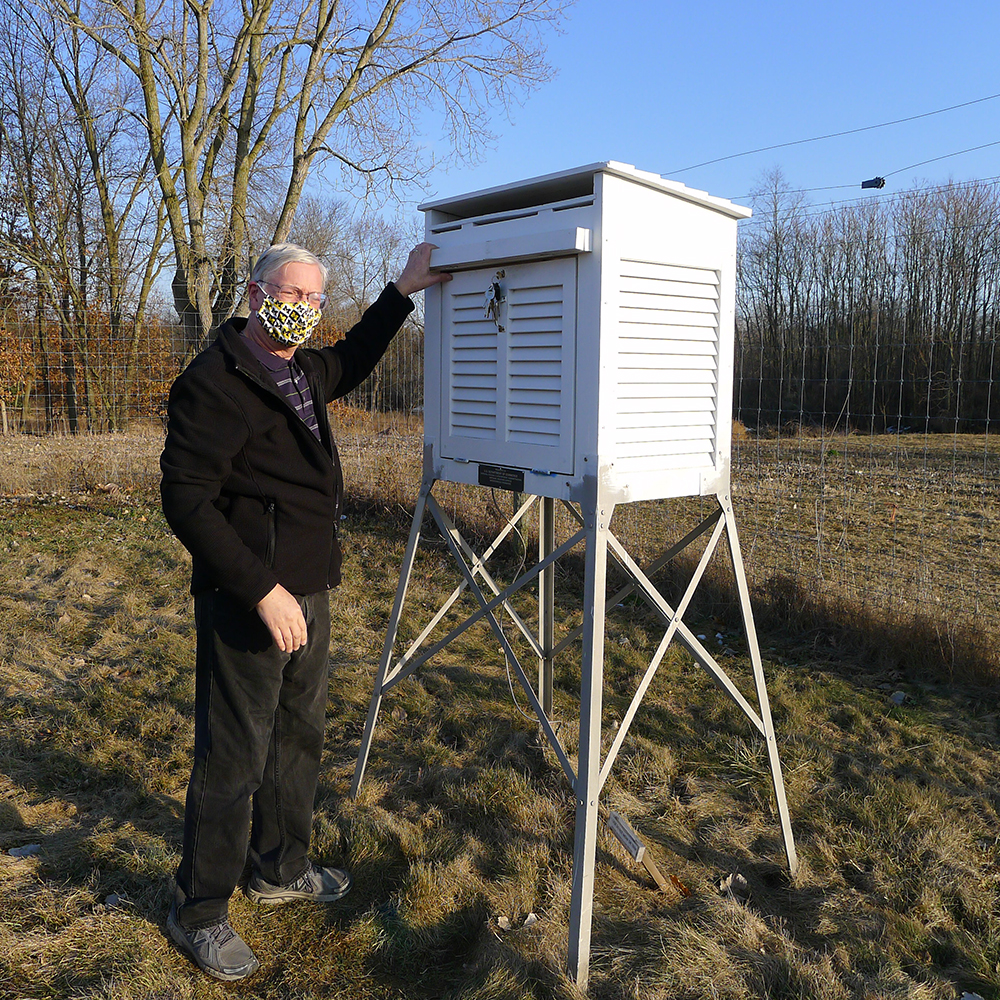 Dennis Kahlbaum in front of the instrument shelter (a ventilated box called the Cotton Regional Shelter, so named for where they were first used), which houses the maximum/minimum thermometers and recording hygrothermograph.

Weather whys
When asked how he became interested in the weather, Kahlbaum shared that he’s been enthusiastic about the weather since he was a 7th grader in Carleton, Mich. Having purchased weather instruments in his teens, he then recorded observations for his hometown.

We all have recollections of unique or distinct Michigan weather experiences, the proverbial “if you don’t like the weather, wait 5 minutes!” Kahlbaum shared some of his weather extremes: “As expected from living in the southeast Michigan climate, I’ve witnessed a (small) tornado, “green sky” thunderstorms, 1- to 2-inch hail, high winds, near blizzard snowstorms, deep snow, torrential rains, flooding, drought, temperatures over 100ºF and below -20ºF, etc.”

The extremes
What are some interesting weather notes over the last 12 months? In case you’re wondering about our wintery-est week, it looks like February 14-20 wins that award: with 11.8 inches of snow, and a new record low of -16℉, breaking the old record of -14℉ set in 1885! February 2021 was also the 10th snowiest since records began in 1880.

Do you recall some warm days in early November? The weather station recorded record-breaking highs four days in a row. This chart from Mike Palmer, Matthaei research coordinator, shows what year the old record was set (now broken): 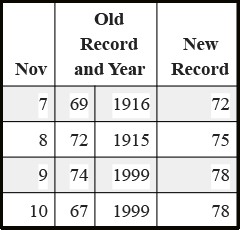 Check it out!
To check the 7 a.m. observations for the weather station, named “123M4: Ann Arbor” in the top-most table, take a look at

Curious about the coming spring? According to the

this spring (April-May-June) is expected to have a 40% chance of above normal temperatures and above normal precipitation.

Kudos to Kahlbaum
Dennis Kahlbaum received the John Campanius Holm Award from NOAA, the highest civilian award conferred by the organization. Named for the Swedish weather observer who became the first to collect weather in the American colonies in 1644, the award recognizes outstanding accomplishments by cooperative weather observers.

We’re certainly grateful for Kahlbaum’s considerable commitment to weathering the weather to measure the weather.

In a normal year, author Katie Stannard coordinates and onboards the summer interns at Matthaei-Nichols, and she helps the visitor engagement team run the visitor center at Matthaei. Katie’s helping interns onboard this year, and she’s also been posting on our social media and writing insightful blog posts like this one.

Katie received her Master Gardener certification in 1999, and has years of experience with heirloom flower bulbs and small business operations. She is passionate about encouraging kids of all ages to “go outside!” and explore the natural world. Her current gardening interests include children’s gardens, native plants, and everlasting yet nonintrusive perennials. Katie volunteers for her kids’ school, for Carleton College as an alumni volunteer, and in her neighborhood to organize community events. She holds an M.A. from Carnegie Mellon University in literary and cultural theory, and a B.A. from Carleton College in English.